What's That Beyond Those Cans of Inedible Cooking Oil? Oh, It's the Dreary Bathrooms at Theo's Kitchen 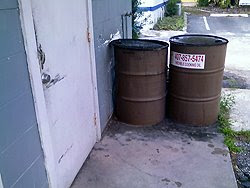 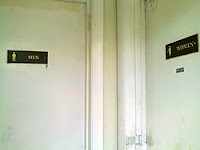 Not inside the eatery. Rather, go outside and around to the back of the place. After rounding the corner, you'll see some metal waste canisters containing inedible cooking oil. Go up to them. You'll see a door to the left. Go through and you'll find a short, dark and dank enclave, off of which both bathrooms are based. 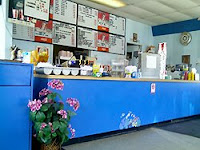 This homey neighborhood joint offers a unique mix of Middle Eastern street food and southern fried treats. That means the menu dishes up a mix of gyros and hummus alongside platters of fried chicken pieces and whitefish fillets. A strange mix, to be sure, but the quality is good (especially the chicken, which is some of the city's best; the gyros are decent too, as are the fries and Greek salad) and the prices are low, making it a perfect stop for a quick, affordable bite if you're in the area. 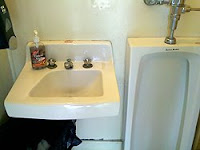 The inside looks like a standard southern diner, with Formica booths and tables and a front counter (with overhead menu) where you order from -- complete with surly hostess. A few Greek Orthodox icons sit about as well.

The clientele is varied: From hillbillies and construction workers to downtown hipsters to area employees -- all of which seems to flock to the place for its fried chicken and gyro sandwiches. For some reason, I find that refreshing.

The bathroom is a bit on the scary side, though -- as might be expected by its proximity to those cans of inedible cooking oil. They are tight, small dank environments with lighting that is too dim and a lack of ventilation. 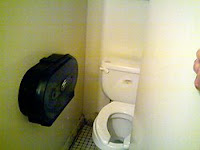 In fact, the men's room had an exhaust fan (that was off and looked like it'd been dormant for 20 years) just above the commode in the lone stall, but that was about it in terms of ventilation. This made the interior feel very humid and musky, almost swamp-like. In a way, it reminded me a lot of the toilets experienced at Kappy's in Maitland and the Waffle House in Walterboro, SC -- both of which felt a little to true to the spirit of the Deep South, if you know what I mean. 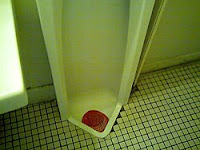 The walls here are covered in white drywall and the floor in white mini-tile -- though the dim lighting and gray areas here gave everything kind of a dreary off-white hue. Some of the floor tiles are chipped or missing in places as well.

Fixtures are your standard white, save for the urinal, which is one of those stretch jobs that goes down all the way to the floor (further proof that this place has been around a while). 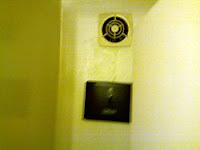 White it looks dreary, the urinal and toilet (in the place's lone stall -- and a tight-fitting one at that) are clean enough (the lighting, I think, is what makes it seem dirtier than it is). There are some water stains and patch marks on the wall.

The sink is another story: Some rust and scum around the perimeter and grout line and some stains in the sink itself, as well as some corrosion around the faucets. A lone soap pump sits on the sink, by the faucet (no vanity counter) and a non-functional paper towel dispenser hangs above it (a roll of towels was placed above it to dry your hands). 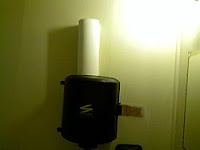 Odor-wise, it wasn't too bad -- just kind of musty because of the lack of ventilation, but nothing as bad as the Waffle House in Walterboro, SC or the horrid CVS Pharmacy bathroom in Savannah, GA.

3. Almost a 4, but that dim lighting and lack of ventilation drop that score down a bit.

I realize it's just a diner bathroom, but it could be a bit more. Add better lighting and ventilation, to make the place less oppressive and dark, and scrub it up a bit better and you're pretty much there -- at least if you want to keep your ambitions low.
at 14:53