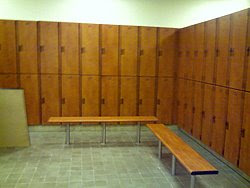 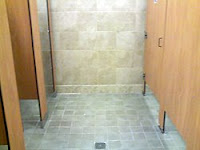 From the front entrance, go in and turn left at the reception center. Pass the center's store and you'll see the entrance to the bathroom (ladies' room) on your left. Go further down along that wall and you'll see the men's room.

Note: It's a large place, appx. 60,000 square feet, so be prepared to walk a bit (though not excessively) on your voyage. 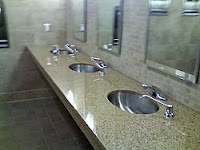 As stated, this is a mammoth complex filled with sprawling spaces, mirrored rooms, metal walls, textured floors, digital clocks, sleek corners, modernist art, affirmation statements and a pumping ongoing house-music soundtrack. Subtle it isn't, but it's also a gym, not a restaurant, so the place needs to exude positive energy from all angles. And that it does.

Of course, it should also be stated here that we received a sneak preview of the place before it actually opens, which will be at the end of October 2008, so not everything was up and running on our visit. The place's manager gave us a tour of the place, which included a tour of the women's bathroom/locker room (not the men's room). As such, the many of the machines weren't in place, little of the equipment was there, computers were not yet installed, the store had yet to receive any merchandise and construction workers were still putting the finishing touches on it. 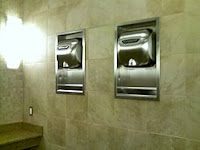 On the other end, the kiddie area looked nearly complete (and enticing) and the impressive indoor basketball court (which includes a full court and an additional half court) was just about finished. I'm not much of a gym goer (as you can imagine, I'm more of a bathroom goer) but as gyms go this was pretty.

And the same goes for the bathrooms/locker rooms.

These are sprawling multi-person environments -- some of the biggest I've seen outside of airports, to be honest. They have a somewhat labyrinthine floor plan, with plenty of twists, turns and enclaves, though not many open spaces outside of the changing area. It packs a lot into a large area. 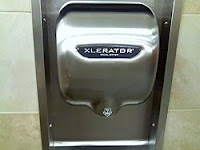 After entering, you come into the main locker room area, which houses a plethora of dark-wood-stained half-lockers (each made of well-stained fiberboard-styled wood?) and several benches (made of the same dark-stained wood) for sitting and to aid in changing. Beyond that, to the immediate left, is a multi-station sink area.

The sinks and fixtures are stainless steel and the counter granite -- a design we've seen before in such places as ULTA (though without the granite counter) and the Hermitage Museum in St. Petersburg, Russia (albeit dirtier and more makeshift) but never to such grand effect or in such grand scale. Above each sink is a mirror, one per station, which makes for a nice touch instead of having a stretch mirror accommodate all things. 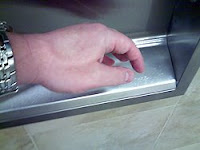 Also worth noting are the XCELERATOR air driers placed here -- about four or five in all and each one made of stainless steel. We've seen high-power hand driers before, especially in Europe (Le Roi du Pot au Feu and Monsoon Restaurant come to mind as immediate examples), but I've never experienced on that has generated as much air power as the one here. It literally rippled the skin on my hands when I used it -- which is both impressive and a little scary. 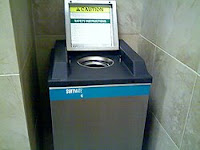 Granted, not as impressive as the hand driers at the London Eye ticket office toilets (which were just downright too cool for school) but impressive nonetheless.

Another nifty add-on is this device that looks like a paint can shaker -- it wrings out and dries your bathing suit in seconds, and was something else I found impressive and a little frightening.

The section behind the sink stations is where the toilets are. This is a deep hallway with about 10 or so commode stalls, each separated by dividers that are made of the same deep-stained wood as the lockers and benches. The toilets themselves are your standard white porcelain, and the stalls are of average width, but the stainless steel toilet paper holder was a nice, original touch (right up there with the stainless steel holder at Strollo's, though I think I like that one just a touch better -- a bit more upscale and elegant and modest instead of purely functional, as is here). 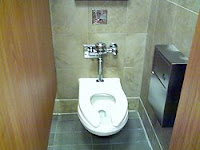 The walls here -- like the rest of the place -- have dark beige granite on them and the floors have an elegant soft blue tile on them. Combined, they make the place cool, relaxing and sleek -- this is a somewhat hip bathroom, after all, but not so hip that it loses its identity and wants to impart some sense of exclusivity, such as the toilets at Shari Sushi. Nor are they so chic that they feel like an HGTV project gone haywire -- like the bathrooms at the new Whole Foods in Orlando. 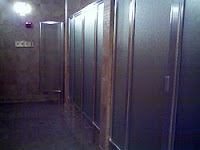 The showers are in the next section back: This is a long corridor filled with glass shower doors and shower stalls. The lighting is decidedly darker here, making the floor and walls appear darker than they are (and if I'm not mistaken, the soft blue floor tiles used elsewhere give way here to a more functional linoleum cover here, no doubt because of the moisture involved. As a result, the place feels somewhat cave-like, particularly a seaside cave (lots of echo here), but given what the room's used for, it's certain an appropriate feeling to have. 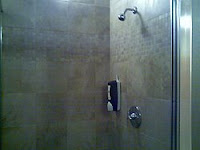 In addition to this, there are a few other nifty touches, most notably is the inclusion of a spigot water filter attached to the water fountains just outside the toilets. This spigots allow you to easily fill your plastic water bottle with filtered water instead of using the water fountain tap that has been used by everyone else.

If there's anything to fault here, it may be that the design makes me think that the place will look and feel a lot like Grand Central Station's toilets when they are at full speed. I understand that the place will be busy and should be (it's a gym) but at the same time, after experiencing a sweaty workout, I would like to know that there's a spot where I can wind down and recoup, and I'm not sure this is where that would be. 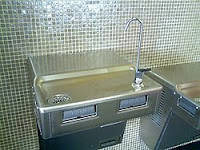 8. Very impressive in terms of design, offerings and technology available.

First of all, thanks for the sneak peek. We appreciate it. It's a fine toilet/locker room. Our only complaint is that we wish there was a place for some quiet downtime -- if that's coming or in the works, just let us know via our comments and we can re-evaluate. Thanks again.
at 15:36