Holy Scuffmarks! WhyNot Lounge Toilet Shows You Can't Ever Pee Too Close to a Urinal 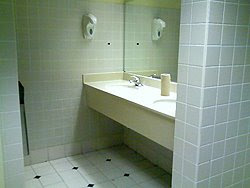 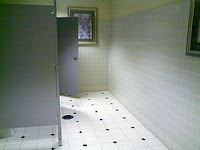 Despite the name, you won't find the toilet here in the lounge itself, rather it's just off the hotel lobby.

Exit the lounge, head towards the lobby and turn right down the first hallway you come to before entering the lobby proper. Go down that hallway and you'll come across the bathrooms, first the women's and then the men's. 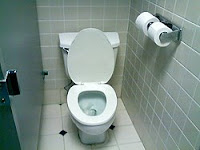 The WhyNot Lounge is the house lounge inside this Holiday Inn that's set across a very busy intersection in Orlando. The hotel itself isn't anything special -- typical Holiday Inn. The lounge has a bit of a local following however because it doubles as Bonkerz Comedy Club on certain nights, which is one of the few comedy clubs in the city, and offers a stage primarily to second tier comedians who make their living performing before smaller comedy audiences that exist outside the college and stadium circuits.

That's not to say the talent here is bad: Some of the performers here are very funny, they're just not household names or even "just below household names" in status. Michael Winslow (the guy who made the funny sounds in the Police Academy movies) recently performed, and his name was the only one I recognized among the performers who planned to appear there in the near future.

Of course, I don't watch as much Comedy Central as I used to, so perhaps this is a problem with my knowledge of comedians. 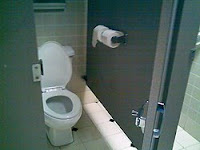 Anyway, the place itself is a touch on the grungy side but affable enough. Black walls, cocktail waitresses, decent enough bar food, well-priced drinks -- it's a good place for a group to come to and hang out, as it's a touch rowdy but at the same time aims for an element of class.

Once the comedy element is over, the place turns into a small bar/nightclub that caters to a wide variety of Orlando's unique characters, from elderly singles on the prowl to divorcees looking to get lucky to 30-somethings looking to dance the night away to the house band's tunes. Quite surreal in this regard. 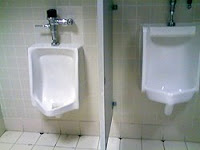 I suspect the toilets, had they belonged to the lounge itself, would be kind of grungy. But because they belong to the hotel, they are a lot more comfortable than expected.

Not that they are great, mind you. But certainly serviceable, if not a notch above that.

The design is simple. Everything is set along the left wall. The vanity, two sinks on a beige Corian (I think?) counter, stuck into a cubby area in the front. White soap dispensers stuck to the walls, which are covered in beige tiles from floor to ceiling. A roll of paper towels sits on the vanity counter because the dispenser, set behind the sinks with the trash can below it (single unit), was empty when I visited. 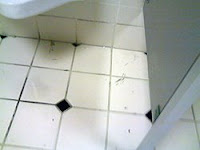 Outside the vanity cubby, you'll find two urinals and three stalls, all along the back wall and with gray metal dividers between them. Nothing flashy their either -- white porcelain urinal and commodes, with the stalls being a touch on the narrow side but nothing as narrow as, say, the stalls at Cafe Tu Tu Tango in Orlando.

The floor has a white tile pattern with blue highlights. Not a bad design. However, it was also scuffed and mildewed in spots primarily below the urinals. Not sure why, since where the scuff marks are happen to be are a bit too close to the urinal to allow for comfortable relief. As any guy will tell you, you have to give yourself a little room for the stream to propel. The scuff marks here are so close to the wall, it makes you wonder if the person responsible for them was peeing into the urinal from behind the unit itself. Really, this is the strangest sighting of scuff marks I've seen since my visit to the Aloma Cinema Grill in Winter Park, which had them on the outside of the toilet bowl. 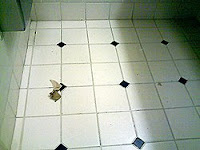 Also, there was a good amount of paper towel pieces on the floor, which I also found a bit odd, since the only towels there were on the roll on the vanity. A little here and there is okay, I guess. We've seen lots of mis-thrown paper towels around garbage cans, for example, and toilet paper in the stalls and such, but rarely do we see it in other places, and rarely do you see them this far away from the source.

Smell-wise, the place was fine, with nary a tinge of urine. Lighting-wise, it could be a bit brighter in here. I would expect a toilet directly attached to the lounge to be dim, but not the hotel's toilet, you know?

6. Decent enough though it could use some serious touching up.

Like the Aloma Cinema Grill in Winter Park, the place looks nice on the surface at first but, upon closer inspection, needs a bit of sprucing up. Namely, get rid of those insinuating scuff marks and police the place a little better to ensure there's no trash on the floor.
at 14:13