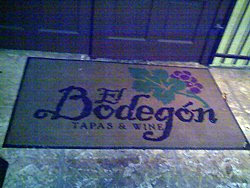 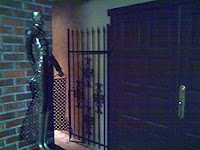 From the front entrance, take an immediate left after passing the hostess stand and head down the side dining hall towards the back wall. The toilets are located in the small enclave there.

Note: This is a dark place, so give your eyes some time to adjust before moving on (unless you're in an emergency situation, of course). 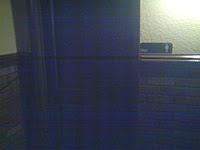 This classy tapas bar on the outskirts of Winter Park (a somewhat posh -- at least seemingly so -- suburb of Orlando) offers some of the most authentic takes of Spanish cuisine available in the city -- which is somewhat surprising, considering the number of Latino restaurants in the area.

The menu here splits itself between 20 or so tapas (or small plates) and 20 or so full-sized entrees. I didn't try the entrees on my visit but the selection seemed promising and included everything from chicken to meat to fish, as well as traditional Spanish fare like paella. 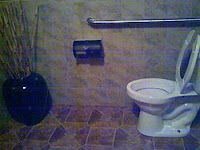 The tapas (which I did sample) offered a wide range of ingredients, from crab-stuffed pequillo peppers to shrimp sauteed in a broth spiced with cilantro, oil, garlic and wine to mussels stewed in a lively mix of tomatoes, garlic, and wine. I didn't see much in terms of fresh sardines or orange-flavored sauces (both Spanish staples I expected to see on the menu -- though the crema catalana dessert had a nice infusion of orange in it), or much with grilled meats or veggies, but what there was certainly satisfied. 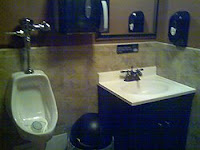 The wine selection is solid, though the sherry assortment was a bit lacking -- five were listed on the menu but only two of those were available both had turned in the bottle before they had reached my glass. Thankfully, our friendly server corrected the problem by offering two glasses of house sangria, for which we were most grateful.

Prices are a bit high, but there are deals to be head. Especially on Sundays, when the place offers an all-you-can-eat tapas and wine menu for $30. Considering the quality of the food we received, it is worth the cost of admission. 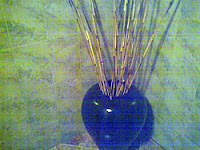 The restaurant's interior is dark (as stated earlier) and rustic, more intimating an elegant Spanish villa table setting than actually re-creating it. There are two sections to the dining room and a small bar area, and each section is filled with dark woods and deep orange hues that seem taken from the Godfather movies.

All of this, combined, creates an elegant feel to the place that's more Old World and comfortable than stuffy and slick, however the menu, service and vibe carry a sophisticated feel making the place perfect for a high-end evening of hanging out or a special dinner. 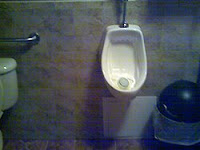 The toilets exude the same charm as the dining room. These are one-baggers of high caliber, on par with what we found at Strollo's Cucina Due, Pizoodles in Vero Beach, Tacos El Rancho, Hershey's Ice Cream Vista Lakes and American Signature Furniture South Orlando. (Though, it should be said that these one-baggers fail to reach the marks set by the wonderful Sensi or Okada in Las Vegas.)

The decor here is elegant yet simple. Rust-patterned tile on the walls, brick-patterned tile on the floor and brown paint on the upper walls. A white commode in the back corner, sitting opposite a black glass vase holding some dried bamboo-like stick. Black-framed pictures of wine bottles (the kind of art you'd find at most trendy print stores, really -- or at American Signature Furniture) hang on the walls. 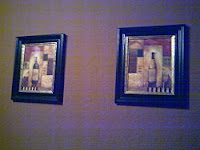 A white urinal set up next to a white sink set into the corner of the place. A soap dispenser hangs to the right of the sink, a paper towel dispenser to the left (dividing the sink and the urinal, essentially).

It's a cozy environment, stylish, dimly lit -- almost like a more dimly lit version of the toilets at Strollo's Cucina Due, minus the stainless fixtures. It has that same cozy, elegant feel. It's also very clean and odor-free. 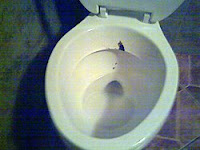 My one setback is that the toilet has a noticeable streakmark inside it, set dead center on the bowl rim. In most cases, I don't care about such things, and in multi-user toilets the situation is somewhat expected (as in our visit to the Oxford Train Station toilet), but here, with limited options, it's a bit off-putting to find such a thing waiting for you for your visit.

8. A fine toilet through and through, marred only by that excessive streak mark.

A little more policing of the toilet would eliminate any streak issues, and I hate to say that until the issue is under control, you may need to adopt such a policy.
at 15:49