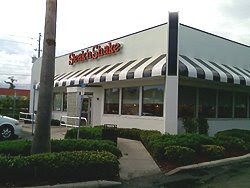 From the front entrance, and with your back to the door, head through the dining room to the back left corner of the place. There's a small hallway there leading to the bathrooms. 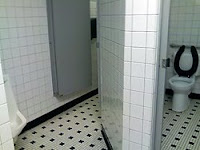 This Illinois-based chain is yet another of those eateries that offer a throwback to 50s-era dining, reminding people that in the 50s all people ate were burgers, fries and like-minded diner food, right? The restaurants are designed to look like old-fashioned malt and burger shops of that time, complete with interior designs based on the black and white checkerboard patterns that were popular then and employee uniforms based in starched white shirts and paper grill-cook hats.

Of course, it's also a fast food restaurant, only that here you experience full-blown table service instead of ordinary counter service. The offerings are the same essentially, though -- burgers, fries, chili, milkshakes. There are also soups, some chili mac dishes and some desserts and some salads, but nothing too mind blowing or adventurous. (Big Boy Diner, which has a similar design and menu, offers miles and away more variety on its menu -- and better food, in my opinion). 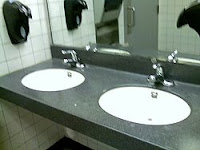 The burgers here are decent and because of its 24-hour schedule it offers a better option for middle of the night munchies than Denny's. Though I won't say that the burgers are better than what I can get at the Fillin' Station or Fuddruckers, or even Whole Foods (if we're talking Orlando) -- or even Jack in the Box, if we're talking elsewhere, since Steak n Shake's food kind of falls into the category of the latter. But it's not bad and well-priced, provided you go light on the mustard (if not, the burgers become too tangy).

The bathrooms are what you'd expect from your typical fast food joint. The walls are covered in white tile (similar, though not as gleaming white, as the tiles found on the walls at the IKEA Orlando bathrooms) and the floors are covered in a small white and black pattern that was similar to what we found in the bathrooms at Theo's Kitchen, only with a greater emphasis on pattern and much less grime, and the WhyNot Lounge, only this place has smaller tiles on the floor than that one. 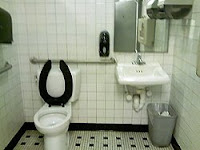 The bathroom itself has an odd shape -- rectangular, but with angular lines and tight corners created by some non-traditionally set up toilet stalls. There are two stalls here, one handicap and one regular, and the handicap has a fat back end and thin opening, which in turn jets out into the common area like the top part of a pentagon and thus creates a hard angle in front of the room's lone urinal, which hangs midway through the entrance to the handicap stall and regular stall. 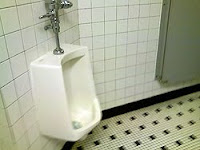 As a result, the passageway around the urinal to the regular stall becomes pretty tight -- and even tighter still if someone's at the urinal and you want to get by to hit the regular stall, which is tucked away into the deep, back corner of the room, down this narrow entrance way. Not exactly convenient, if you think about it, but because the stalls are made of wall and tile, there isn't much flexibility to how one can shift the design any.

Granted, the handicap toilet is pretty roomy, whereas the regular toilet is a bit skimpy, but both are perfectly serviceable. They house white commodes with black seats, and the regular toilet had some fiercely blue water in it, making me wonder if it'd been used at all that day (I arrived for dinner, so there was no doubt that others had visited the toilet before me) or just skipped it because it was too hard to get to. The sink is in the very front of the place -- a two-station unit with white sinks set inside a gray Formica counter. Standard pull-up faucets, with soap dispensers hanging to each side and a large mirror behind it. Pretty Teutonic and straightforward -- like the rest of the place, which reminded me a lot of the Chick Fil-A I visited in Raleigh, only that was a little cleaner and lacked the crazy angles in its design and was overall more functional for more multiple users.

6. Teutonic and clean but not quite up to speed of others in this category.

The angular shape of the toilet stalls are definitely unique but not as user friendly as you'd hope them to be. Though, as stated earlier, not sure what can be done about that. Otherwise, the place could use a good scrubbing with bleach and perhaps some brighter lighting. And please flush that blue stuff away from the regular toilet -- I haven't been that distracted by the color blue in a bathroom since my visits to Teremok in St. Petersburg, Russia and the Abbey in Deland.
at 15:15