In the Right Light, Texas de Brazil Toilet Feels Much Like the Most Elegant Medieval Prison on Earth 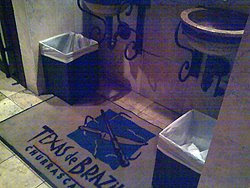 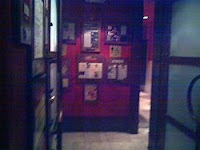 From the front entrance, face the large hostess stand that looks more like an elongated cashier counter than a hostess stand. Behind the hostess stand, you'll see a divider wall, which separates the small lobby from the salad bar area behind it.

Follow the divider wall to the right and you'll see a hallway opening across from the right edge of the wall. The bathrooms are down that hallway, which is covered with newspaper and magazine clippings showering the establishment with praise. 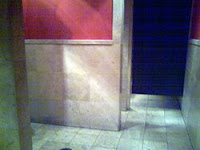 This meat-lover's haven is one of Orlando's more indulgent and elegant eateries. Essentially an all-you-can-eat meat and salad place, it models itself off the churrascarias of Brazil: The menu consists of 14 to 17 grilled cuts of meats, chicken or pork, each prepared method over an open flame and carved tableside by the restaurant’s authentically costumed Gauchos. The meats are salty and tender and full of flavor, making the location a must for anyone who loves beef as a whole.

Also worth noting is the place's enormous (more than 40 items) salad bar, which includes everything from imported cheeses to salamis to freshly made noodles to soups -- in addition to the multitude of greens available! 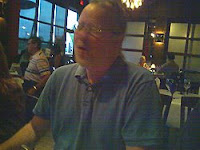 Though on the surface it sounds like a better-than-average buffet, in actuality it's a fine dining restaurant of the highest caliber. The ingredients are fresh and expertly prepared (especially on the salad bar, which is easily the best of its kind in the city), service is outstanding, the wine list is impeccable and the desserts are fantastic.

Of course, it's also somewhat expensive (expect to drop $150 for two here) and it's unfathomly filling -- just look at the face of my friend Kip McGuire in the picture to the right for proof. The man looks ready to explode from eating too much meat! (That's essentially how you'll feel after leaving this place.) 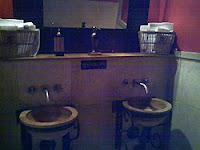 Given that setup, you expect the bathroom to be somewhat horrendous. Bathrooms at all-you-can-eat places tend to be locations where people make room -- one way or another -- for more food, or for the chance to make their pants fit more comfortably, so they aren't always the prettiest places (as indicated by, say, the toilet experienced at Super Orient Buffet in Orlando).

But now and then we come across a fine buffet bathroom (the one at Paula Deen's The Lady and Sons in Savannah, GA comes to mind) and this one is another. Essentially a small, long place, it's filled with several modern touches that life it above the ranks of run-of-the-mill toilet. A bit over-crammed with design touches, it's still a top-notched rest stop and definitely a comforting destination after you've filled yourself with 50 lbs. of meat. 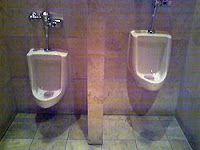 The floor here is covered with off-white rough-textured (as opposed to smooth and sheer), and the walls are covered in a dusty, sandstone like tile. The lighting is dim but elegant (better than what we found at, say, Soyka's in Miami, which was a bit too dim).

The sink bowls are made of heavy granite, and there are two of them, each sitting like statues into a little cutaway in the front of the bathroom. A nice touch.

The sink station also has two waste baskets, one to each side of each sink bowl -- a smart inclusion that eliminates that awkward moment where two people find themselves trying to throw paper towels away at the same time.

Also, there is some rust-colored steel soap dispensers above each station, on a nifty little jetty shelf that sticks out just below the mirror on the wall above, as well as two wicker baskets holding some "seriously thick hand towels," as my friend Jason Wilson remarked. 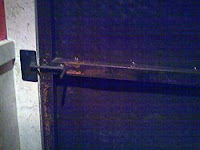 The urinals and toilet are the standard white porcelain variety but are clean and in perfect working order. The urinals are separated by a dividing wall of those dusty sandstone-like tiles, as are the two commode stalls.

The doors to the toilets look like they're made of wrought iron and both latch closed with one of those primitive latches that one sees in those old movies where people are locked in a dungeon. And ironically, the effect inside the stall is similar to the experience of being in one of those dungeons, or in this case I am thinking more of a cell on a Spanish galleon, given the modernist Latin flair found in the design of the restaurant itself . You close the door behind you and the hinges creek like a piece of antiquity, and you lock the thing and the lock shudders and the echo of the locking sound resonates throughout the bathroom. And the latch itself is even rusty! Very prison-like, if you think about it. 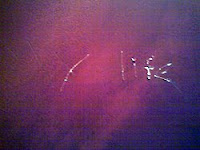 Worse still was the bit of graffiti I found inside the bathroom wall, reading "Life." Indeed, very prison-like. Then again, if you're there for a longer visit, perhaps the illusion of "life" allows for a more contemplative or redemptive experience?

8. Elegant, stylish, old-fashioned -- if only the stalls didn't have that prison-like feel to them.

I think it's time to oil the hinges on the bathroom stall doors. Otherwise, great place.
at 15:20