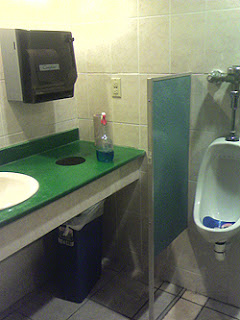 From the front entrance, head to the back wall of place, staying to the right of the buffet tables. You’ll see a small doorway there (a little hard to spot amid the continuous stretch of wood paneling covering the walls, mind you, but not impossible) to the right of the double doors leading to the kitchen -- the bathrooms are there.

Though still popular with people from the neighborhood (and those willing to venture a few miles north of the airport to get something to eat that isn't chain-restaurant based), this once decent locals buffet now stands as one of the city's lesser Oriental eateries, with a wide, all-you-can-eat menu of flatly fried foods, off-tasting noodle and rice dishes and an assortment of other sketchy items that probably should be left at bay on your go-arounds. (Granted, I was in the minority on this -- most of the people there, and there were many -- were having four or five plates' worth of the stuff, but I could barely stomach one.)

A former pizza hut, the interior, as previously stated, consists primarily of medium-toned wood paneling and a sharp, bright lighting that accentuates the drab carpeting and steam rising from the many chafing dishes, as well as the spaciousness surrounding the buffet itself. 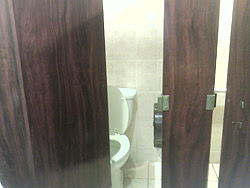 The toilets extend the tackiness to a degree, although they are more crammed, weathered, darkened and soiled than expected. (Clearly the restaurant's interior has received a face lift in the last five years, but the bathroom looks like it hadn't been touched up in years.) My visit also featured a run-in with a local who spent more than 5 minutes combing his hair (he was nearly bald, it should be stated) at the bathroom's lone sink. In fact, I had to stand behind him a few minutes and clear my throat several times before he got the hint that someone was waiting to use the sink. (I guess he didn't see me staring back at him in the mirror?)

If that weren't odd enough, the sink and floor was covered with standing water and paper towels -- it was as if someone had started to clean the place but had given up on the task because it seemed too arduous. (Either that or my combing friend had more to hide than a receding hairline.) 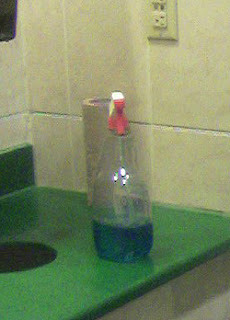 Stranger yet, a lone bottle of Windex sat atop the vanity here, looking like a guard that no longer had any idea what it was protecting. An more than apt metaphor for this loo, I'm sorry to say.

4. Serious work needed to improve the facilities here, metaphor or not.

Someone stopped caring here, it seems. Time to bring the passion for your business back, I say. Or, at least give that lone Windex bottle a friend -- he looks lonely, all there by himself, and that only adds to his overall ineffectiveness.
at 15:20