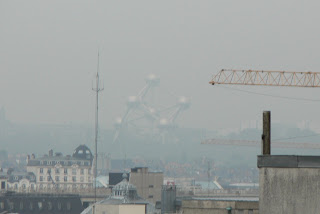 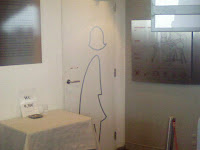 You need to pay for entry at the ticket office next to the Atomium. Enter the complex and take the lift to the top. You’ll exit the lift in to the restaurant. You are forced left. Follow all the way around and just before you meet the lift again you’ll see the toilet to the left. 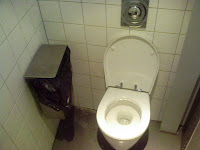 Despite their ability to make extraordinary beer, the people of Belgium are an odd sort. I guess being squashed between France, Germany and Holland as they are does that to you. This amiable oddness shows itself in fairly harmless ways it must be said, like their love for the Atomium. This structure can be seen clearly over the Brussels skyline. But why on earth I hear you say build a building in the shape of an Atom? Well I’ll let you get the answer to that question, but at least they included a toilet at the very top!

This is one of the oddest buildings I’ve gone looking for a toilet in. And the first thing to note is that I think the top floor only has a ladies'. Well at least that's what the front door seems to signify. OK lets say it's probably unisex. Well, at least 3 men had used it before I did, and I thought it was worth the risk in the name of toilet journalism! 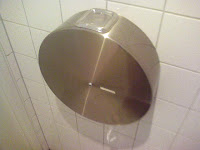 So what did I find? Well these are not the most luxurious toilets in the world, and they could do with a little more capacity. Nevertheless, when you consider they are in a relatively small ball hanging above the city, they are plenty big enough. They were also fairly clean. Add to this an automatic flush and plenty of hot water in the tap and they were functional enough. Nice shiny fittings that are more than in with keeping with the space age exterior of the building. Overall, I’d have to say I was impressed.

Now we have to consider which atom the building represents. Wii2O? 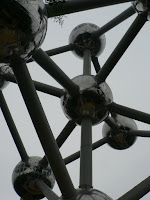 Maybe you could clarify for the international visitor if this is a unisex toilet?