Toilet at New Orlando Whole Foods: Is this a Super Market or an HGTV Case Study? 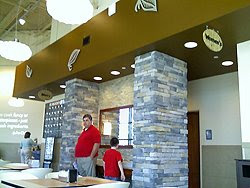 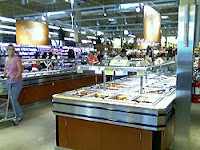 From the front entrance, head to the store's cafe seating area (which doesn't serve food but offers a sitting area for people who've bought food from the store's hot bar or grill and want to sit and eat it then and there instead of waiting to get home).

Once there, you'll see a sink area surrounded by two gray brick columns. The toilets are to either side of those columns: Men's room behind the left column (when facing the sink area between the columns) and the women's room is behind the right column. 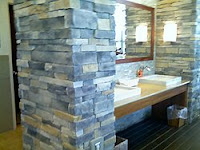 This mammoth high-end grocery chain has been offering gourmet food fans a place to buy top produce and other high-quality and hard-to-find items for two decades now. This one merely ups the ante on the business model, offering an extensive meat counter and prepared food area, including a pizza baking area, hot bars featuring everything from middle eastern stews to BBQ and mammoth fresh meats section where you can tell the guy behind the counter how you want your burger cooked. 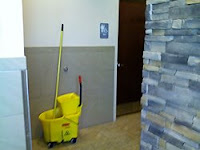 The food on the whole isn't bad but it is also not as great as it sounds or even smells, particularly the ethnic concoctions, which often taste bland or overly Americanized. The vindaloo pork they had on one visit looked luscious and creamy but lacked the character or vinegary bite you would expect. Similarly, the arroz con pollo they had on the line was serviceable but lacking the the home-cooking character you'd get from one of the city's better Latino restaurants. 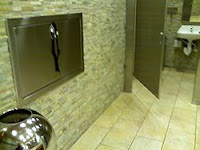 On the plus side, all food is priced by the pound, so if you want to try just a spoon of the chickpea stew or the roasted eggplant rollitini, for example, it's a fine place to pick just a bit of it up, clump it together buffet style in a container and pay about $10 for the whole thing. Which isn't bad these days for lunch or even dinner.

A better option is the grill area. For about $6 (a good deal, burger-wise), you can have a freshly ground patty grilled to order. The patty is huge (usually 8 - 10 oz) and grilled decently enough (though my medium came out surprisingly rarer than I would have liked). Not the best burger I've had in town (that honor at the moment is split between the Fillin' Station and Fuddruckers, though my most recent visit to the former was disappointing) but not far off, especially considering the quality and variety (you can get buffalo, cowboy burgers, etc.). 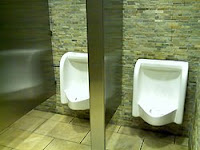 The store itself is stylish and multi-zoned, with the cheese, bakery and wine areas lit a little more dimly to (so I'm guessing) increase their sense of classiness and produce and food aisles are well lit to accentuate the freshness of the items on their shelves. Shrewd design but effective.

Bottom line: It's a fun place to shop, especially if you like food and know what to do with all the unique ingredients (organic millet seed, for example?). Though it's a hard place if you're hungry, because the place is filled with temptations (and a decent gelato bar).

As for the bathrooms: It's also very stylish, so much so that when I stepped in I felt like I was watching one of those HGTV shows on how to stylishly rebuild your bathroom. It's attractive, slick, hip, functional -- everything that channel seems to support, idealistically.

In addition to the gray brick columns outside, which also make up the walls here, you'll find lots of shiny stainless steel (the lone toilet stall's dividers are made of it, as is the urinal dividers, the fold-down baby changing counter and the toilet paper and towel fixtures) and a beige tile floor. 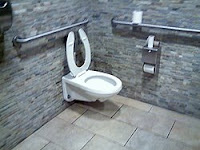 Generally speaking, the design itself looks a lot like the restaurant design at Sensi in Vegas, except that that place had more flowing water over its brick facades. (The bathroom here has no similarities with Sensi's bathroom, however, it should be noted.)

The high point here is the vanity, which contains a counter made of polished wood and is set before a stretch mirror. It has two sink stations, each made of single pieces of granite and shaped as shallow, rectangular fountains with free-flowing drains. Chrome faucets (automatic) and automatic soap dispensers stick out from the gray brick behind them and hang over the sinks, creating an elegant modernist fountain effect that truly is one of the classiest sink experiences I've had since visiting the bathrooms at Wynn Las Vegas. Not quite as overwhelmingly elegant as that, but not far off. 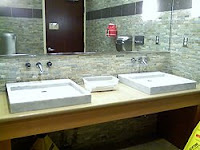 One hitch with the sinks, however, is that they are long and you have to stretch a little bit more than you'd like to reach the water flow. So those who are height challenged may have a bit of trouble with them. (Thankfully, the lone stall doubles as a handicap stall and has a more manageable sink -- standard white porcelain -- there. But then you'll have to wait to use it if someone's in there.)

The toilet is white porcelain, as is the urinal, though the urinals (it should be mentioned) are those new environmentally safe no flush models, like what we found in Nona Sushi. 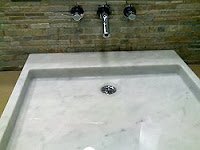 It's a clean environment for the most part, though they're also busy (making it a touch place to enjoy some peace and quiet) and sometimes they're not well policed.

My first visit here revealed a place filled with water and the stench of urine, as well as a toilet stall that was covered in paper and pee and was borderline unusable. My second visit revealed the place as clean and perfect and hip as should be, spotless, friendly and stylish. Of all the gourmet market bathrooms I've visited (which includes Laurenzo's in North Miami Beach, Harris Teeter Raleigh and Fresh Market Orlando, this is by far the best of the lot.

The store itself has only been open a couple of months and is still very obviously working out some operational kinks (on both my visits, I found outdated dairy still on the shelves, for example), so I'm actually willing to forgo the memory of that first visit for the second, for now. Will keep you updated on the progress in the future -- if it continues to slip, it will be noted, believe me.

8. Clean, stylish and fun to visit.

Assuming you'll get the cleaning schedule under control, I would say the next step is to make it it a touch more personable. A few decorations or posting showing upcoming store events would be a good start.
at 14:34

Haha great post! This is the first time I've been to your blog and I thought it was great! Its nice learning about the different facilities around Orlando and know where and where not to go. Thanks for the info! I look forward to reading more.

Would you mind contacting us? We are the architectural firm that designed the inside of the Orlando store. Please contact Barron Schimberg at 941.894.6888 or email at barron@tsg-fl.com. Thank you.