Stratosphere Toilet May Be Highest Bathroom in Vegas, But It Offers Little In Terms of Spectacle 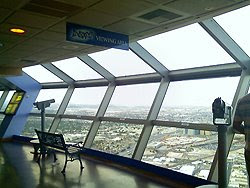 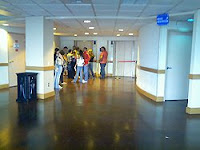 Getting to this toilet here requires going on quite a journey. First, you have to park your car and head to the central elevators inside the casino -- all while avoiding the many distractions found there (difficult, considering the hotel's reputation for loose slots on the Strip).

Then, you have to go to a ticket booth and purchase admission tickets to the hotel's observation deck, which is 1,149 feet above the street below -- the highest observation tower west of the Mississippi, states the stats on this landmark. (The observation deck also plays host to three thrill rides, which take you even further high up and test the rider's guts when it comes to dropping that distance.... if you know what I mean. Of course, in the ads and video I saw of the rides, they really didn't look too intense. But once you're up there and get a better perspective of what's going on, you can see why they are described as being frightening thrill rides -- you feel the height of the building every step of the way.) After buying admission tickets ($13 per person as of this writing), you have to make your way to the super-fast elevators that take you to the top. This sounds easy but really isn't, since the path to the elevators requires that you walk through a very tacky (and very expansive) shopping mall filled with just about every tacky (did I say tacky?) Vegas souvenir you can think of -- and just about every kind of foul smelling fast food vendor imaginable. The walk through the mall takes a good 20 minutes if you're going at a good pace. 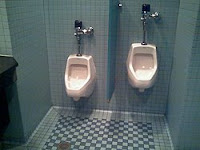 When you finally reach the super-fast elevators, you have to pass through a security checkpoint and then wait for an elevator to arrive. The trip to the top takes only 30 seconds (our elevator operator said the lift system is the fasted in the world) -- so fast that your ears pop several times on the trip because of the change in air pressure.

Once at the top, you'll enter a 360 degree observation deck which houses a number of pay-to-use binocular devises, some displays and posters showing what you can look at in the distance, several benches, a fast food counter (with hot dogs, pretzels and such), a Starbucks (the highest one in the world, I was told) and lots of windows for sightseeing. 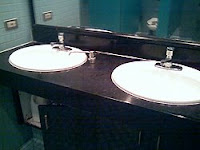 The bathrooms are located at opposite ends of this conundrum. The women's is located pretty close to the exit area for the incoming lifts -- you'll see a sign for them almost immediately after arriving.

The men's is harder to find, as you have to walk around to the other side of observation desk and look for the entrance to the down elevators. From there, you have to look a little harder, since the sign for them isn't quite as noticeable and large as the women's.

From the main roundabout pathway, face the entrance queue to the downward elevator and look to your right, for a small hallway about 10 feet in from the path. Down that hallway is a door leading to the men's bathroom. 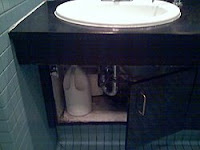 With all that set-up, and the view you receive, you kind of expect the bathrooms here to be somewhat spectacular -- and they are not. This is a small restroom, about the size of a typical fast food establishment's facility, and about as impressive, and nothing more.

While that isn't terrible, it is also disappointing. These are the highest toilets in Las Vegas, located in the highest observation tower west of the Mississippi. Could they at least play up to its surroundings, like the bathroom at the Signature Room at the 95th in Chicago (slide 5 in this slideshow, if you're interested)? 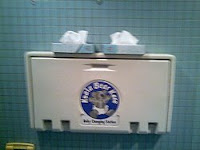 As is, these are pretty run of the mill, boring, bland and in need of some touching up. It's a compact place and somewhat tight-fitting (much more than expected), with two stalls set against the back wall, two urinals set to the left of the stalls and a two-sink vanity station opposite the stalls. Two paper towel dispensers hand on the wall opposite the urinals.

The walls here are painted green, and the floor features a small and black interchange pattern on it, made up of small tiles -- similar to what we found on the floor at Steak n Shake Winter Park, only with a few more framing tiles used here. 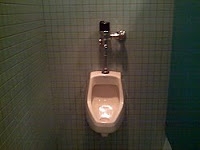 There are two toilet stalls here, one handicap and one regular, both with white porcelain units. The handicap is pretty roomy but the regular stall is a bit tight-fitting -- just like the set up at Steak n Shake Winter Park. The two urinals, set next to one another at the front of the room with a privacy barrier between them, are also white porcelain. the toilets seemed in working order but there was some scum buildup on the grout and sealers -- though nothing horrendous.

The vanity, to the left of the urinals, features a two-sink station, both white porcelain, set in a black fiberboard counter and a badly chipped mirror hanging overhead. There is a supply cabinet under the sink vanity where the cleaning supplies are kept -- one of the doors to that cabinet was missing and you could see the supplies clearly. (Reminiscent of the bathroom at Country Ham 'n' Eggs, only without the homespun decor.) 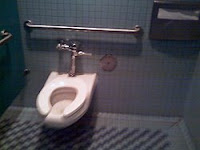 The faucets here are of the push-button variety, like what we saw at IKEA Orlando, only these stayed on a little longer than those. There were also counter-fixed soap dispensers and a power outlet to the left side -- I guess in case you want to have a shave at the highest bathroom west of the Mississippi?

Also worth pointing out is that there is a baby changing area (about as basic and bare bones as the one found in our recent trip to Babys R Us in Orlando) -- so if you want to change your baby in the tallest observation tower west of the Mississippi, you'll have a chance to do so here. Why there are two boxes of tissues atop the baby changing area is a mystery to me. 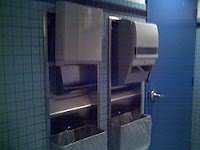 And finally, there are the paper towel dispensers -- two of them, different models completely, with neither one fitting the decor of the bathroom much and one being automatic and one manual. The automatic one wasn't working. The manual worked but was fixed strangely in the wall -- as if it'd been knocked down from its wall inlet, fixed up again, and then re-fixed in a way that kept it up there for the time being. Pretty shoddy, to be honest.

Cleanliness-wise: Not bad. As said, some grime here and there. Odor-wise: Not too bad, but it did feel a bit dank in here. 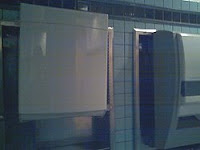 4. Normally a 5, but dropped a notch because of the disappointment I felt after entering. Should have more WOW considering its location.

NEEDS MORE WOW! And a good scrubbing, and some minor repairs to fix the many anomalies. But more importantly -- it needs more WOW!
at 15:31