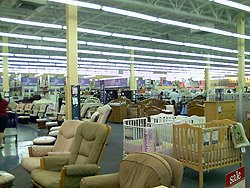 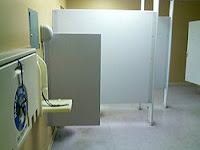 This is an enormous warehouse store filled with shelves of merchandise and long-stretching displays. Also on hand are back-of-the-store facilities catering to new mothers, such as baby-changing rooms and nursing room.

Lucky for us, the changing and nursing rooms are located in the same area as the toilets. Just head to the far back left corner of the warehouse and you'll spot the toilets. They're down a purple hallway that has some vending machines at its start. 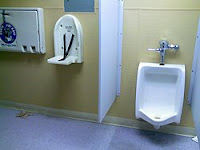 Not sure why there are vending machines there -- perhaps the employee break room is nearby? Or perhaps the majority of people passing here are hungry from the long trek it takes to get here? Or perhaps the place caters to a large subculture of people who like to eat chips and pretzels the minute the finish doing their business or feeding or changing their babies? 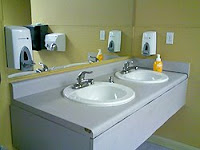 The sales floor to this mammoth warehouse isn't anything flashy, but it doesn't feel especially cheap either. Rather, it's a run-of-the-mill retail space, filled with easily collapsing shelves, broad floor displays and little enclaves here and there. Think of Best Buy, only with nothing but baby furniture, clothes, food and such.

I can't complain on the size of the place, because I expected the store to be overrun with babies and their crying (clearly, as you can tell, I'm not a parent), but the size of the joint allow someone without a baby (like myself, who was there as part of a group with a baby) break away from the ogling and cooing and actually have some non-baby-minded time for myself. 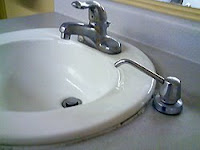 Note: If you find yourself in a similar situations, may I suggest settling into one of those nursing rockers for a spell. Man, they are comfortable and soothing!

Anyway, at one point, the baby in my group needed feeding and changing and the mother and baby and everyone else rumbled to the back of the store to help with the proceedings. We asked a clerk where the baby stations where and she told us (which is how we found the toilets) and we slipped back into the purple hallway and let the mother and father take care of the baby (change her first, then feed her) in this closet-like room that reminded me more of those set of computer cubicle stations you see in airports for traveling businessmen than baby changing stations, but anyway..... 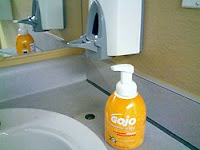 While there, I decided it was a prime opportunity to visit the toilets, figuring they would have to be pretty tip top because the place catered to babies and babies always needed clean, sturdy environments around them to avoid sickness and such. Also, given that most baby stores (like make-up stores or hair supply stores) are women-based, I figured the men's room would be a hidden treasure.

Well, imagine my surprise when I stumbled into this poorly pieced together ramshackle of a bathroom. Clearly, this may be the finest example of a cheaply put together toilet I've ever seen. I think there is more money put into my last meal at Taco Bell than what's put into the materials and construction composing this spot. 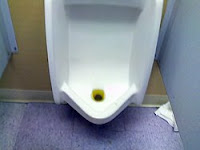 The walls here are painted yellow drywall, not tile, and the floor is gray linoleum -- not even that crappy gray tile we've seen at so many places (such as the New York Toilets at Universal Studios). Not that I have anything against painted walls and linoleum (World Market Orlando is like that and is a perfectly serviceable toilet), but the paint job here looked like it'd been done in a matter of minutes (lots of places had bleed over streaks) and the floor looks like it was laid out without looking for air pockets or tight seals to the walls. Just shoddy. 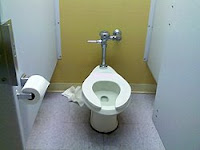 That shoddiness extends to just about every other facet of the bathroom. The two-sink vanity features lots of cracks in the sealant, a non-working soap dispenser (sitting next to an empty bottle of hand soap, no less), cheap fiberboard counters and a mirror that looked like it was being held to the wall by only one or two nails.

In fact, everything on the walls in the bathroom looked like it was ready to fall down, from the flimsy looking handicap supports in the back stall to the very unsturdy-looking fold-down baby changing tables at the front of the room (and why would you use that when the official baby-changing stations are right down the hall?) to the paper towel dispensers, that looks like they might fall from the wall the instant you depressed the crank. The whole place looks and feels like a cheap college apartment's kitchen, if you think about it. 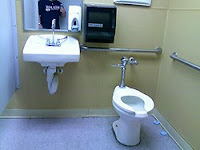 The white porcelain urinals and toilets (one urinal and two stalls, with the back one being the handicap) were your standard set. Clean, but also somewhat worn down. The stall dividers were white but the one to the left of the urinal was a bit wobbly when touched. The urinal was un-flushed when I found it and filled with pee, which lent a slight aroma to the air.

The stalls themselves were dirty. The smaller one had a huge mound of toilet paper stashed behind it for some reason -- either a leak or some small child having too much fun or some sort of evidence-hiding thingamajig. 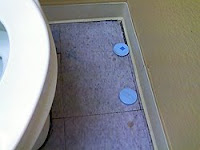 The larger one had a very sterile feel to it and had an air freshener tab, broken into two pieces, sitting on the floor to the side of the toilet. While it wasn't too smelly in here, I wonder what sort of force it took to drop that tab to the ground and have it fall apart like that -- and from the looks of it, it looked like it'd been there a long time.

At the front of the bathroom, by the entrance, is a purple door (the purple was close to the same color of purple I found at the wonderful London Eye ticket office toilets, coincidentally speaking) with a key code lock on it and a sign above reading "Associates Only." I'm thinking that's a storage closet, but upon further reflection I wonder (given the vending machines nearby) if it might also be an entrance into the employee break room. Given the cheap construction of the bathroom, I wouldn't be surprised it the supply room and break room were one in the same. 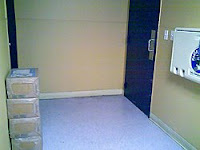 On the floor, to the left of the "Associates Only" door was a stack of four boxes, each wrapped in plastic. On most days, I would say that these were simply items that needed to be put into the storage closet there (we witnessed a similar sight at the horrid CVS toilets just outside of Savannah, GA). But again, given the place's shoddy construction, I wouldn't be surprised if I found out the boxes there were actually responsible for holding up the wall. 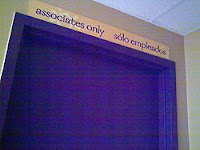 3. Sure, it's somewhat clean and quiet, but it feels so cheap that you think the whole place will fall down upon you the minute you sit on the toilet.

How about including some quality ingredients here? Or at least giving your decorator a chance to look over the place and make some necessary add-ons so it doesn't look as cheap. I've seen wet cardboard boxes with more structural integrity!
at 17:11

wow...finding a baby changing station in washrooms and restrooms is such a relax for the mothers who are out with the babies.