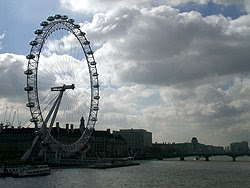 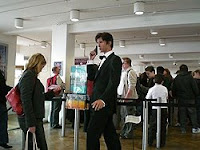 No, the bathrooms here aren't on the Millennium Wheel itself -- though that would be impressive. Instead, they are in the ticket office located across the plaza from the entrance line to the tourist attraction.

To find them, head into the ticket office. About 50 feet down, you'll see the ticket counters, with tellers and such, as well as a wax figure of James Bond (looking like James Bond, not like one of the actors who played him in the movies) brandishing a gun and sort of guarding the start of the queue (not really sure why). 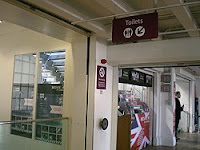 At that point, turn right and head down a hallway another 50 feet. You'll pass a cafeteria/cafe on your right. A stairway leading downward will open on your left, with a sign above it saying the toilets are down that way.

Go down. At the bottom, turn right and the toilets will be on your left, first the men's and then, a little further down, the ladies'. Just look for the bright yellow entrance doors. 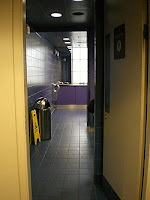 The London Eye attraction itself is a wholeheartedly entertaining experience, in which you take a 30-minute ride on one of the world's largest Ferris wheels and get to see some supreme views of London (provided the weather is accommodating). The ride isn't fast -- it's a casual trip and so you get absorbed in the ever-changing view that you sometimes even forget your moving.

The ticket office itself isn't much of a draw, outside of that wax figure of James Bond and other bits of cheeky decor here and there. The toilets, however, are very hip, perhaps some of the hippest I've ever seen. 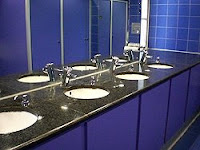 The place is covered in purple tiles, from gleaming purple tiles on the floor and walls to sheer purple paneling behind the row of urinals found on the front wall to purple dividers separating the toilet stalls along the back wall. In between the urinals and toilets, taking up the middle of the place, is a vanity area holding about four sinks per side (one side faces the urinals, the other the stalls). The vanity has a black marble top, automatic chrome faucets and pump soap dispensers. 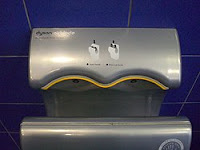 The highlight of the bathroom here is the hand drier, which is made by vacuum giant Dyson. While traditional driers have you push a button and then blow air down upon your damp hands, the ones here have you place your hands inside cylindrical chambers (one for each hand) and then ask you to pull your hands out slowly, during which the water is sucked off your hands via a powerful vacuum.

Not only was it the most effective hand drier I've ever experienced (hands were spot dry) but also it was the most enjoyable. I actually liked the experience so much I went back and washed my hands again, just to repeat the fun. (Yes, I'm unique like that.) 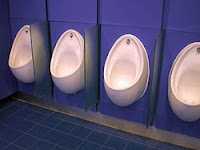 Cleanliness-wise: It was a pretty clean place. I saw some spilled water on the floor and on the vanity (clearly, the hand drier technology had not been implemented into other areas of the bathroom -- how's that for an idea!), and some bits of mis-thrown trash, but seeing that the London Eye had lots of visitors that day, as did the bathroom, I didn't see this as much of a setback. Tourist attraction bathrooms do get busy, after all. Despite this, the place was still pretty clean, so you get the idea that it's probably immaculate on a slow day. (Plus, the purple tile makes it hard to spot any mildew or other grime, if there is any.)

Smell-wise: Like the toilets I experienced at Westminster Abbey and the Tower of London, the smell of urine was somewhat sharp here. (The Tower of London toilets seemed to be the best about covering up this quality.) Again, nothing as excruciating as what I found at, say, Pulkovo International Airport, but it was definitely noticeable.

8. Even with the urine stink, it's one cool bathroom to visit. And the hand drier here may just be the best add-on I've ever experienced.

This is a stretch, but it would be totally cool if you incorporated the hand drier technology into all other facets of this bathroom, from toilet flushing to air fresheners. Seeing that that's not exactly realistic, then some well-placed air fresheners should do the trick to drop that urine smell some.
at 13:57

without doubt the hippest, narcisistic and cleanest toilets in the Capital, has to be the NEW Annies Bar on Kentish Town Rd, is this the beginning of a rejuvination project for NW5? 11