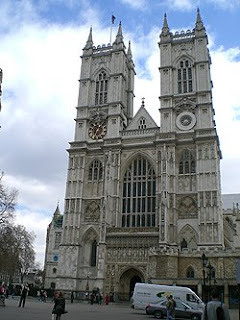 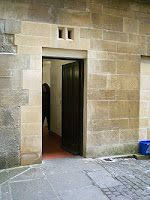 Westminster Abbey consists of several buildings and gardens, the most famous of which is the main church, which contains countless tombs of famous British citizens past and present. The bathroom visited here was just outside this main church, or Abbey.

To find it, first enter the main church and head towards Poets' Corner, found in the Abbey's South Transept. Once there, head through the small doorway to the back left of the area (when facing the back wall). This takes you outside to a small outdoor enclave.

One there, look to your left and you'll see an entrance to the public restrooms, which contains several unisex stations inside a main bathroom area. (Think of it as a set of independent one-bagger bathrooms connected by a lone hallway.) Upon entering, an attendant tells you which station to go into. 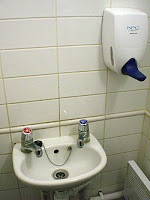 Built in 1066, the Abbey itself is a marvel of stonework and medieval architecture. The walls and ceilings are filled with elaborate carvings and mammoth paintings, and glorious, intricate stained glass fills most of the looming archways and gables.

On top of this, as mentioned earlier, you'll see tombs galore, including nearly every member of the British royal family, a slew of historic military heroes, statesmen and scientists, and plenty of world-renown, artists, poets and writers. (And if you don't find the ones you're looking for here, head over to St. Paul's Cathedral across town, which houses even more of them.) 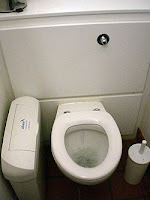 The tombs give a visit to this church an air of creepiness, that's for sure. The bathroom's, thankfully, don't follow that model. Instead, they are standard latrine facilities set just outside the church proper.

Not that they're anything exciting, mind you. The stations here (there are about six or seven inside the bathroom complex itself) are covered with white tile and feature white toilets, sinks and the lot. Nothing very memorable, really, except that they're set in a memorable location. 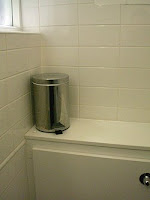 The toilet I experienced was set inside a white wooden cover box, with a push-button flusher and toilet brush to one side and a space head to the other (for those chilly winter visits). The box itself forms a shelf above the toilet area, on which sits a trashcan meant for sanitary napkins.

The container itself, according to the sign posted to the right of it, is called a "FEMBIN." Get it? Of course, the FEMBIN is placed next to the lone window in the chamber, leading me to think more than just sanitary napkins are placed in it, despite a warning placed on the sign beside the FEMBIN reading: "Dear Visitor, PLEASE ONLY USE THE FEMBINS FOR SANITARY ITEMS. Thank you." (No, it's not grammatically correct, but who will fault the English for that, right? Or for not following directions posted?)

Opposite the toilet is a small sink (the standard European kind, which is small because the space around it is small), fitted with the standard British duel-faucet system (one for hot water, one for cold -- which I never understood, because what do you do if you want warm water? Fill the sink? Not very environmentally sound, is it?). A rather phallic soap dispenser and a small box air drier hang to the right of that, and a very plain sheet of mirror glass hangs over the sink. 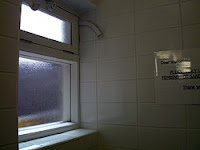 Overall, thanks to the good job by the attendant, it's a clean place, and very functional too, which I guess is what you want from a tourist attraction toilet. Though I should say I found some visible wear and tear here: The grout work is a bit dingy in places and the floor tiles (no doubt because of the number of visitors who come here) are scuffed in parts.

Still, as far as tourist attraction bathrooms go, it's far better than the toilets experienced at, say, the Hermitage in St. Petersburg, so for that it should be commended.

Finally, there was a faint stink of urine present in the air. In a way I expected it to be stronger -- partly because of the latrine-like atmosphere found here and partly (sorry, David) because most British toilets I've visited in the past can't hide their urine smells even if they try. You can take the toilet out of the latrine, but you can't take the latrine out of the toilet.

6. A decent, albeit straightforward, experienced. Though nothing nearly as memorable as the church beside it.

You might want to consider inserting an air freshener or two here, just to (as the name suggests) freshen up the air. Also, it might be time to put some bleach on the tiles. Finally, how about a little wall decor -- I know you're not supposed to compete with the star attraction, the Abbey itself, but a few pictures of the Abbey or nearby Parliament would surely go a long way. (Or perhaps even some St. Paul pictures, just to start an unwarranted rivalry, eh?)
at 14:08