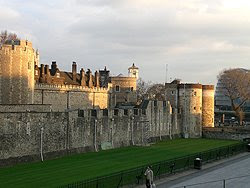 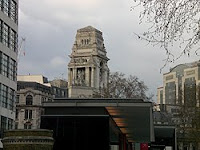 This public toilet isn't in the actual Tower of London. Rather, it's on the east end of the plaza that is just east of the Tower itself, which takes up the space east of the tower to Lower Thames Street and the stretch from the Wharf (south of the Tower) to Byward Street/Tower Hill (the major thoroughfare north of the Tower). It's an expansive plaza, really, with plenty of viewing spots for picture taking and site seeing, access points to the Tube and public water taxi and plenty of dining and souvenir buying options.

The toilet itself is set on the strip of shops found on Lower Thames Street after it turns north towards Byward Street. On your left will be several souvenir shops as well as some cafes. The bathrooms are on that stretch, about three storefronts from the end of the stretch. (If you reach Byward Street, you've gone too far.)

Look for the WC sign on the building front to see where the entrance is. Then enter a small enclave. To the left is the ladies' room, the right is for men. The view from the door offers a great vantage of the Tower complex itself. But outside of that, don't expect this enormous bathroom to be much like the Tower of London. There is no historic architecture or artwork here, nor any bloodied history of ruling families trying to take each other out for the sake of power. And there are no pictures or thematic elements to make you think you're inside the Tower either.

While it serves the many visitors to this historic site and popular London tourist attraction, the facilities themselves are little more than functional bathrooms that accommodate many people at one time. 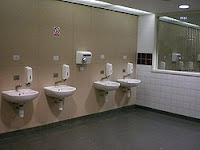 Of course, that makes them sound bland. That's hardly the case. If anything, their functionality and cleanliness should be applauded. I made two visits to the facilities while in town, and both were exceptional. One time, I had the entire place to myself and took the opportunity to delve more deeply into it and enjoy the roominess, cleanliness and quiet of the place. Another time, I had to share it with a bus load of Italian school children, who were there as part of a field trip. Their presence made the place more hectic and noisy (and rowdy, especially as two of them broke out into a fight and I had to push my way through the gathering crowd to get to the exit), but it was still clean and everything was in stock and well-kept and in running order. Kudos. 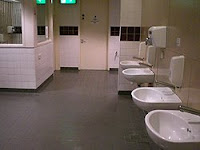 The facility has a unique, very functional set up. Urinals, those standard cone-shaped ones you find all over Europe, are set up in a room to the south side of the bathroom, almost military-like in the way they face each other and ready for the worst. In the room to the east of them is a series of sinks, soap dispensers and hand driers, as well as a small office for an attendant. A stretch of stalls fill up the rest of the place, essentially making up the west and north walls of the bathrooms.

Standard black linoleum covers the floor, with beige paneling and white tiles covering the walls. The stalls have matted red colored walls and dividers, as well as beige doors with round mirrors on them, which give the stations a somewhat nautical feel -- like these were the toilets on a cruise ship or something. Stall doors are thick and stretch to the ground for maximum privacy. 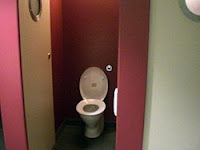 Everything was spotless here and in working order. The faint smell of urine did tinge the air, but as mentioned in my review of Westminster Abbey, that seems to be commonplace in British toilets.

Most impressive here is the vast amounts of space one has to move around. Each area offers plenty of walking room, which certainly came in handy when that crowd of students was in there with me.

8. Very impressive for such a bare-bones facility.

Not sure what else could be done. Decor would only cheapen the experience.
at 14:54

I think you mean to the west of the Tower...

Yes, definitely to the west of the Tower.