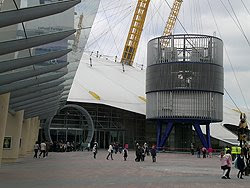 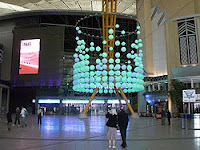 Leave the Underground exit and follow the signs to the O2 center.

Once there, head inside and make your way through the many restaurants lining the interior of the place, heading in the direction of the movie theater located in the center of the complex, on its second floor.

Once in the vicinity of the movie theater, look for a restaurant called Frank and Benny's, a New York-inspired Italian joint. The bathrooms are to the right of that restaurant, just underneath the escalator leading to the movie theater ticket office and behind the building's enormous support beam. 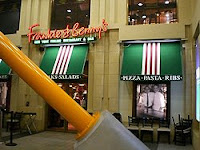 The O2 is a state-of-the-art convention center/mall located in the far east end of London, right next to Greenwich. It's a mammoth complex that in a way looks like the world's biggest circus tent.

Inside you'll find dozens of restaurants, bars, exhibit halls, performance stages and more. It's a very clean environment filled with plenty of entertainment options, both upscale and casual.

Given that, you expect the toilets to be quite high-end, or at the least somewhat technologically impressive -- the food quart toilets at the Mall of Millenia (our pick for the Best Toilet Experience of 2007) or those experienced at the London Eye. 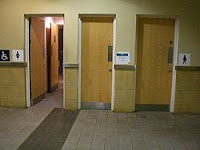 Sadly, that isn't the case.

These are somewhat tight facilities with white tiled floors and walls. The walls were pretty clean but the floor wasn't (see below).

A set of urinals has been set up on the back wall, with a stretch of toilet stalls opposite them. A vanity area, with two sinks, sits in the front of the place, with the two areas connected by a short, somewhat narrow passageway. 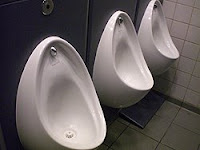 Nothing very spectacular or worth seeing here, unless you consider the sinks in the vanity. These are white porcelain sinks with long candy-cane-shaped chrome faucets that are somewhat confusing to work.

The sinks themselves look like they are caught between being pedestal sinks and free-standing bowls but can't decide which. Because of that, they manage to be both good for keeping running water inside the bowls (because they are deep) but also hard to manage and reach. Go figure. 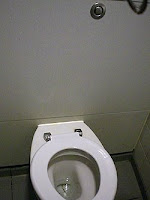 Also, the faucets work on a three-way directional system, in that water flow is controlled by pushing the level backwards and forwards, and the various temperatures are controlled via left and right motions.

Because this isn't straightforward, the management has posted a laminated set of directions on the wall to help people -- but unfortunately, that doesn't help either. You pull and push on the faucet continuously -- sometimes you get water, sometimes not; given that, temperature control was not as important as getting the soap off my hands.

The urinals and toilets were nothing special -- both white porcelain. Urinals were on an auto flush system, whereas the toilets had a push-button flush. 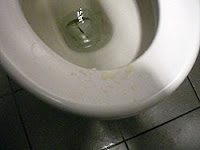 In addition to being pretty gross (especially if you're there to go #2), it hints that perhaps the size of the bathroom doesn't equal the draw.

And speaking of urine: The place reeks of it, and of poo too. Very bad odors here, which seem to be made all the worse because of the close quarters and lack of strong ventilation. The stink just seems to sit heavy in the air here. Very gross. 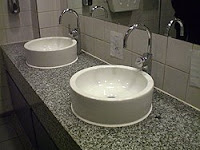 Getting out of this place felt triumphant, as did that first breath of fresh mall air. Ick. 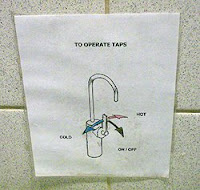 Lots of work needed here. First, seriously consider expanding the place some -- you're obviously getting too much traffic to accommodate the space. Second, get some better ventilation and some air fresheners in here -- very putrid and stifling inside.

Finally, clean the place better. What I mean by this: I noticed that there was an attendant station next door to the toilets, and I even noticed an attendant in there, and she even passed through the toilets once to clean them while I waited for my companion to finish her duties.

But I made "before and after" visits in that time and that didn't see much of a different. The obvious messes were mopped up, but much of the rest wasn't. Perhaps it's time to implement a new cleaning system or more aggressive tactics. This place surely needs it.
at 14:45