Outdoor Toilets at Blenheim Palace Far Superior Than Indoor Ones 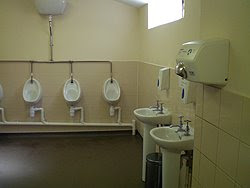 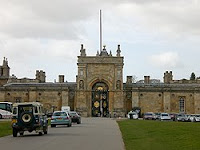 From the Woodstock side, walk along the entrance road about 1/2 mile, paying for admission at the gate when you come to it, and head towards the palace entrance that faces you. Once there, skirt around to the right of the building. You'll see signs leading you to the toilet once you do -- and the toilets themselves will be around that first corner, about 200 feet down. 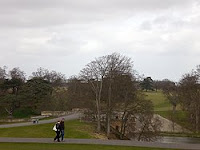 Home to the Duke of Marlborough, as well as the famous Spencer-Churchill family, whose decedents include Winston Churchill and Princess Diana, Blenheim is a majestic estate boasting gardens nearly as extravagant and vast as those found in Versailles, and a sprawling central building that rivals Versailles in opulence.

That is no coincidence. According to our guide, the palace was designed in the 1700s to rival Versailles. After the French Revolution in 1793, Versailles was ransacked and its contents put to auction. The Duke of Marlborough purchased a number of artifacts from the palace for use in his home at the time, many of which are still on display inside. 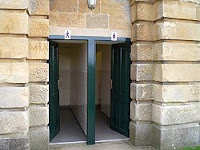 Blenheim also is the birthplace of Winston Churchill, and a quarter of the house is filled with a large exhibit cataloging his military, diplomatic and artistic efforts. The exhibition culminates in a tour of the room where he was born, outfitted in the original turn-of-the-20th-century furniture used at the time.

Inside, visitors can tour select halls and rooms where the Duke and his family still currently reside. They can also get a glimpse into the building's complex 300 year history by way of guided tours and an animatronic show. It's very lavish, art-filled environment and a great way to spend the day if in the area. 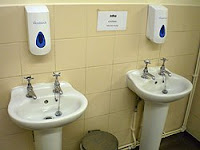 The toilets described in this review are the ones allotted to the people who prefer to walk the expansive palace grounds instead of heading inside. (A review of the indoor facilities can be found here.) Though you expect the indoor ones to be more luxurious in quality, the outdoor ones are actually the better choice for use, no doubt because they are not visited as regularly as the ones inside. These are clean, functional facilities that are perfect for a needy stop. 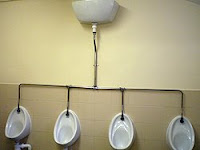 The setup is simple: The outside wall houses two pedestal sinks, soap dispensers and air dryers. The back wall houses a row of four urinals, each hooked up to a single pipe system that performs automatic flushes on a given time table. On the inside wall are two toilet stalls with green stall dividers. The stalls are roomy and the seats are made of wood, to give them an added touch of elegance (nothing too exotic, however). 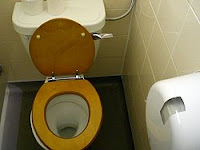 The walls are covered in simple beige tile, the floors are black-linoleum covered concrete -- again, all very functional. It's clean, with some spots of wear and tear visible but nothing too bad or alarming.

The walls are devoid of decorations for the most part, except for a few signs indicating upcoming functions at the estate (why people don't do this more, I don't know, since it's such a simple addition and adds some quick personality to the environment). 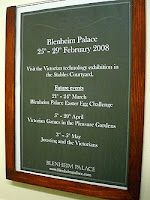 The place smells faintly of urine, but nothing too awful -- about on par, if not a little better, with what I experienced at the British Museum and far better than the ghastly and putrid toilets experienced at the O2 and the Oxford Railway Station.

Strangest part of the visit: The sign hanging between the two sinks, reading "CAUTION! Very hot water." Something tells me the place has had a few incidents that rival the now infamous McDonald's coffee lawsuit. 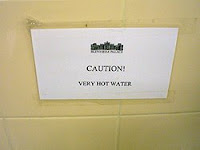 A few more pieces of wall art or ornamentation might make the place more a little more personable, though as it is it's not too bad. Do consider one of those mounted air fresheners though, just to ensure a stink-free visit (see the Monsoon's toilets for ideas).
at 13:56