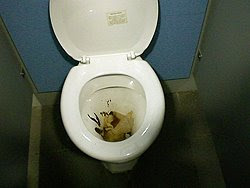 In between the ticket counters and the train gates, on the back wall of the complex.

This is one of those standard train terminals with a central sitting area, a selection of various vendors (book store, walk-up cafe, sandwich shop, etc.), a ticket counter area, toilet facilities and such. It's a few blocks away from central Oxford, which makes it a good place to start your tour of the city. Other than that, it's a pretty bland location.

The toilets here are very Teutonic and not very clean, with blue walls and concrete on the floor. They are small and somewhat crammed, and when I visited there were so many people in there that it felt like a subway station at rush hour.

(In fact, it was so crowded that I couldn't even snap any good pictures -- besides not being given the chance to be discreet, I didn't have room to stretch enough to take out my camera!)

The urinals are lined up against the front wall. Behind them is a row of toilet stalls, about three or four. Maybe 2 feet separates the former from the latter -- which, of course, doesn't give you much room to breath here. The sinks are at the front, and if you walk in while someone's at them, you get stuck in the doorway because of the lack of room to move around.

The urinals all had these bright orange urinal cakes in them (more cylindrical in shape than the traditional hockey-puck-shaped ones I'm used to), which emitted a strong chemical stench. That unpleasant aroma mixed poorly with some sharp urine smells, as well as some horrid fecal smells.

The toilets were no better, as the two stalls I visited (the first was too gross to use) looked like they'd not been cleaned in the better part of two weeks.

2. Just a disgusting experience. I wanted to shower after leaving.

Space-wise, you may want to consider a better layout, since the one you have now makes it difficult for more than two people to use the place at once -- quite a setback for a place that should accommodate 10 easily. Also, I realize this place is visited by a lot of students, many of which could care less about cleanliness, but just because they don't, that doesn't mean you have to as well. I realize it's hard to clean such crowded restrooms, but there has to be a different way -- if airports can do it, why can't you?
at 18:33