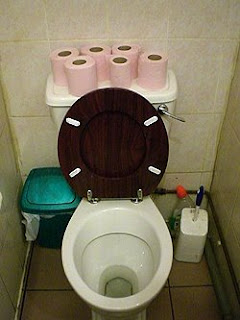 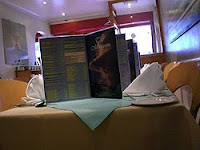 This is one of those places that is much longer than its narrow width store front. Like Angelo's in New York City, the restaurant stretches back some from the main street and it's dining room is split into multiple parts, including a bar area in the back, a casual cafe up front and another dining room upstairs.

To get to the toilets from the front entrance, walk in and head towards the bar. With the bar on your left, look for doors on your right leading to the toilets. Pretty simple, really. 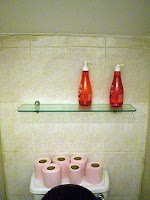 This is a friendly, unassuming little Indian restaurant (I learned later that it's specialties are Bangladeshi cuisine) with friendly service and decent food. A bit crammed inside, mostly because it is such a narrow place, but still good nonetheless. Not the best Indian food I had while in London, but certainly not the worst either. I found the curries here to be sweeter than expected, which I wasn't quite prepared for.

We went in because we were walking along Brick Lane, searching for a place to eat, and one of the proprietors came out and coaxed us in -- which, I learned later, is the custom on this block -- and also because the place's front window had lots of accolades from local papers, which, seeing that I was a tourist, carries some weight. I have a feeling that if I'd ordered more traditional Bangladeshi dishes instead of more standard UK-inspired Indian food, I would have enjoyed it more. Still, I thought the food wasn't bad at all, though my companion was hoping for something less sweet and Thai-influenced. 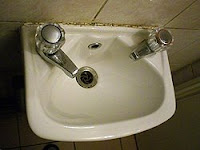 The dining room here, as stated earlier, is tight, but it's clean and the service is friendly and welcoming. The men's bathroom is equally tight (my companion said the women's toilet was very spacious and comfortable), mostly because it's a standard European-sized toilet, made smaller because of a somewhat low ceiling. Not as low as say Pizoodles but still low enough to make you feel like you're auditioning for a role in a Marcel Marceau picture. This was one of the smallest bathrooms I've been in since my trip to Russia, where I experienced such confining places as at the Petro Palace lobby or the SkyBar. 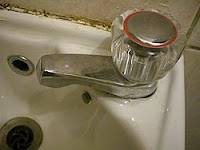 The place doesn't offer much to look at. Beige tile covers the floor and walls. The toilet is set in the back of the closet, with a small glass shelf hanging overhead. The sink, a small one with separate hot and cold faucets, jets out from the wall near the entrance, with an air drier fixed above it and a soap dispenser hanging nearby. The grout connecting the sink is pretty worn down but nothing ghastly. It's a clean little place, and not smelly at all, which surprised me because of the cave-like atmosphere here. (Note: The small exhaust fan set up above the door really did the trick. Couldn't see the model, however.) 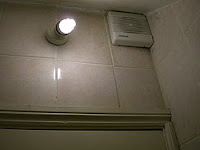 The highlight is the massive amounts of pink toilet paper found here, especially on the back of the commode tank. There were six roles here, as well as a few more on the paper holder, which made me a bit curious. Also, all the rolls were used to some degree, some nearing the end, some just starting, some halfway finished. Why?

Furthermore, why didn't people just use the rolls hanging on the holder and use those up before reaching for the one's on the toilet tank? Very strange. 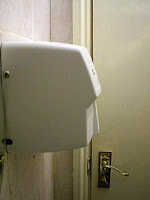 Also strange was that the glass shelf above the toilet held two bottles of generic hand soap, even though there was a dispenser next to the sink. Was the hand soap not as good as these? Why have the hand soap there at all, if that's the idea.

Or maybe the concept here is to offset the small space available here with a surplus of strangely colorful items?

6. It's clean and small and has lots of pink toilet paper. That's about it.

I'm imagining that because the building is somewhat old you cannot do much to make the bathroom larger in size -- like the supposed size of the women's room. Given that, you can add some more mirrors to increase the lighting to the place, which could help make it seem bigger. Also, consider storing stuff elsewhere. Finally, lose the pink toilet paper -- that's just weird.
at 15:01