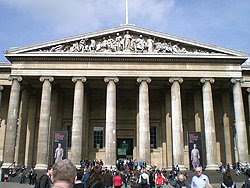 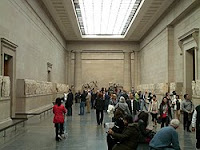 On the first floor, in the hallway in between the China/South Asia exhibit hall and the north lift elevators. Of course, you'll need a map to find out that location, but once you get there.....

This mammoth museum is one of the great cultural experiences in all of Europe, housing a plethora of exhibits drawn from the British Empire's once prominent rule over much of the world. 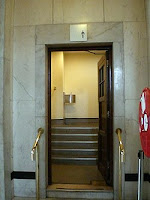 Artifacts here include outstanding exhibits on Egyptian mummies, recreations of the Parthenon, medieval coins and metal work, modern art projects, Islamic and Indian artifacts and much much more. It's a sprawling complex packed with people of all ages -- and best of all, it's free!

The toilets visited here take a while to get to, because of the size of the place. Still, they are a worthy stop. As with most museums, the best bathrooms tend to be in areas that draw fewer people. While most head to the terrific exhibits on ancient Egypt, Rome or Greece, this one (next to the Asian artifacts area) seems more removed from the main action and as a result it was empty when I arrived and stayed that way throughout my visit. 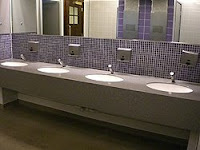 It's a standard multi-use facility, with urinals set up on the back wall, a wide central area allowing for easy passing to the vanity and stalls (good if the place ever gets too crowded) and a set of stalls positioned along the front end of it, with full doors and walls as dividers (instead of standard stall walls) to maximize privacy.

The floors are standard concrete, and the walls are covered with white tile with purple highlights. 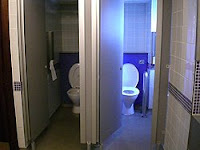 Not sure if I agree with the purple part, since this place isn't trying to appear hip and cool like the London Eye toilets. It makes the whole place look like some failed PO-MO art experiment. Maybe a good idea for Soho and the Tate Modern, but not here, if you catch my drift. Here, I was hoping for something classy and a little bit more traditional. Though I admire the effort taken. 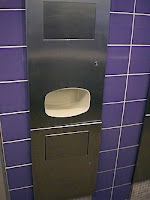 The place was clean, relatively odor free (again that looming hint of urine, but nothing too bad) and quiet. The vanity features four sink stations, all set in a gray marble counter (with a similar-looking mini-tile backing), and a large stretch mirror hanging overhead those stations. Sinks are automatic, though the soap dispensers are manual and a bit dated in design.

Visitors dry their hands by automatic air drier, the latter of which has you place your hand into a small hole that's about the size of a shoe box and then blows air on your hand. A bit awkward to use, but certainly unique. A nifty add-on and different than what you'd see at many other public restrooms, but as hand driers go, it's not even close to being in the same league as the one experienced at the London Eye toilets, which is just downright cool. 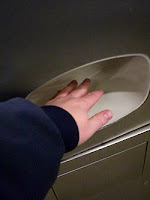 The toilet stalls themselves were roomy enough and I like the fact that you're surrounded by full walls and a full-sized door. They are similar in size to what I experienced in Westminster Abbey, only with more privacy and without the nearby attendant. Also, I liked the stainless steel toilet paper holders, which stack the rolls on top of one another and serve both as a dispenser and storage bin.

On the flip side: While I found the place clean and comfortable, it was also a bit on the cold side (meaning that it took a while to feel welcome here). I understand it's supposed to be a bathroom and nothing more, but in the end the design kind of turned me off. 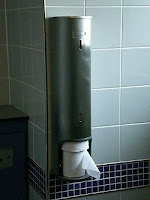 7. It's a place that tries to reach beyond its Teutonic nature, and I must commend it for that, but it doesn't always succeed in its attempts and sometimes feels like the attempts have backfired.

I like that you're trying something different here with what essentially is a stuffy museum bathroom. Still, not everything works aesthetically, and as a result I often felt like I wasn't welcome there. Consider warming up the place some with some wall decor or some warmer colors, like yellows and browns. Might want to consider looking at the Mansion on Forsyth Park in Savannah for some inspiration.
at 14:23