Seen One Sam's Club Toilet, Seen Them All 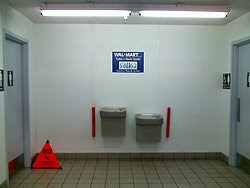 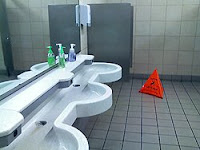 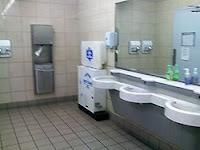 This is our second visit to a Sam's Club bathroom (the first being the Sam's Club in Melbourne, FL) and really I can't see much difference between the two I've visited, feature-wise or design-wise, outside of the fact that this one is a bit smaller than the Melbourne location. An ironic twist, really, since this warehouse store is actually bigger in size than the store in Melbourne. Why that is, I can't even begin to speculate.

Anyway, like that location, this is a boxy environment with gray tiles on the floor and off-white tile on the walls. Both were a little scruffy and worn down but nothing too impossible to deal with. There are three toilet stalls here, with the back one being the handicapped one. The toilets are white porcelain, each a little lower to the ground than what I would have liked (not as low as the DeSoto Hilton toilets in Savannah, GA, but not too far off). They have automatic flushes, gray dividers that match the floor tiles and Teutonic plastic toilet paper holders.

For the most part, they were clean, though there was some detectable grunge on the grout and some dribbled water on the floor around them. Everything was in working order in the stalls, except the middle stall, whose automatic flush wasn't in operation, as indicated by the sign above the toilet reading, "MANUAL FLUSH USE HANDLE!" 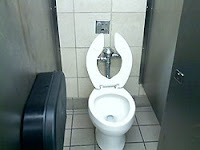 Opposite the stalls is a large vanity area with a 10-foot-plus stretch mirror (no frame) fixed to the wall and a plastic trough-like sink (same style as what we saw in the Melbourne location) which has sensor-driven faucets set above a number of pull-outs in the trough (you stick your hand under and three weak streams of water hit your hand). The sink trough, like the toilets, was also a bit lower than I would have liked it to be.

No automatic soap dispensers and instead atop the sink are various pumps of hand soap (again, like the Melbourne location). Though, it should be noted that there is a proper soap dispenser fixed to the wall to the right of the sink, but it was empty and looked like it hadn't been used in ages. 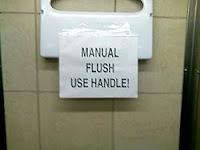 A steel towel dispenser and two hand dryers hang on the wall to the left of the sink area, as does a baby-changing station. To the right of the sink are two urinals, one low and one high, with a gray divider in between. There was a sign in front of the urinals for a wet floor -- I'm thinking there's some leaking issues (both from the pipes and the people visiting it) there. 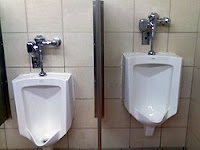 The place had a slight smell of urine, but nothing terrible. One question I had with it though was the wired plug I found below the handicap stall sink. Why was it there? What did it connect to? I have no idea. I just seemed weird, seeing it there, and I wondered how many sparks would fly if/when that sink overflowed with water.

5. Same features as the Sam's Club we visited in Melbourne, FL, but it's smaller, not as clean and very worn down. 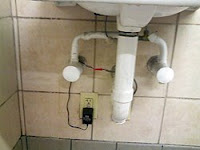 Place needs a good sprucing up, as well as some updating. Time to really polish those tiles, get the toilets in working order, fix the leaks and put some water pressure behind those automatic sinks. Also, couldn't hurt to hide the wiring below the sink in the handicap stall -- just looks dangerous, hanging out there like that.
at 15:31