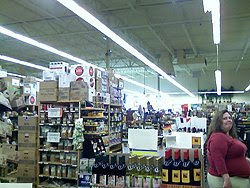 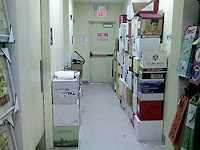 From the front entrance: Head to the back left corner of the place, which is the store's wine department. Once there. look for a small hallway (very back corner, against the back wall), which will be filled with various wine, beer and soft drink boxes. 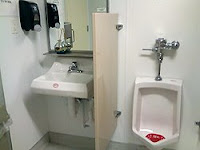 Another home furnishings and housewares store, another bland bathroom. Just like Bed Bath and Beyond and its cousin red-headed step-cousin Linens-N-Things.

This chain spices up the usual home furnishings and housewares approach by adding a touch of Pier 1 to the mix. So guests here can scour shelf after shelf of dinnerware, glassware, home furnishings and such, but those items have a touch of the exotic to them. Lots of Polynesian-themed wicker baskets and chairs, for example, or wine glasses that exemplify the craftsmanship and style of the pieces over their functionality. It's a lot like heading down the anything-goes merchandising aisle in a T.J. Maxx or Marshalls, only expanded to an entire store. 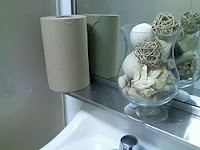 The highlight here, of course, is the food and wine section, which features everything from unique specialty items (including gourmet spices, coffees, dry goods, canned goods and more), many of them from Europe or from small independent businesses in the U.S. (very little mainstream here) to a decent wine selection that offers a good array of mid-ranged bottles from around the world, with an emphasis on California and Australian wineries.

Like all home furnishings and housewares stores, the interior here is stylish and slick and seems to emphasize the act of impulse buying. Heck, flatly put there's nothing here that's really a necessity, so if you're not here to buy on impulse, I can't see why you'd come here in the first place. 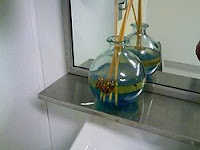 Given that, you'd expect the bathrooms to have some style -- and going in I thought they would easily best the flatly designed toilets found at Bed Bath and Beyond and Linens-N-Things.

That's not the case. Rather than offer up a cool environment (for some reason, I keep picturing these massive housewares stores to house bathrooms like the ones I found at Shiki on the Beach), these toilets were surprisingly warehouse-like in feel and reminded me a lot of the facilities found at Total Wine Orlando or Total Wine in Raleigh, just without the sharp stinks of poo and pee present there. What gives? 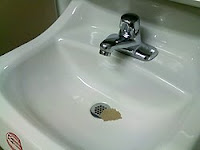 Of course, unlike those places, there was some decor here, namely in the appearance of two lonely glass vases filled with various wicker balls positioned on a lowly stainless steel shelves below the mirror and above the sink. Also, there were two framed posters displaying monthly sale offers (10% off of this, etc.), but that was about it.

On a housewares store scale, it fell below the familiar but trusty tile work of Linens-N-Things but it was step above from the poorly installed product placement at Bed Bath and Beyond. 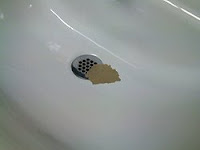 The walls are white drywall, the floor covered in white linoleum, with gray rubber trim along the sides. The place is small, with one large handicapped accessible stall for doing number two, one urinal and one sink -- the latter two items placed a little to close together to offer much privacy, especially when compared to the stall.

The toilet and sinks are white porcelain and clean though a touch weathered. The sink has one of those push-down faucets to limit water control. A plunger stood idly by the toilet, making me think clogs were common. Black soap dispensers hung near the sinks (there are two here, if you count the one in the handicap stall), and it has a couple of those hand-crank paper towel dispensers (instead of automatic). 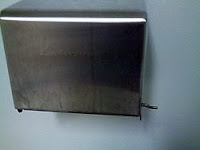 Not exactly the most modern of places, but it's clean and odor free, which makes it perfectly serviceable.

As for oddities, I found two: First, there was a roll of paper towels sitting on that stainless shelf beside the glass vase. Why it was there, since the crank towel dispenser was just a few inches away, was beyond me. Still, I thought it was worth pointing out.

Also, there was a torn-away strip of paper towel in the main sink, and it was stuck next to the drain. What was unique about it was that it was dry in the sink -- or at least it appeared dry (no way in hell would I touch it), because even after I used the sink it and knowingly spilled water on it, it didn't look wet at all. 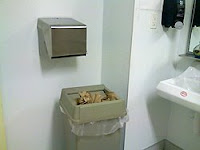 Of course, I thought it might be the quality of towel offered there, that perhaps they repelled water. But I used the ones from the dispenser to dry my hands and they did an okay job. Perhaps it's a piece of paper fashioned from the same magic as the floating toilet seat seen at Thai Singha?

6. Serviceable and clean but nothing special. 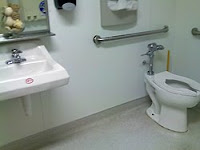 It's a perfectly functional toilet. I would just like to see one of these housewares stores actually live up to the promise they are exhibiting on the sales floor. Is it that difficult? Or are the toilets just not a priority? If American Signature Furniture South Orlando can do it, why can't you?

On a different note, I would like to market some of the magic used to keep that bit of paper towel dry.
at 14:14