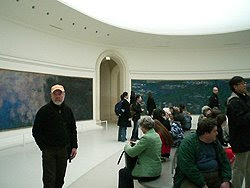 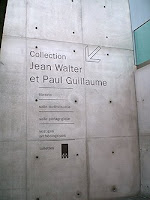 You enter the museum on the top floor. After going inside, walk past the ticket and coat/item check counter and into the belly of the building. Once there, you'll see stairways leading downwards and a bridge taking you to the back half of the museum, where Monet's mammoth "Waterlilies" are exhibited. 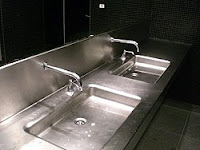 This modern-looking museum, home to Monet's famed "Waterlilies" murals for more than 100 years, is a modest art house compared to most Paris museums. That doesn't mean its small, though. It's just not as large as, say, the Louvre of the D'Orsay.

The focus here is on Monet's masterpiece and the other impressionistic works from the same period (mid-to-late 1800s and early 1900s). So visitors here can explore a dozen or so galleries dedicated to masters like Renoir, Picasso, Matisse, Rousseau, Utrillo, Soutine and Derain, among others. The galleries are large but modest in design, allowing you to get up close and personal with these masterpieces and take your time viewing the art without fear of going to slow. 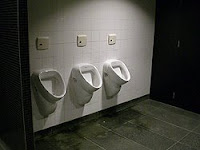 The centerpiece, of course, is Monet's enormous murals, which comprise two entire gallery halls of the museum, both of which are lit exclusively by natural light, making the experience that much more organic. For fans of the era's art, this museum can't be beat in terms of collection, experience and quality. Coupled it with an afternoon at the nearby Musee D'Orsay for a modern art experience of heavenly proportions.

Though the works here are of rooted in the golden age of Impressionism, the design of the building and the bathrooms are decidedly post-modern. Concrete is the main building block used here, and its implementation gives the place a cool, slick look and feel (which is quickly warmed by the matted colors found in the various galleries). 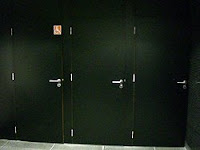 The toilets here make the most of these constructs, but not always to good effect. Visitors experience a dimly lit environment with little wall decoration (just concrete, really) and plenty of po-mo touches.

The central area of the men's room is large and cave-like at the same time, and despite the apparent roominess of the place it still feels very claustrophobic, even prison-like.

A set of three urinals stand along the front wall, looking like art installation pieces (a technique that reminded me a lot of the toilets experienced at Sensi and Okada in Las Vegas.)

The stalls along the back wall are separated by floor-to-ceiling doors, which are triggered to turn on a stall light whenever you open, close and step inside. Thus, when you first open the door, the light above the toilet is off, making you think you're about to enter a stall that will have you doing your business in near-pitch blackness. However, after you close the door, the light turns on, easing those sudden fears. 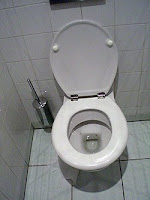 Of course, the light is very sharp and at first makes you think you're sitting under a heat lamp, which doesn't necessarily make you feel any more comfortable than you would you feel by sitting in the darkness, come to think of it.

If that weren't bad enough, the stall doors (because they are floor-to-ceiling and require some thicker material to compensate for the wiring switch inside them) keep odors in the stall with amazing skill. Thus, when you first open that door and see a small toilet in a dark stall, you get a nasty whiff of the previous inhabitant's business and it makes you think you're about to enter the deepest gate of hell..... Yes, very bad.

On the plus side, the stalls are covered with beige tile and the toilet is fixed to the wall in an ornamental fashion that again reminded me of the toilets at Sensi and Okada in Las Vegas, which employed a similar effect. 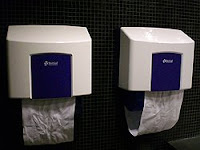 The flush mechanism here is foot-pedal based, however instead of having a standard pedal to step on, the designers have chosen to use a rubber push pedal thingamajig, which (no doubt because it's gotten worn down over the years) requires a good deal of pin-point pressure to initiate (you really have to press down on it), which in turn strains your foot and leg some because you thought it would be easier than it was.

A similar rubber push pedal mechanism is used by the vanity, to start the flow of water at the sinks. The sinks here are stainless metallic troughs built into a concrete slab. When you approach them, you think the water will come on automatically (the sleek design gives you that impression, as does the fact that the urinals have sensor-driven automatic flush mechanisms attached to them) but it doesn't, and as a result you start scrambling, looking for a way to turn the water on. Not very fun after you've soaped up your hands with a basic push-pump dispenser, I should add. 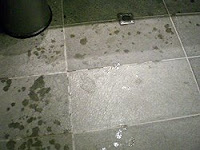 Anyway, it took me a while to figure out that to push on these rubber dots on the floor with your foot to get the water to start. And really, had I not visited the toilet moments earlier, I still might be there, trying to figure it out. And like in the toilet the pedal is hard to push, making it hard to keep the water on while you wash up. This is easily the most confusing and most difficult-to-use water faucet I've ever experienced -- even the O2 gave us directions, you know?

Given all these po-mo additions, you would expect to find an automatic hand drier. But no, there isn't one there either -- like the soap dispenser, the hand towels are kept in those primitive European models that essentially keep a long towel bound up inside a container. You pull the towel down to find a dry spot and dry your hands. Like all those old contraptions, the towels always jam and you have to dry your hands on a wet towel. Fun.

Also worth noting: The towels are at the opposite end of the room from the sinks, and as a result water gets dribbled everywhere after you wash your hands and those drops literally liter the floor, thanks to the concrete tile here, which highlights the water spots all too well. This is the furthest I've seen a towel dispenser put from a sink since my visit to Famous Phil's in Orlando.

5. The po-mo touches are interesting at first, but the lack of functionality here, as well as the cave-like/prison-like feel and harsh, looming smells, ultimately make this a foul toilet-going experience.

I appreciate you wanted to do something different, if not fitting, to the environment. However, you still need to remember the basics, which it seems are not a consideration. For one, increase the ventilation here so the smells aren't so sharp, especially in the toilet stalls. Second, move the towels closer to the sinks. Third, put some direction sheets on the walls so people know how to use the foot pedals. Fourth: Consider piping in some house music here to make the place a little friendlier. Fifth: Make those foot pedals easier to use, either by installing new levers or making them sensor driven. While it may feel trendy on the surface, a public toilet shouldn't be so purposefully off-putting.
at 13:31