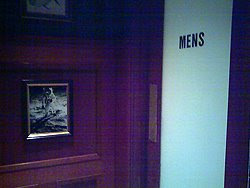 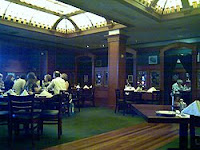 A bit tricky to find, but not impossible. From the front door, head inside. As you do, you'll see a bar on your left and a dining room on your right, and a white-tiled hallway leading down the center of the place, separating the two halves.

Go down that hallway. It will take you past the oyster bar, the prep kitchen and a small enclave where the bathrooms are located. (That's not the end of the hallway, mind you -- the toilets are only halfway down. At the end is the main kitchen and storage areas.) 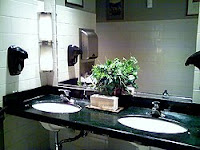 This upscale seafood chain boasts an elegant, almost turn-of-the-century interior design, with plenty of stained glass, dark wood and old-fashioned tavern-inspired lighting. In many ways, it's like the Americanized version of Montparnasse 1900's dining room.

And the dining room is roomy, with plenty of well-spaced tables and wide walkways, allowing people to get a sense of the bustling nature of the place while being able to enjoy their privacy as well. Service is very professional and polite, and the food is very good, particularly the seafood (as you can expect), which (so states the menu) comes in fresh daily. 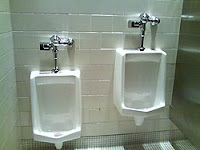 The toilets extend that turn-of-the-century feel, coming across like a cross between a much more sophisticated take on the bathrooms of Bennigan's or Macaroni Grill, albeit with fewer in-jokes and more class. Picture a mixture of Angelo's on Mulberry with Philadelphia's Davio's, with a dash of JFK's Delta Crown Room, just smaller, and touches of Big Boy Diner and Sleuth's Mystery Theater's lobby toilets.

The walls and floor here are covered in white tile (similar to Montparnasse 1900), only that the walls have a five-by-five-inch (give or take) tile set and the floor is covered in small inch-by-inch tile. The tile all around is spotless and gleaming. 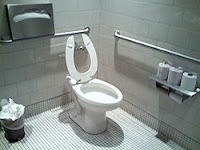 There are two stalls here, a standard and a handicapped. Both are roomy and well-stocked and clean, like the rest of the place, with white porcelain thrones sitting center stage. The urinals stand proudly in the bathroom's middle section, one lowered for children and one at regular adult height. Though there are no dividers, they are spaced well enough to allow for a good deal of privacy.

The vanity is made of a black granite top, which offers nice contrast to the white tile around it. A lot of what's around the vanity is matted chrome -- and the the paper towel dispenser, thanks to this design -- offers a unique spin on a commonly found item. Just enough to keep it interesting and make you think, "Hmm... haven't seen one like that before, have I?' 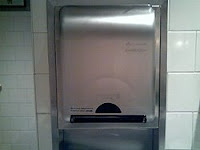 With all the automatic stuff found on the vanity, I found it a bit surprising to see a manual soap pump set to the side of each sink. Not a bad addition -- and a bit reminiscent of Johnson Lexus in Raleigh, NC -- but I wouldn't have minded something a bit innovative there, like I saw with the paper towel dispensers. Nothing mind-blowing, that is, but certainly something that freshened a familiar item some.

Decor is minimal here -- the only decor I found, actually, was on the vanity and below it. There's a stack of paper towels there (in case you don't want to use the dispenser?) and a group of faux greenery behind it. Can't say I liked it much -- more than anything, it got in the way of the towels. Might want to consider relocating it. 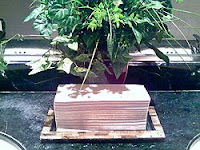 Also, beneath the vanity, is a wicker basket that's there -- I presume -- solely to handle the paper towels used from the vanity. This was a pretty tacky addition and while I assume it was included to add some sophistication to the idea of throwing towels away (the rule is, apparently, that good towels deserve a good waste basket, even though a crappy one does just the same). I didn't buy it, and it just seemed like a foolish add-on. It works for the J.W. Marriott Grand Lakes, because the rest of the bathroom has that same unified vision, but not here, I'm afraid. 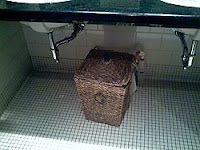 8. A nice face lift to some themes we've seen before. Not perfect, but pretty close.

Nicely maintained. I would just change out those soap dispensers and get rid of the fake plant and wicker waste basket, since all of it feels out of place here.
at 14:59