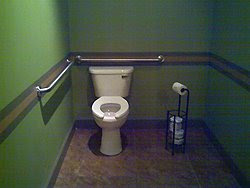 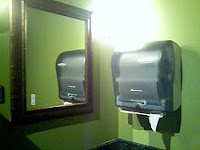 This is a simple rectangular storefront, so finding the bathrooms is easy. From the front entrance, wrap around the privacy wall separating the entrance from the dining room (it's a sort of water wall -- kind of neat, I thought). Turn into the dining room, which will sprawl out to your right. A sushi bar will be on your left.

Head to the back of the place, towards a hallway there which leads to the kitchen. At the mouth of the hallway, turn right and you'll see the toilets. 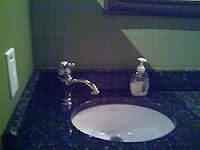 This upscale neighborhood sushi house surprises on several levels. For one, the place's sophisticated design, filled with woods and dark colors, makes it feel exclusive, but the friendly, attentive service and warm vibe break down that sense of exclusivity and make it very approachable, even homey. Much of that effect is due to the the people working here, who are some of the friendliest you'll find in any sushi restaurant in town.

The food is good too. It's not my pick for best sushi in Orlando (that honor goes to Rangetsu, I'm afraid), but it's definitely better than a majority of the neighborhood sushi spots that have popped up around town over the last few years and it's definitely worth a stop if you're in the neighborhood. It's just fun hanging out here. The rolls are imaginatively prepared and fresh tasting, and the rest of the menu offers a slew of other dishes, including traditional Korean and Japanese dishes. The bulgogi dinner is a standout, as is the pork and ginger stir fry. 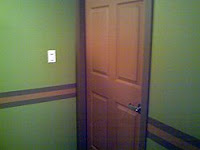 The toilets extend the stylish decor of the dining room, albeit with a slightly more homespun bent to them. The walls here are lime green with a blue and rust highlight along the center. The floors are covered in rust-colored linoleum. A light brown door closes you off from the restaurant and proved reminiscent of the door used at Anmol, in how it serves as an effective, even iconic, separator from the restaurant and offer top-notched privacy.

It's a spacious area, long and narrow, but not too narrow. A very room one-bagger, really -- even bigger than the larger facilities at Phil's Cheesesteaks, Strollo's Cucina Due, and Pizoodles in Vero Beach, though it's also considerably more sparse in decor than those places.

Of course, sparseness is nothing new in terms of sushi restaurant toilets -- Sensi and Okada in Las Vegas have elevated the design of such places to an art form, i think. (Though it should be said that a few sushi places we've visited have gone the opposite route, making their toilets lively and decorative, like Mr. K's Chinese Cuisine, Shiki on the Beach, and Oishi.) However, there is a certain elemental set up to this place that makes it fall short of those Vegas locales. And clearly those places have a greater budget, which is evident as well. 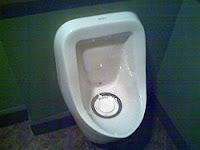 As a result, the place feels a bit too roomy and sparse at times, and perhaps a little dim as well, especially if you're sitting alone atop that white porcelain throne, which sits alone in the very back of the place. But it could be worse -- that's for sure.

On the plus side, the designers have aimed for something better than the sum of the parts here. These toilets aim for high billing and that' s evident here. The vanity -- a single sink set into a short marble counter and placed before an elegant wood-framed mirror -- is a nice touch. As is the toilet paper stand, which adds a lot of class that a built in holder wouldn't do -- a similar effect to what's achieved at American Signature Furniture South Orlando. Simple add-ons, yes, but their elegance is definitely noticed in a place that's as sparsely decorated as this, and thus they make the minimalistic approach work for them instead of having it run their design. 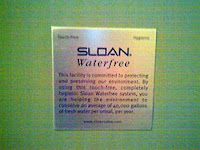 Even more impressive are the environmental touches embedded here. The showstopper is the waterless toilet, which is the first of these I've seen (though a few more have popped up in other places of late). How it works, I'm not sure, but it certainly captivated my attention for a spell and had me reading the certification plaque above it, which explained what it was.

Also, the lighting system (albeit a bit dim) is turned on by sensor, not a switch, which ensures lights are on only when someone is inside. And the paper towel dispenser is automatic. Top that off with the fact that this is one clean place, and you've got a top-notch toilet that aims for greatness, even though it doesn't quite achieve it. 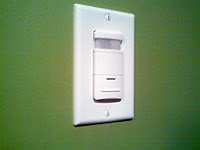 8. I admire the work put into the place, and its excellent maintenance, even if it doesn't quite reach the upper echelons of the sushi restaurant bathroom, like Sensi or Okada.

It's a very idiosyncratic place, and I admire that. Some wall decor might flesh it out a little more, though of course nothing drastic is needed. Also, some brighter lights would be welcome to eliminate some of the shadows. If you had the budget, some marble tiles would definitely be welcome. (Then again, that may make it look too much like Sensi or Okada, and I don't want to compromise the place's identity.... then again, Sensi or Okada were pretty impressive.)
at 15:08