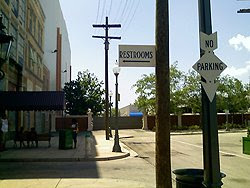 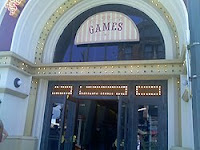 Head to the New York section of the park, an area that has a number of sound stages that, from the outside, look like traditional NYC tenements and skyscrapers but inside house non-NYC-inspired rides like the fun Mummy coaster and special effects-driven Twister.

Once there, look for the area's gaming arcade, which can be found by locating the large sign reading "Games." The gaming arcade is set inside a corner building, with one side facing the main walkway and the other facing an alley.

Instead of going in the arcade's main entrance, which faces the street, go past it and down the alley (you'll see another entrance for the "Games" section here). Beyond that, you'll see a sign for the "Gotham Ice Company" hanging above an archway that looks like an entrance into a sewer system. That's actually the bathrooms. 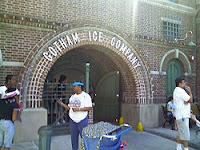 You kind of expect the inside of the bathrooms here to evoke the spirit of NYC, given the amount of effort put into the facades of the New York area buildings themselves. And to some degree, that concept is exhibited well here.

These are large, somewhat sprawling facilities that look and feel very much like the larger toilets experienced in Islands of Adventure. Visitors here will find the urinals set up along one wall, the toilet stalls set up behind them and the sinks arranged in various stations and divided by the walls of the place. 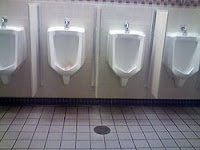 The central area is a bit more spread out than the larger facilities at Islands of Adventure, allowing for more walking room between the toilets and sinks and such. Also, because of that roomy center, the area also feels more bustling than it is. All of which captures a certain spirit of NYC, if you think about it.

However, as you can imagine it's nothing like the real thing -- and don't expect these to be like the impressive Grand Central Station toilets), but as theme park toilets go these do capture a sense of urbanity, which I found commendable. 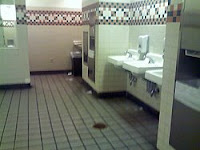 The decor helps achieve this: The tile work here is modest yet decorative: Standard gray tile on the floor, straightforward white tile on much of the walls and a simple black and white tile pattern about three-quarters up -- all of which combined gives it a somewhat old-fashioned turn-of-the-century feel. Think McCormick and Schmick's Orlando or Philadelphia's Davio's, just without the modernist sheen and polish and with much more room.

On the flip side, the place was also somewhat filthy -- not in the open areas but in the smaller zones where you don't look at first but then find yourself unable to look at afterward. While the toilets were pretty clean (though not immaculate), there was lots -- and I mean LOTS -- of water on the floor, and with that came a prominent stink of urine -- so strong that I wondered if half of the pee intended for the toilets had landed on the floor instead. 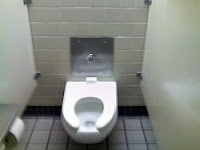 More disturbing were the poofs of white "substance" found beneath the sinks. I must use the word "substance" here because I wasn't sure what this stuff actually was. Was it coagulated soap suds, squished up paper towels, dragged along toilet paper or cleaner that somehow gelled in the nether-spaces of the bathroom? Either way, I stayed away from it, fearing it might spawn in the bathroom and swallow me whole.

Of course, given that -- and the smell -- the place also felt pretty much like an authentic NYC public toilet, wouldn't you say? 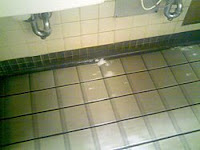 6. Nice design and would have rated higher were it not for the foul odors, mass amounts of spilled water and identifiable white "substance."

I like the place, only it needs stronger air fresheners and clearly needs to be mopped more regularly. I imagine that once the white "substance" issue grows out of hand, venerable cleaning SWAT teams much be sanctioned to tackle the job successfully.
at 14:06