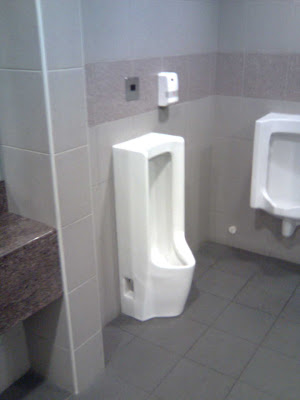 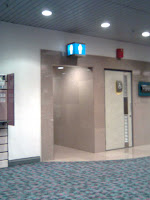 Changi Singapore is a maze of a place. No, that’s not strictly accurate. It’s actually easy to find everything once you realise its scale because the signage is fantastic. However, it is huge and has lots of gadget shops that are really very interesting and, quite frankly, distracted me from the task of finding the next plane.

Add to this that I came to this particular toilet twice (on my first and third pass through this airport on this particular trip) and you’ll get the picture as to why I really don’t have a clue how to direct you there.

However you can use this map (the best map I’ve ever seen of anywhere let alone an airport) http://202.56.134.170/entertainment/interactivemap/main_.htm to find it. It’s in terminal 1 towards gate D40. 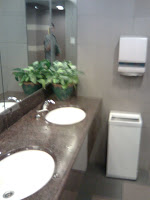 I was looking forward to Singapore. My boss had told me “you could eat your breakfast off the pavement” and that’s the sort of place I like. Clean, tidy and neat. Changi didn’t disappoint and is a fabulous airport. My first stop was after a flight from London on a transfer to Kuala Lumpur. With no desire to eat I used the facilities and wrote the first draft of this blog.

The sinks had great marble surrounds. The toilet cubical was clean and had handy metal shelves to put things on that you don’t find in the UK. But it was the attention to details that went beyond what you normally find in the average airport toilet (which are pretty good these days) that made this place stand out.

I particularly liked the tall urinal. Am I over egging the pudding when I say it’s a piece of sculpture? It’s just fantastic and stately. An old English gentleman of a urinal! 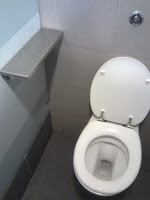 Add to that that there was a working clock that gave accurate time and flowers that at least looked real from a distance and you have a comfortable place to pee.

So why did I have to re write the blog? Reviewing the pictures later in the trip showed that the toilet was just too bright for my camera. Eyal may well be worried about being caught taking photo’s in airports and as he rushes gets blur on his pictures, but I wasn’t rushing. Second time around I just had to try again and put some special effort in to the process. Let the camera settle… and snap.

Well, you’ll see the results weren’t too great. The conclusion had to be that these toilets are the shiniest I have come across. WOW. 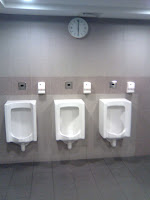