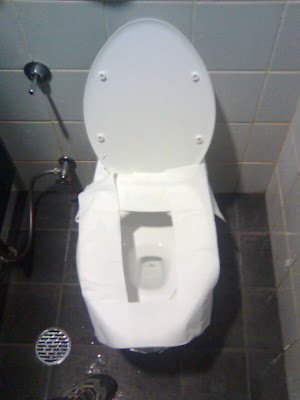 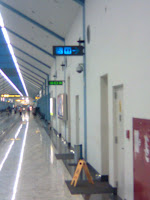 From the central information point the terminal is shaped like a T. Take the leg of the T and the second toilet on your left is where we are.

You know when I booked my flight and there was a stop off in Colombo I thought nothing of it. It’s just one of those places you pay little thought to when you’re making your way to wherever it is you are going and having to make a transfer. I’ve only regretted this lack of thought once before, a flight where I took Aeroflot to Nairobi and found myself unannounced in Northern Cyprus and the Yemen. This was a surprise, especially as both were far from stable at the time. 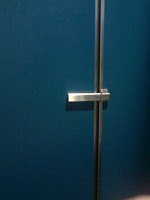 I guess this time I didn’t really have the excuse of not knowing where I was going, but the fact that Sri Lanka is once again in the middle of civil war only came to mind as the plane was landing. Passing the military section of the airport, alongside two gleaming and combat ready jets I saw the scraped out hulks of two aircraft complete with bullet holes. That’s all it took to jog my memory. Still, we do a fair bit of business here and its clear that the Tamil factions only come this far south every once in a while and are no more dangerous than the IRA were in London back in the day. And hey we upped the insurance before I left. 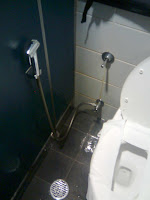 So I guess I was surprised when I got into the terminal building. I really wasn’t expecting it to be so bright. The whole building was absolutely gleaming. A spotless, granite floor stretched in to the distance down the hall. This was a temple for the aeroplane. Whilst not huge – I certainly noticed the arrival of 180 Japanese tourists joining the same flight I was – it inspired confidence. And the staff were some of the friendliest I’ve come across.

And that brings me to the toilets. When I walked in there were two cleaners with a flooded floor. It seems that’s the way the clean toilets here. Flood the floor and sweep the water into the drain at the end. I decided to go to the next toilet along but these cleaners were having nothing of it and insisted that I should wait and they’d get out the way. Frantic activity followed and they cleared the floor, and placed toilet paper on the seat and ushered me in to the cubical. This is extraordinary I thought slightly amused. 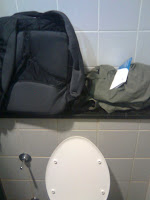 The toilets themselves were spic and span and quite stylish in keeping with the rest of the airport. A shelf that gave plenty of room for bags and coats was availiable. The door was had an elegant slider and as is the norm in asia there was a sprayer that was almost blinding. They were obviously clean as could be, but once the toilet paper was removed you could the see the seat had seem some serious wear and tear. That made me glad that I’d had the service from the cleaners.

So knowing what was likely to come next I went about searching for some cash. No US dollars to be found I hoped some Astralian dollars would have to do. And give these guys credit where it was due they were over the moon. Good on them. 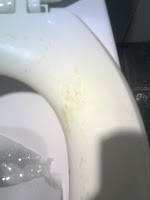 Unexpectedly good. Just get the toilet seat changed.
at 05:30