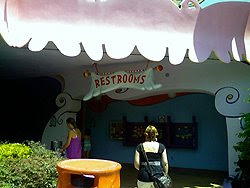 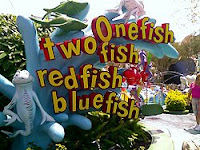 Head into the Seuss Landing section of the park. Once here, look for the One Fish Two Fish Red Fish Blue Fish ride -- essentially just a Dumbo ride. When facing the One Fish Two Fish sign, look to your left and you'll see Circus McGurkus Cafe Stoo-pendous, a cafeteria set inside a circus-tent-designed type of building. 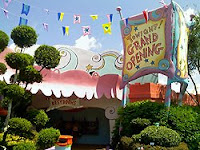 This kiddie-area toilet had me shaking when I neared. After experiencing the near-horrific mess in the park's Toon Lagoon toilets, I could only expect the worst from these facilities. After all, this is a major kiddie area of the park and it's near the park entrance -- two no-no's when it comes to discerning clean toilets.

But it turned out to be surprisingly clean. That alone may have been the biggest surprise during this visit to the park. 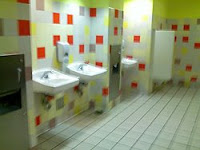 The toilet itself looks very similar to the Spiderman toilets in Super Hero Island, in that they have a base of off-white tile on the wall that is flecked with colorful tile highlights. Only here there are more color highlights than at the Spiderman toilets. (In fact, the toilets look a lot like the ones you'd find at the Sanford Zoo -- which had me wondering if they were put up by the same company. Hmmm....)

Anyway, the setup here is pretty much the same as what you'd find at the other toilets in the park. Only it's flipped. The row of urinals is found on the right wall here, not the left, and the toilets are on the right. The sinks, like with the other park toilets, are set up front inside indentations in the wall -- only the sinks are coupled up in those indentations instead of having indentations to themselves, like they do at the Lost Continent and Jurassic Park toilets. 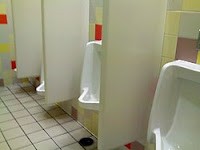 Also the toilets here were much roomier than some of the park's finer facilities -- on par, if not just a little smaller -- than the Hulk Coaster toilets. They were also the busiest toilets I experienced in the park, and the fact that they were clean and mostly odor free made them all the more impressive in my book.

Not outstanding, mind you -- certainly these aren't the toilets you want to hit if you're looking for some privacy and comfort -- but they certainly won't scare you off like the ones in Toon Lagoon. 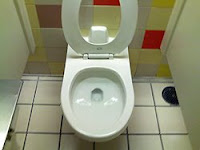 Sure, I found some some water and mis-thrown towels, but at least it looked like an orderly mess. That, I think, deserves some accolades. 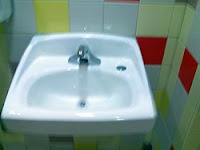 I see this place being policed heavily by the cleaning crew -- and that seems to be working because it was definitely worth a stop. So keep up the good work.
at 14:07