Islands of Adventure: Toon Lagoon Toilets Are Worst in the Park 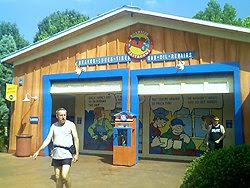 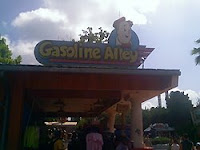 Walk through Toon Lagoon and look for Gasoline Alley, a small souvenir store set amid the creative set design found there that looks like a gas station convenience store from the outside and sells various cartoon-based souvenirs instead of standard gas station stuff.

Just past Gasoline Alley is a faux garage -- really, it looks like a cartoon service garage. Those are the bathrooms. 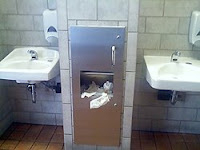 I admired the look of the outside of the bathrooms here more than what I found inside. Outside, the garage design is clever. Inside, you'll find a somewhat tiny environment that's both crammed, stuffy, smelly and messy.

As stated in my review of the bathrooms across from the Hulk Coaster, the normal rule of thumb for theme park toilets is that the further you are from the higher traffic areas, the cleaner the toilets.

These toilets prove that theory wrong. These were the messiest and more disgusting toilets I visited in the park, and they were a little off the beaten path and did not have much foot traffic around them. 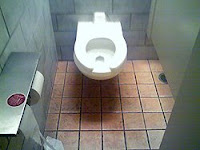 So perhaps the theory should be amended: Any toilet where small children are the main populace will lead you to the worst toilets -- and the attractions and rides in the park's Toon Lagoon area cater mostly to children.

Also worsening things is the fact that the park's two big-name water rides, the Dudley Doo Right flume and the Popeye river rapids, are in this area, meaning that children over the height minimum will come to these bathrooms after they are soaked in the park's stinky ride water and relieve themselves, making these toilets an algae breeding ground of theme park proportions. And that's really what this place smells like. 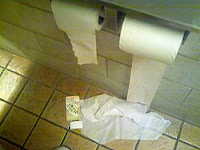 Amenities-wise, the toilets here are about one third the size of the ones experienced in Super Hero Island. White toilets, urinals and sinks. Four urinals along the back wall, with three stalls across from it, a sink station up front, a baby changing station and a big mirror. The feel of the bathroom is decidedly cave-like for such a small space. Not much privacy, even if you're alone here because the small space echoes the noises heard outside a bit too well.

The walls are covered in a classy gray/off-white tile, the floor in that standard red brick tile I've seen at places like Hershey's Ice Cream Vista Lakes. It's definitely homey, to a certain degree, in here. 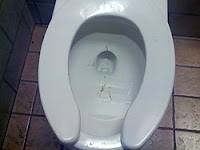 But what a mess. The floor was covered with paper and water, and the stalls were filled with unrolled toilet paper and water -- so much so that I felt like I was wading through a one-inch-deep cesspool. The toilet had some poop streaks inside as well. Just gross. And the smell..... Think algae breeding ground mixed with pee......

3. A nice bathroom from the outside, and structurally, but a disaster zone in terms of cleanliness and smell.

You definitely need to send the cleaning crew over more here. This place needs constant attention. As is, it looks like the children visiting it are setting the cleaning schedule for it.
at 13:00