Islands of Adventure: Super Hero Island Toilets Just So So 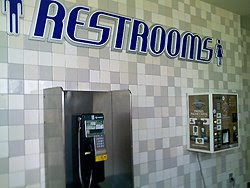 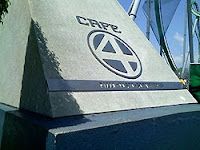 After entering the park, follow the masses to the Incredible Hulk Coaster, one of the park's main draws. Once there, look across the street from it for the Cafe 4 restaurant, named after the Fantastic Four superheroes. (It's just a fast food restaurant, nothing more.)

Approach the entrance to Cafe 4 and then before heading in look immediately to your left. The restrooms will be there -- hard to miss because the word "RESTROOMS" is cast over the entrance wall to the facilities in a font looking a lot like comic book writing. 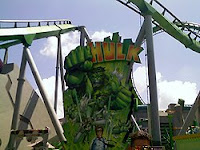 The rule of thumb for most theme park bathrooms is that the further you are from people, the cleaner and more enjoyable the bathroom experience.

Given that this bathroom is located across from one of the park's biggest attractions (the ferocious Hulk coaster), and that I found the ride itself swarmed with people both looking warily at the ride and gearing up for standing in line for it, and the fact that Cafe 4 is the first proper eatery you come across while in the park (there are stands and such in the main greeting area, but nothing to sit down and enjoy a meal at), I prepared myself for the worst here. Lots of people + scary ride=Messy toilet. Thus, I expected this toilet to be truly horrid, smelly, filthy, even vomit strewn. 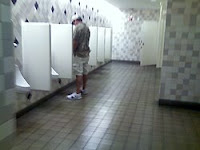 However, that wasn't the case. I was pleasantly surprised by what I found here. While it wasn't the cleanest toilet I experienced inside the park (that would be the one in the Lost Continent) I was amazed to find that the toilets here were clean, spacious and a cut above the functional base.

These are sprawling facilities, with a row of about 10 or so urinals fixed into one wall and a string of about eight toilet stalls opposite it. A stretch of sink stations is found in the front, with paper towel and soap dispensers fixed between them. A baby-changing station is in the front, opposite a large stretch mirror, which is the only mirror in the place. (Clearly, people don't want to see how horrified they look after getting off the Hulk ride, eh?) 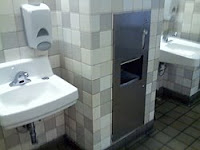 The fixtures themselves are nothing special: White porcelain toilets, sinks and urinals. The walls are covered with a friendly gray and white tile pattern and the floors have a standard mattered gray tile on them (like what you see at several places). There are no decorations on the walls, just the tile work.

In all, a pretty straightforward and clean bathroom, well-maintained and inviting. A bit airport-like in feel, but with a bit of a friendlier facade. Then again, what more do you want from the place, seeing that thousands of people visit the facilities each week? 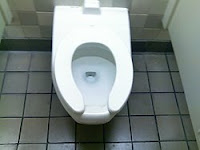 One oddity to note: The urinals all had little target stickers in them, the stickers themselves being about the size of a nickle. Not sure what they were there for (didn't want to get too close, since they're in urinals) but still I took note. Is that to help children with target practice?

6. A decent, functional mass market toilet. A bit sterile but then that's kind of expect, given the volume the place does. 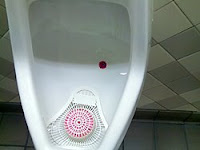 Not much to say here. If anything, I would say that the biggest complaint is that the place lacks the creative design found in the area outside, and you kind of expect a little more flash inside here. (Heck, if Vegas hotels can do it, why not here?)

But then again, seeing that this is the first bathroom people cross when they come inside (outside of the one by the ticket booth, which was too much of a madhouse to review), and that it's beside a major attraction, it could have been much worse. So in a way, I must give kudos to that as well.
at 14:57