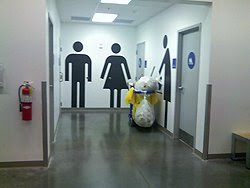 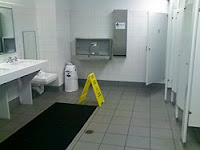 Easy to find. Just enter the store through the main entrance and the bathroom will be located behind the central display found there. If you can't find it, just head towards the escalator and wrap around the display (it blocks the view of the entrance to the the bathrooms) and then look for hallway with large man and woman icons painted on its walls -- the toilets are there.

Pretty hard to miss really -- and a great location for people who find themselves in dire need of facilities before entering the store.

Note: There's another toilet behind the food court -- also detectable by the large man and woman icons painted on the walls nearby to it. It offers the same setup as the one by the front entrance, only it's half the size. This was not reviewed for this article. 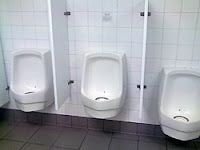 Want to furnish your house on the cheap? Then this mammoth complex (the store itself is rumored to be more than 300,000 square feet in size) is for you. Inside, you'll find just about everything you could ever want in terms of furniture and housewares, from couches, beds and mattresses to storage bins, kitchen utensils and cookware -- there's even a food area offering an assortment of Swedish (the company is based in Sweden) goods, from herring to jams to frozen fish. No kidding. 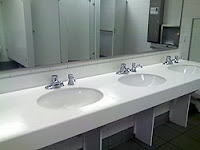 And most of the stuff is cheap and needs to be assembled. Which of course makes it cheaper to buy. A new desk with a hutch, for example, costs only $200 -- a real bargain! A pound of coffee is $3.50! Woohoo! USA! USA!

Of course, the quality of the items is kind of hit or miss -- the lower-priced furniture is mostly of the particle-board variety. But it's functional enough, at least for the short term. And essentially anyone with about $1000 can fully furnish their apartments with the items found here, which makes it great for people starting out and trying to create a home for themselves in these woeful economic times in America. 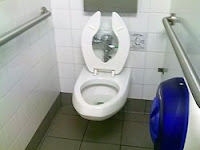 The store interior is complex and labyrinthine to a fault. Visitors don't so much stroll through but follow a guided map that takes them through various showrooms, all of which display nearly every item available in the company's monstrously large catalog. There is even a recommended walk path through the store (shown on a map found every 50 feet or so) -- and the layout is so complex and maze-like and calculated that if you stray from that path you end up walking in circles (or at least it feels that way to some degree) for a while. 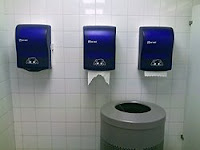 Of course, having said that, I must admit that this set up is decidedly ingenious, as it essentially guides you perfectly through the store and dictates how you will experience your time here. Is it a coincidence that the store's cafe (which offers cheap but delicious dishes of Swedish meatballs, gravad lax, pasta and more) is located halfway through your trip -- or that the food area is the last thing there (impulse buy, no?)? Or that the "shortcuts" leading you to the cashiers take you past some of the store's more show-stopping set displays (like the mock apartments furnished solely with IKEA items)? I don't think so. 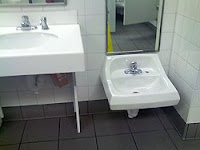 The bathrooms are equally calculated and clever, but they are also a bit over-complicated in design as they offer too many options for visitors -- and because of that they become a bit confusing and badly setup. But if nothing else, you can't say these toilets are boring!

This is a large place, with four stalls (including two handicapped stalls: one in the front, across from the entrance door, and one in the back corner) and three urinals, as well as a large vanity area with about five sink stations in it. 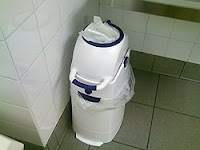 The walls here are covered in white tile and the floor is covered in gray tile -- very similar, I found, to the toilets I experienced in Sam's Club Orlando and Melbourne, only with a smaller tile pattern. It's a place that feels very sterile and clinical at first -- and that feeling is extended thanks to the flat fluorescent lighting coming down from overhead.

The white porcelain urinals are all waterless -- similar to the ones seen in Nona Sushi and Whole Foods South Orlando. The commodes themselves are standard white porcelain models but but have a European-minded flush system attached to them -- pull up on the flush lever if you're doing a #1 and push down for a #2 (which thus limits the amount of water needed to flush said amount of waste). Directions are stuck to the wall beside the flush rods, in case you're confused over which direction to go with. 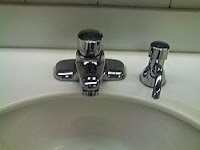 Toilet paper holders inside the stalls are white plastic with clear blue plastic lids -- also very clinical in appearance but slick in a modernist way. But that blue highlight color is found in other areas of the bathroom as well, most notably in the paper towel dispensers, which hang stoically at the far end of the bathroom, next to the front stall and entrance/exit door.

Also, the far back area of the vanity is devoted to kids and parents. There's a small sink located there, set at about half-height to the standard vanity counter height (for children -- which is a nice touch, I thought) as well as a baby changing station against the back wall. To the left of the baby changing station (on the floor) is a small white trashcan for the kids to throw their paper towels into -- and for parents to throw away diapers and such; it has highlights that are the same color blue as those other items mentioned and was stuffed to the gills with diapers and towels on my two visits. 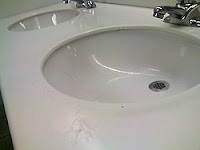 The vanity itself is pretty plain Jane. A standard white marble counter with white porcelain sinks laid into it. What's amusing about it as that the faucets are the old push-down-to-get-water models and here they are set in a way that one push only gets you about two seconds worth of water -- hardly enough to even dampen your hands well. So that means you have to wash your hands one hand at a time so that the flow remains consistent. (The faucets reminded me of the ones I found at the Delta Crown Room in the JFK International terminal -- a fancy place with pretty archaic faucets. What gives? Why can't these self-proclaimed stylish places spring for some quality faucets?) 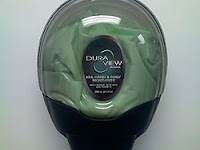 Even more amusing is that the soap dispensers, also fixed into the counter, automatically pump out some delicious foaming suds -- which of course made the crappy faucets all the more out of place.

Another inclusion is a pump of hand cream hanging from one of the stall walls of the front cubicle. It's not great hand cream -- actually, if makes your hands excessively greasy, especially if you've just washed your hands and your hands are still a little damp -- but it's a nice option that's hard to pass over. Of course, seeing that it's fixed on the wall to a toilet stall, I imagine that the person using that stall gets more than his share of interruptions during his visit. Given that, why isn't that pump placed elsewhere, so it doesn't disturb visitors as much? Hmm....

Odor-wise, the place wasn't bad. A slight urine-y but nothing terrible. Cleanliness-wise: I found a fair amount of spilled water (especially on the vanity) and paper on the floor (especially by the kiddie area), but also each time I visited I saw an attendant about to go in and spruce the place up, so it seems that the place does get cleaned regularly.

7. Really a 6, but it's a unique place that tries to do something different, so I'll give it an extra point for that.

The place tries a bit too hard in places (kiddie area, hand cream, etc.) and as a result becomes a bit frenetic in execution. There's so much to do here you wonder if people will stay longer just so they can experience everything (myself included). I like that there's plenty of options, but the placement of some of the items is questionable -- especially the hand cream dispenser attached to the stall door and the cheapo faucets. Seems like if the place simplified just a little, it would achieve some sort of zen quality.
at 15:38