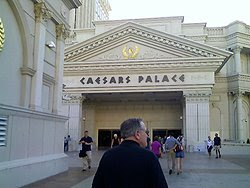 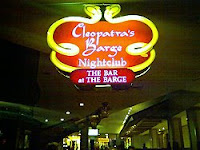 Like many of the other mammoth hotel and casinos on the strip, getting to the bathroom from the street requires some serious footwork. And that feat is all the more daunting at this ginormous hotel because getting to the lobby of the hotel from the Strip itself requires what seems like a half-mile hike. Not easy in the often oppressive Las Vegas heat.

Once inside you still have some distance to go to before reaching this toilet. First, pass through the ornate main lobby (rivaled in spectacle only by the lobby of the Venetian and Wynn down the street, if you ask me) and head towards the casino. On the way, look for Cleopatra's Barge Nightclub, which is a bar that is set on a ship in a large indoor moat. 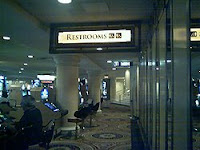 Before reaching the entrance to Cleopatra's, you will see a hallway open up on your left that's on the back end of the slot machine section of the casino. Go down that hallway and you'll spot a sign for the bathrooms hanging from the ceiling.

These bathrooms make a strong first impression. Once you take the turn to go in, you'll enter a small foyer area, pass through a second door and then finally enter the bathroom proper. Quite an elegant beginning, if you ask me. 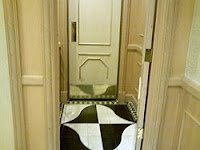 The tile on the floor in the foyer is black and white, but in a wavy, hourglass-like pattern instead of the traditional checkerboard. The walls are beige/off-white and a feature plenty of molding from top to bottom -- to the point where you might think you're entering a cruise ship stateroom or something similar.

Once inside, the decor gets decidedly simpler. Beige tiles (with some black fleck highlights) cover the walls and rather standard wide white tile covers the floor, as does some black tile highlights -- like a wider version of what we saw at Steak n Shake Winter Park, really. 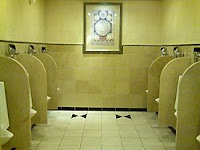 Of course, the elegant woodwork and crown work continues here, although in a more muted way.

The highlight of the bathroom is the ornate vanity, which is enormous and stretching and consists of elegant cabinetry on its lower half, a long black marble counter, about sink or seven white porcelain sink stations fitted in and the same number of individual mirrors hanging over each sink. 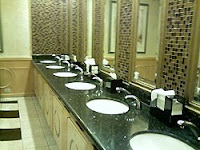 If that weren't enough, some fantastic small tile patches separate each mirror station from the next. It's a very decorative-looking vanity indeed.

Only the automatic faucet and automatic soap dispensers seem out of place -- partly because they are ordinary in appearance and feel like they should be more over the top (like how the Wynn has them, for example) and partly because they are a bit worn down. I know the hotel has done a major renovation of late, so seeing this was a little disappointing -- knowing that little or no money was spent on making the bathrooms completely jaw-dropping, just good enough to make a strong first impression and nothing more. 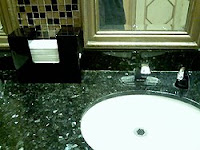 The room itself is roomy, with each section getting an area to itself (a design idea that's similar with the setup of our recent visit to the new 24 Fitness in Orlando). The urinals have a chamber all to themselves, almost like a little cave just for them, and the toilet stalls line the perimeter of the place.

There are about 10 urinals here and about the same number of toilet stalls. The urinal room is reminiscent of the awful ones we found at the Florida Turnpike rest areas at Ft. Drum and Port St. Lucie -- only those were much more disgusting than these by far. 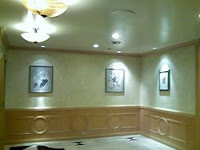 The urinals here are your standard white porcelain models, nothing special, but they are immaculately cleaned and the room itself is tidy and neat and flowery smelling (and cool, thanks to the pumping A/C). Plus, the wallpaper on the upper walls here tries to look like cracked stone -- it's all cracked and crackly -- which is a nice effect (not as neat as the wallpaper in the Luxor bathrooms, mind you, but not bad).

Of course, as we saw in the Venetian toilets, all the nice touches aren't necessarily in order. Like the hole in the wall found there, the wallpaper here is losing its adherence and is pulling away from the wall in spots, particularly around the urinals -- which of course just undermines the effects and makes it look cheaper than it is. 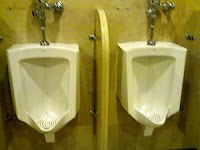 Also, the dividers between the toilets are a bit small and flimsy looking -- and really don't do much to provide much privacy.

The toilets are separated by neat stall doors that make more solid use of the elegant woodwork found elsewhere, though the actual stalls are nothing more than stainless steel. The stalls are roomy though nothing spectacular in terms of size -- good enough, if you will. They are also pretty clean, though one of the ones I popped into has some seriously frayed toilet paper hanging from the roll holders -- as if someone had sprayed them with water and then left them to dry. 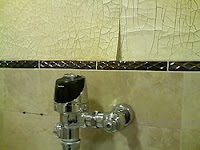 Like the Venetian, the walls hold some nicely framed paintings and prints, mostly of Greek and Romanesque statues (like a picture of Michelangelo's David and such). A pleasant touch to give some elegance to the walls, though nothing spellbinding (and really artwork has to reach the level of what we saw the Mansion on Forsyth Park in Savannah to be spellbinding, I think.)

Also, the place manages to block out the hustle and bustle of the casino floor that's right outside -- you barely hear it once inside. Still the place could actually use more wow, strange as it is to admit. 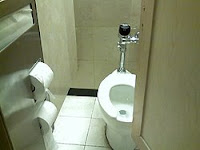 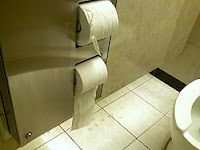 Fix that wallpaper and update those faucets -- and then start working on making these toilets more spellbinding. Will all the renovations that took place here, I expected to walk in on something rivaling the Wynn but in the end got a younger sibling to the Venetian toilets.
at 13:40