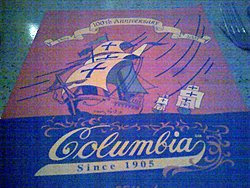 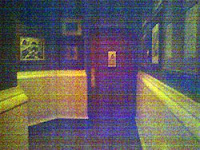 From the front entrance, head through the main doors. Once you do, you'll see a gift shop directly before you, as well as a hostess station. To your left (with your back to the door) is the restaurant's bar area, which has many dark woods and tropical tiles strewn about for decor. To the far left is the main dining room -- a sprawling space reminiscent of 1950s Cuban dining and dance halls, a vast open space packed with elegant white-tablecloth-covered table, wooden walls and low lighting (no dance floor or musician stage though).

In between the gift shop and the dining room is a wood-lined hallway, which in many ways looks like an old-fashioned parlor you might find in a 1950s fine dining restaurant or supper club. Down that hallway is a phone booth (a rarity these days) as well as the entrances to bathrooms, which are near the end of the hallway. 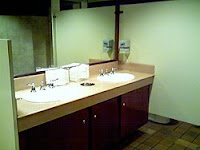 This Florida institution has been serving up some of the Sunshine State's best Latino cuisine (Spanish food by way of Puerto Rico and Cuba, to be more exact) for more than 100 years. The history of the place, whose ownership has remained in the family for four or five generations, is proudly displayed on their menus, and several other places (it's part of the branding, really) and those who have spent more than a couple of years living in Florida know that it's a great place to go for Latino cuisine (especially if you live out of the Miami area). 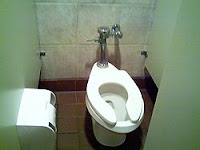 The restaurant itself started in Ybor City in Tampa but has grown significantly in recent years (no doubt thanks to the aggressive gentrification of the state) to include multiple branches in Tampa, as well as locations in St. Petersburg, Sarasota, Clearwater and Celebration, which is the subject of this review.

I've been to the Ybor City location, which has some more ingrained character in the building itself -- things are beautiful there but also a bit antiquated and rusty, giving the place some charm. Here, while the decor is beautiful, it is also a bit too new and polished and representative of the manufactured Americana of the town around it, if you will. Still, if you're in Celebration and are looking for a good meal and don't feel like hitting the fine Celebration Town Tavern, or just want a place that's a little classier than that, then this is the stop for you. 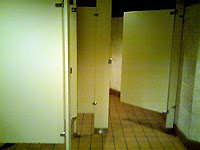 The experience here is decidedly old-fashioned. While on my visit the waitstaff was younger than expected (including several college kids), they still treated us well and professionally. The food was well-prepared and delicious, especially the house specialty of paella, which came in an enormous portion that was packed with seafood and meats. Also delicious was the black bean soup and the red bean and chorizo soup, as well as the house salad, which comes topped in the restaurant's delicious signature dressing. (Though originally they didn't have tapas on the menu, I'm assuming the trendiness of the Spanish-inspired nosh plates are the reason they are added to the menu here.)

Really, it's a great place for a fine meal. Prices are mid-ranged but not too expensive (about $20 per person, which isn't bad considering the quality and experience) and also perfect for a special occasion or elegant night out (though because it's in Celebration, you don't necessarily have to get dolled up to come here). 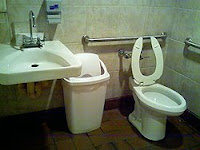 Given the old-fashioned feel of the dining room, I expected the toilet experience here to be similar to what I found at Montparnasse 1900 in Paris, or at least something built off the spirit of McCormick & Schmick's -- a sort of modern interpretation of old-fashioned, if you will. Or even Angelo's on Mulberry, or Philadelphia's Davio's.

But that's not the case. Surprisingly, what I found was closer to TooJay's Deli, in that the restaurant's decor was not at all indicative of what you find in the bathroom. No old-fashioned vibe here, even though everything else in the place leads up to that experience. Instead, here you get your average Teutonic bathroom, nothing more. Bland, bland, bland. What a disappointment. 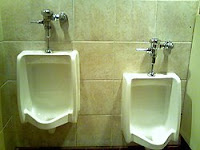 The room itself is hexagonal in shape. Two urinals sit up against the front wall, a two-sink vanity sit on the wall opposite that, and two toilet stalls sit in the corner opposite those elements. There's a wide common area in the middle.

The walls are covered in light beige tiles (similar to what was seen at the Monsoon Restaurant in London, though this is an entirely different experience, or Cavallari Gourmet). The floor is covered in that standard faux-brick tile we've seen at countless other places, like the Kolob Canyon Visitors Center in Utah, or the aforementioned Angelo's on Mulberry.

The walls have no decor on them. The fixtures are all white porcelain. The sink station looks like a larger version of what we saw at the Tamarisk Restaurant. Yawn. 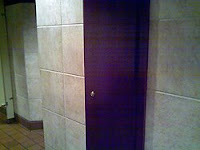 In fact, outside of the fact that the room itself is hexagonal-shaped and there is a small supply closet (behind a dark wood panel built into the front wall), there isn't anything memorable in this bathroom at all. If I stepped in blindly, I doubt I would be able to tell the difference between this place and the aforementioned TooJay's Deli or any of the other dozen or so mid-sized Teutonic bathrooms I've been to since starting this site (like the Big Boy Diner, Jack in the Box, etc.)

Sure, it's clean and odor free and quiet. But after that kind of setup, you expect things to be different here. You think that a place with this kind of local esteem would go that extra mile when designing their bathroom, you know?