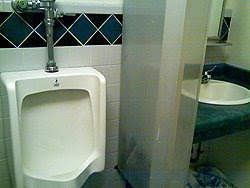 Easy to find. From the front entrance, head inside, towards the dining room. Before entering the dining room, however, you'll see a salad bar on your right. Across from that is a small enclave, where the bathrooms are located. 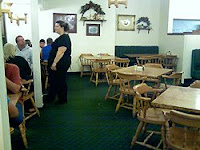 This homey diner, attached to the Best Western in the small town of Green River, is a pretty straightforward little eatery. The menu consists primarily of standard American diner eats -- fried chicken, burgers, etc. -- along with a few trendier (though now standard) dishes, like grilled chicken Caesar salads and such. Nothing mindblowingly original, of course, but the execution is good and the prices fair, so it's certainly a cut above some of the standard roadside fare you might come across. 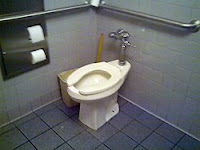 The highlight here, of course, are the melons, grown locally and absolutely tremendous in flavor, juiciness and freshness -- some of the best I've ever had. The town even has an annual festival devoted to it -- called Melon Days -- which draws several tens of thousands in visitors, which (after trying these melons) seems worthy of the attention.

The restaurant's interior looks like a HoJo, which is what it may have been in a previous incarnation: Green motel carpet floor, lots of windows, little decor. Service is friendly and a touch snarky, but efficient and polite. It's clean though not immaculate. A decent road stop if you're in the area, as said earlier. 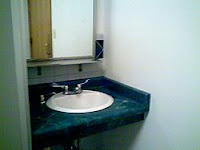 The homey feel extends to the toilets, though perhaps a bit too much. Allow me to explain: This is a small bathroom, similar in size to the Kolob Canyons Visitors Center toilet or the bathroom at the Red Canyon Information Center. Only, the feel here is more like the toilets experienced at the WhyNot Lounge or Steak n Shake Winter Park -- except those places were much cleaner.

You have one stall in the back, one urinal and one sink. The wall behind the sink are covered in off-white drywall with kind of a textured plastic siding cover; the walls in the rest of the place are covered in gray tile with a blue tile highlight strip, and the floors are covered in darker gray tile. 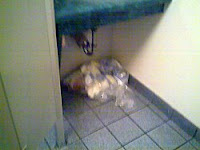 Toilets and sinks are standard white porcelain. The place smelled some of urine and the air was dank. Clearly, some better ventilation is needed.

The vanity is just a blue patterned fiberboard model, single station -- pretty cheap set up and pretty dinged up. A two-part Plexiglas divider separates the urinal from the sink area -- a strange divider indeed, in that 2/3 of the divider is solid gray and the outer 1/3 is transparent. 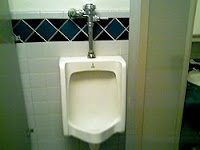 The divider itself is a real work of art -- and I mean that with as much sarcasm as I can muster. Because of the closeness of the urinal and sink, and the way the divider is set, the divider already offers little in terms of privacy. If two people were standing side by side there, each one using his own station, the divider would offer them little space for themselves -- similar to what was seen at the Coffee Cup Cafe in Boulder City, NV. 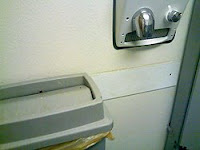 If the transparent part were at the other end, fixed to the wall, then the person at the sink could see nothing (he'd have to crane is head inward to do so) -- that's really the best placement for it, if you think about it. As is, no barrier might just provide as much privacy. Sloppy assembly here.

The rest of the place is put together better but isn't much better, though not as outright noticeable. The toilet stall is roomy (to accommodate both handicap and regular people) but the floors were covered with water and toilet paper. The urinal could use a good scrubbing, as could the stained tile and grout behind it. The sink could do with a good cleaning as well, especially in the corners and against the urinal divider, which (on the sink side) is getting covered with grime and mildew. 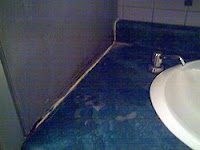 Also worth noting: Below the sink was a bag of trash waiting to be thrown out. Why didn't they just put it with the rest of the garbage? Very strange indeed.

Need to improve the ventilation to remove some of the dank air in here. Also, need to scrub the place over very well -- the tile is starting to funk up in several spots here. Also, take out the trash instead of leaving it beneath the sink. And finally -- fix that urinal divider so it at least looks like it can offer some privacy!
at 14:41