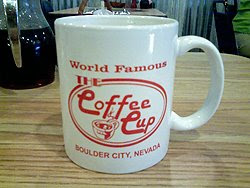 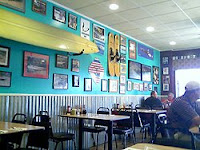 A bit tricky to find. From the main entrance, pass through the dining room and towards the back wall of the place, keeping the dining counter/bar on your left.

Once at the back wall, avoid the temptation of passing through the swinging stainless steel door leading to the kitchen and hang a left, passing behind the dining counter and through a little hallway in the back there, which leads to the the rear of the establishment's secondary dining area. 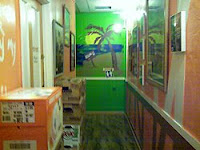 Once through the hallway entrance, take an immediate right and head down a second, longer hallway, which leads to the very back of the place. At the end, look for the words "Banos" painted on the wall, along with an arrow pointing to the left.

Go left, then wrap around a sharp corner and you'll come face to face with the toilets. 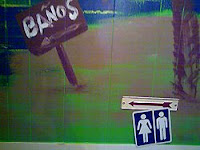 This funky little diner was introduced to me via the Food Network show, Diners, Drive-ins and Dives -- which I don't necessarily find to be a great show but it is certainly harmless and it features enough greasy food to make your mouth salivate and actually want to visit such a place if the opportunity arose.

Well, my opportunity to visit such a place came on this western excursion, as a drive from Vegas to the Hoover Dam one morning passed us through Boulder City and the chance to eat breakfast at this self-proclaimed "world famous" locale. 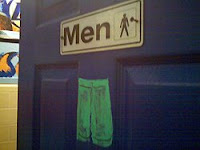 Not really sure what makes it "world famous," though it was pleasant enough for a diner. While it's locked in a comfortable, sub-division-packed town on the shores of the ever-evaporating Lake Powell (about 30 minutes from Vegas proper), the vibe here is decidedly California surfer. The walls are covered with surfer decor, from boards to boating and water skiing photos to paintings of swim trunks (like the ones found on the door to the men's room). 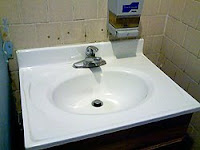 More than anything, the decor of the place reminded me of Hurricane Wings in Orlando -- another land-locked establishment with a heavy beach-goer vibe. Granted, that place has its origins in the seaside town of Ft. Pierce. This place, I'm not so sure about. I guess there's a lot of sea-faring escapades done on Lake Mead, and even Lake Powell, which is about five hours further away by car, but other than that I didn't see much that was actually sea-faring here. Perhaps it's just a hobby of the owners? 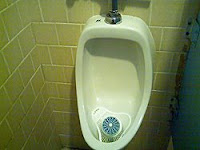 Regardless, the decor is funky and homey enough to enjoy a decent breakfast in. And that's what we did.

We ordered omelets, and while one of my party found the Cali Omelet to be a bit bland (it had tomatoes, mushrooms, spinach, green peppers, olives and onions in it but needed a bit of extra zing, he thought), my Pork Chili Verde Omelet was top notch -- meaty, spicy and enjoyable stick to your ribs fare.

With a name like the "Coffee Cup," you'd think the coffee would be out of this world, however (and I admit I'm a coffee snob) I didn't think the coffee here was anything out of the ordinary -- standard Maxwell House-style cup. Just wanted to mention that as well. Service was friendly, as were the people sitting alongside us. It's very obviously a locals place and on early mornings, before work, and on Sundays, I can see the place being packed with all sorts of characters. I guess that's what drew the attention of the TV show, though honestly I never understand why one diner is better than another as long as the food's good. This one's certainly a major step up food-wise from others I've visited, like Steak 'n' Shake Winter Park and the atrocious Waffle House in Walterboro, SC, but as neighborhood joints go I'm not sure I'd take this one over such favorites of mine, like the Town House Restaurant in Oviedo (on which I would say this one, in terms of food, is on similar ground). 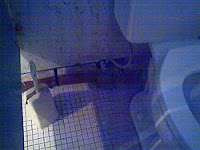 Though as with all neighborhood eateries and diners, that's always debatable, depending on where you live and what you like. For pork chili verde omelets, the Coffee Cup certainly takes top score.

However, when it comes down to bathrooms, I have to give the edge to the Town House Restaurant, my diner favorite back in Florida. Bottom line: While far from perfect, that place's toilets are cleaner and better put together.

The Cup's bathrooms are somewhat worn down, and I think that's part of their charm but it's also to their detriment. The lazy, beach-going vibe seems to have been the creative force behind this place's lack of upkeep and -- no doubt -- purposefully shoddy assembly. 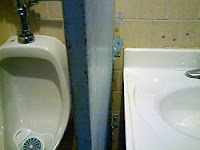 The floor is covered with small white tiles and dark black grout -- almost similar to what was seen at Theo's Kitchen, only not as scary. (I think Theo's has better food, by the way, though this place has a better bathroom -- see how this is all relative and debatable?)

The walls are covered with a number of substances. Beige tile, much of it looking like it's about to fall off the wall because of the age of the grout, hangs behind the urinal and vanity. Painted blue particle board is found along the back walls, and what seems to be white-painted cork board makes up some of the side walls. Makeshift, this is -- though it still feels better put together than the bathroom we experienced a while back at Babys R Us. 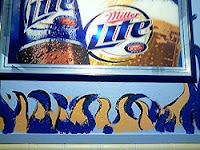 Of course, given the lazy beach-going vibe here and the mass quantities of wood walls, you'll also find plenty of graffiti here as well. And believe me the walls are covered with it.

Some of the more noteworthy examples include the statement "Live Free or Die" written just below the toilet seat cover dispenser in the one stall found here. Why it was written there? I'm not sure, though in some light I guess you could say the statement offers some encouragement to those who need a little help expelling their pork chili verde omelet. Also, a picture of a propeller plan with a banner reading "Eat at the Cup!" can be found on a the upper door to that stall (inside it, that is) -- clearly to give people some inspiration about trying the pork chili verde omelet after expelling what was already in their gut beforehand.

And I really liked the flaming mounting drawings that started inside the stall and extended onto the back wall, through the stall opening (when the door was opened). Very creative (and I guess it clearly shows how I spent my time while in here, no?) and a pleasing nice unified vision, if you will. 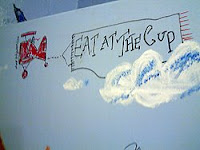 The room itself is small and packs in a lot of elements -- meaning too much -- for the space alotted. Not as tight as Club Quarters Philadelphia or at Petro Palace lobby or the SkyBar in St. Petersburg, Russia, but really, this is a one-bagger that's been jammed with items and because of that it really beckons a simpler layout or full conversion to a one-bagger. If more than two people were in here at the same time, it could get sticky moving around, and forget about privacy.

More than anything, the setup reminded me of the multi-person toilets at the Copper Rocket in Maitland, which are longer than this but pack in the utilities only in the very back of the place, making everyone who enters pool in the back and such. Both are equally uncomfortable in that respect. 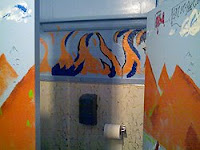 Worse still is that the a lot of the items here seem to be falling apart or coming loose from the walls. The divider between the sink and urinal, for example, waves back and forth freely if you move it some -- that's how loose it is. (Makes the hole in the wall at the Venetian lobby toilet look like a minor blemish, really.) The toilet stall walls are in a similar state of disrepair, though they seem a bit more sturdy.

The urinal and vanity are kind of wedged together in the front of the bathroom, with the corners of the room pressing in around them some. The commodes and urinal are your standard white porcelain models, all in various states of wear and tear. The vanity itself isn't much more than a cheap cabinet and white porcelain sink set on the floor -- cheap and functional, nothing more, like something you'd find at a flea market, install and forget about (reminiscent of the vanity at Country Ham 'n' Eggs, only without the fake wood walls and Grandma's house feel).

There was also a bit of urine stink in the air, though nothing as bad as some other places I've been to (I'm looking at you, horrid CVS Pharmacy bathroom in Savannah, GA -- pew!).

A funky place, yes, though also a bit frightening from a bathroom perspective. Would return for the chili verde omelet, though.

6. Really a 5, but the funky graffiti and the pork chili verde omelet raise the score some.

Lots to be updated here, if you think about it. Decor-wise, you're doing great. But the tile needs replacement, the barriers need to be better secured, some of the fixtures need replacement and the smell needs to be freshened. Ultimately, the place would probably work best as a one-bagger. If you can do that, and still keep the homespun surfer decor, then you've really accomplished something.
at 14:11