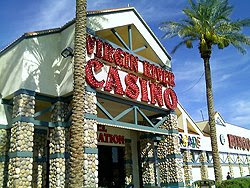 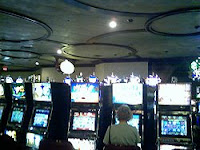 From the main casino entrance, head into the building and towards the buffet, following the signs to get there as the layout is a big confusing and you may get lost otherwise.

Once you reach the buffet entrance, turn around, keeping the buffet entrance to your back, and look across and slightly to the left of the slot machine area in front of you. At about the 10 or 11 o'clock position, you'll see a sign hanging from the ceiling, reading "Restrooms." 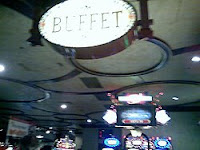 This casino and hotel is located in the ever-growing Mesquite, NV, which was just a two casino town when I first passed through it some years ago and is now a decently sized small community with a feel that's both homey, new and Vegas-like.

This casino is definitely smaller than what you'd find on the famous Strip, and it's not quite as flashy or filled with attention getting signs and sights, but in all honesty it's not that far from those places either. There are high-end shows here -- Kenny Rogers was coming soon, I believe -- and both a decent buffet and a few other eateries inside, and the casino itself has that same odd-patterned carpet on the floor, the same confusing floor plan, the same decorative molding on the walls and the same array of loud noises from slots and people playing table games. Only difference is that it's more affordable and smaller in scale, which for many -- myself included -- isn't a bad thing. 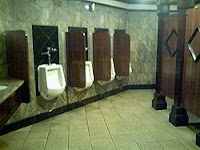 The bathrooms follow that concept and in many ways they are on par -- at least design-wise -- with what we saw at the Venetian lobby. I was actually expecting much worse from here and was pleasantly surprised by what I was.

This is a wide room that packs in lots of features. The back wall houses about five or six toilet stalls. The front wall feature a five-station vanity and, to the right of that, along a diagonal far wall are four or five urinals. That doesn't leave much room for maneuvering in a full house but it could be worse. The urinals and toilets are both white porcelain models, but because the rest of the room is made up of dark colors, they form a pleasant contrast to the eye (similar to what's done at Sensi, for example, only not as extreme and zen-like). Off-white marble tile covers the floors, a wavy blue-and-grey-patterned marble tile covers the walls. 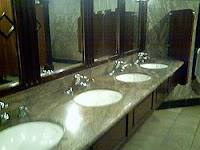 Most impressive here are the stall doors and urinal dividers, which are made of heavy-grain dark wood which is stained elegantly and features simply yet noble carving designs on them.

Just as impressive is the vanity, which is made up of a marble counter with in-laid porcelain sinks. Standard chrome faucets and soap dispensers are fixed atop the sinks themselves. A dark-wood-framed multi-panel mirror stretches over the back of the vanity.

On the whole, it's much more than what you'd expect from a place this far removed from the Strip. For that, and for the extra steps taken to make the place seem elegant, regal and comfortable, I give it pretty high marks. 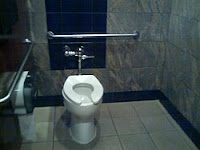 Unfortunately, there was a strong odor of urine here and some of the dividers and stalls needed a touch of repair around the hinges, which were starting to look loose instead of strong. Of course, as with the Venetian toilets, these weren't outright noticeable issues; they were only discernible upon closer inspection. Otherwise, the place was pretty clean and looked well-kept.

8. Almost a 9, were it not for the smell and the bits of disrepair.

It's no Wynn, but other than that, it's pretty close, if not on par with a Strip-based casino bathroom. For that you should be commended. Just eliminate the smell and tidy up the loose ends and you'll have a true contender here.
at 14:25