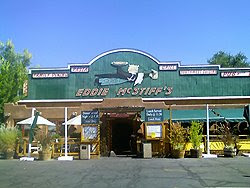 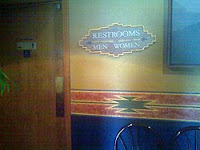 There are two options for bathrooms at this saloon/beer house/entertainment complex.

For the first, head inside the building through the main entrance (which is to the left of the front patio dining area -- there is also a side patio dining area, which begins at the far end of the front patio), past the hostess station, gift shop (which is just past the hostess station on your left, in a little cubby there), and designated "beer drinking area" (which features pub tables and seems to be set up to cater to older clientele who don't have kids with them). At the end of that hallway stretch, you'll see an enclave housing the men's and women's restrooms. 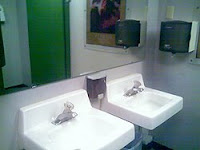 For the second, enter the same way, but just before you reach the "beer drinking area" turn right into the main bar section, walk past the bar (which will be on your left) and booths there (on your right), towards the far right edge of the place. After the booths end, you'll see a hallway open to your right, which takes you to the side patio dining area, as well as the front part of the indoor dining room). Pass that hallway -- the next door on your right will be the men's room, with the women's room being just a little further on that stretch.

Alternately, for the second bathroom, you can cross through the outdoor patio areas and turn inside, turning right at the main drag. 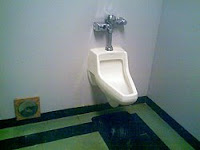 This mammoth bar and beer palace is located in the dead center of majestic Moab. It's an all-encompassing sort of establishment. It's a sports bar housing a festive, somewhat rambunctious attitude and plenty of plasma screens on the TV. It's a microbrewery beer hall that produces its own array of specialty brews which draw inspiration from the rocky, red-sanded landscape around it. It's a two-story saloon containing an assortment of gaming areas (with pool tables and other parlor games). It's an eatery serving up decent pub grub with a regional twist. And, on weekends, it's a venue for local music and other entertainers. 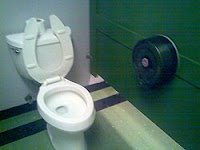 The interior has a bit of a Western feel, mixed with that of a sports bar and a TexMex restaurant. The dining room and bar are dimly lit. The walls and booths are wooden, the highlights TexMex, and the vibe sports bar. Definitely a fun place -- kind of a spin on the wonderful The Flying Saucer in Raleigh, only without the kitschy plates hanging on the walls and the college-aged clientele (or the mammoth beer selection). While here, you instantly know that this is a popular place with both visitors and locals alike, and you can imagine the place gets pretty crazy at times. There's an underbelly here, if you know what I mean, and you admire it for that. 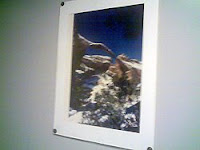 The menu isn't extensive or wildly original, but the food here is tasty and well-priced. The burgers can be all beef or all buffalo (or fish), for example, and can be topped with an array of items that range from traditional Southwestern ingredients (roasted chili, salsa, etc.) to Italian (dressing a sandwich like eggplant Parmesan, for example). There are also an assortment of salads and major entrees (steak, fish, chicken, BBQ, pizza) -- all of which is well-prepared, fresh-tasting and delicious.

The beers are well-crafted and indicative of the regional brew style -- which is that they tend to do in the Western U.S. These are full-bodied brews, usually with a heavy emphasis on hops, that draw on German brewing standards and traditions, but often include original spins on such traditions. As a result, the brews are both very quaffable and complex -- the best of both worlds, really. The establishment is definitely worth a stop or two if you're in Moab -- even if you're just passing through. 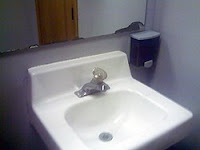 The bathrooms here are of the typical saloon style -- reminiscent to the toilet at The Flying Saucer in Raleigh, just smaller and with considerably less sticky floors.

The two bathrooms here are pretty similar in setup here -- essentially over-sized one-baggers that have been designed to accommodate two or three people at a time. Each one has a single stall, one urinal and a sink (the green has two sinks actually). One has a green trim design, the other a red. The green bathroom (the one nearer to the gift shop and "beer drinking area") is roomier than the red one (which is at the far end of the bar booths), but otherwise they are more or less interchangeable in terms of offerings -- though they are not equal in terms of cleanliness and overall experience. 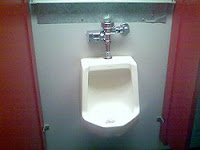 The green bathroom has a linoleum floor with a green and black pattern on it and gray drywall walls. The walls are pretty bare, save or a single picture of some nearby rock formations. The stall (with green divider walls) is very roomy -- a little too much so, like the one seen at the Kolob Canyons Visitors Center -- and so is the urinal area, which could easily fit two more urinals into that big space if someone wanted to put them in there. The fact that the urinal is one of those old single-unit trough-style ones, without divider, makes the room around it appear even larger. 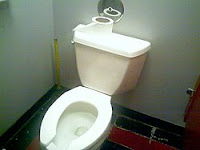 Otherwise, it's a pretty bare bones environment, nothing flashy. Clean, though the air is tinged some with urine (it's a bar after all) and there was some water spillage and paper on the floor, but nothing horrendous.

The red bathroom is smaller and actually feels like a better-spaced version of the bathroom experienced at the Tamarisk Restaurant in Green River, UT. Same offerings here, but it doesn't feel as overstuffed as that one. As with the green bathroom, the floor is covered in linoleum here, this time in a red and black pattern. The divider walls are red here. 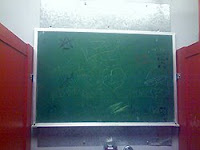 The urinal is in the center of the room and has a roomy chamber around it (courtesy of red dividers, part of which is a stall wall and part of which separates the urinal from the sink -- only one here). The walls are the same grey drywall here, and there is no art on the walls, except that there is a chalkboard hanging above the urinal, which lists some upcoming events and general graffiti. The stall is roomy enough but not nearly as large as the one in the green toilet.

Again the air here was tinged with the smell of urine and I found some spilled water and paper bits on the floor, and the grout behind the toilet in the stall looked pretty worn and grimed over -- definitely the less clean of the two bathroom choices available here. 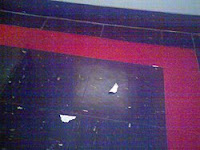 Also, the exhaust fan here was very noisy -- so much so that it became invasive during my visit. The minute I finished my business and went out into the music-filled dining room, I felt like I'd stepped into a sanctuary. Yes, it's that rumbling and noisy.

Though neither option is stellar, if offered a choice, go for the green bathroom here over the red.

6 for the green bathroom. 5 for the red.

As stated, both are pretty bare bones bathrooms, and because of the festive attitude of the rest of the place, it couldn't hurt to add some beer hall decor to the walls, just to make it fun. You don't necessarily have to go overboard, of course, but at least have some fun with it -- like the people at the Pig and Whistle Pub in Sebastian, FL did. Otherwise, please try your best to keep both bathrooms a bit cleaner and odor-free -- and if possible, do something about fan noise in the red restroom.
at 16:25