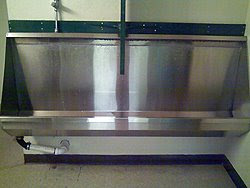 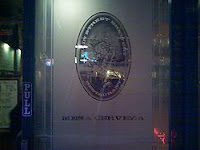 A bit of a trek, since the place is pretty long compared to its width.

From the front entrance, head straight through the bar area, to the very back of the place. Once there, you'll see the in-house brewing facility, in a small room on your right. (There are windows to the room, allowing you to peer inside and view the brewing process in action.) 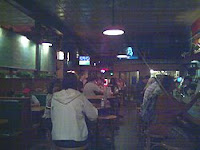 Keep going back once your at the brewery room. About halfway down, you'll see a section of the dining room that caters exclusively to large parties -- it will be on your left. Beyond that is a hallway snaking back and to the right, and a set of stairs leading downstairs, to a game room.

Avoid the temptation of going downstairs, to the game room, and instead take the hallway snaking off to the right. At the back wall, the hallway will turn left and then make an immediate right.

Once there, and you'll find yourself in a small enclave containing the bathrooms. 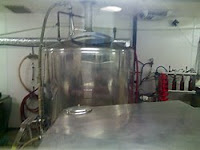 This classy brewpub is located in the heart of the small American West town of Cortez, CO -- which is just minutes away from the wonderful Mesa Verde National Park. In many ways, the establishment itself is similar to Eddie McStiff's in Moab, in that it serves both as a restaurant, bar, pub and entertainment area (the downstairs has an assortment of parlor games and such) to the surroundings, making it a great place to while away a slow evening while in this beautiful country.

The decor here is that of an upscale brewpub -- reminiscent of the Abbey in Deland, only much larger and a bit more rough and tumble in spirit. The walls are brick and covered with chic beer-related art (including labels for their beer varietals) and various hip drawings, including a nifty spin on the regional Kokopelli icon, in which the creature is drinking from a mug of beer. A semi-open kitchen sits in the back, and the dining room is a mix of long wooden booths and cafe-styled tables. 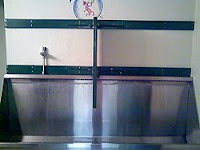 The bar looks more like a traditional sports bar, just with darker woods and fewer TVs -- kind of like a corral of pub tables, dark woods and stools, if you will. And in the front corner is a small gift shop, where you can buy beer and T-shirts and stuff.

Because of the large space it occupies, the place can get a bit loud, especially on a Friday or Saturday night, when the spot is full of locals and tourists alike. Service is good but can be slow during busy times. Prices are fair. 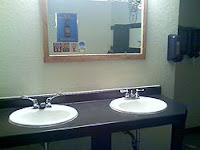 The food is good and at times surprisingly adventurous, definitely a step above standard pub grub. The sausage sampler includes three large links, all made in house, of bratwurst, andouille and smoked sausage, respectively; the andouille was the favorite, one of the best I've had outside of a Cajun place. The regional trout was also a highlight, though it might have been easier to eat had it been prepared flat and open instead of folded and closed. The appetizer of marinated short ribs was sizable and the rib strips were flavorful and pleasantly chewy, though one member of my party found them too chewy and expected them to be more tender. 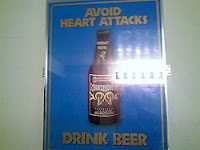 Being a brewpub, you should definitely give one or more of the dozen or so beers on tap (brewed in house, of course) a whirl, as they are for the most part tasty regional takes on classic German-based brews (and each one has a funny name attached to it, of course). The double bock is strong, full-bodied and sweet, so as to balance out the high gravity nature of the brew. The pilsner is very drinkable though lacks that crisp bitterness commonly associated with the use of traditional saaz hops in the beer style. The wheat beers are light, summery and sweet, but not cloyingly so. Well worth trying. 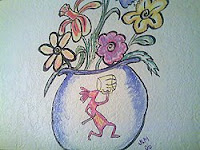 The bathrooms are a bit of a throwback to the traditional English pub, though with some obvious modern flair. The floor and walls here are simple enough -- gray linoleum on the floor, white drywall on the walls. The space is wide, roomy and very clean. The walls have some brewery-based posters (including a funny beer bottle one which says, "Avoid headaches, drink beer" -- which is apparently the business' slogan) and some drawings of Kokopelli himself, slinging back a mug of brew. 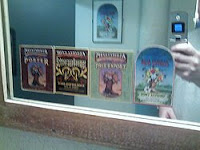 The sink station contains two sinks and a large mirror above them that doesn't quite span the length of the vanity but has stickers of the breweries titles on it. Sinks are of the traditional two-faucet variety and white porcelain, as is the bathroom's lone toilet, which comes in a huge stall that caters both to handicap and regular persons. A very large stall indeed -- on par with the sizes of the stalls experienced at the Kolob Canyon Visitors Center and the green bathroom at Eddie McStiff's. 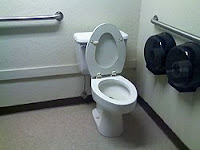 Ironically, the stall doesn't take up all the back of the bathroom, leaving a surprisingly large amount of common area space. Not so much that it produces echoes, but still more than you'd expect. This makes the room a bit of an anomaly, because in most cases most places don't waste much space in their bathroom. Here, you've got tons of room to spare -- easily enough for another stall or trough-style urinal.

Speaking of, the highlight here is definitely the trough-style urinal, which reminded me of the English pubs I've visited -- like Fox Inn in Great Barrington in Oxfordshire. In fact, the make and model of the urinal here and the one at the Fox Inn seem to be the same, only that this one is sparkling clean and new and that one is worn down, rusted and covered in water stains (and most likely other sorts of stains too). Definitely a nice touch to the place and adds to the street cred of the restaurant/brewery. 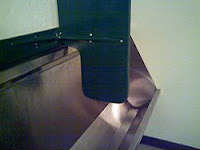 Unfortunately, the green plastic privacy divider placed on the trough urinal is one of the most useless urinal dividers I've seen since visiting the Tamarisk Restaurant in Green River, UT. It's not quite as bad as that one: The Tamarisk one actually tried to offer privacy and in the process (and in poor assembly) offered none. This one doesn't even try to mask the fact that it offers any privacy at all; it's just there and I'm not sure why.

To explain: The divider here is short and set up in a way that it hides nothing from the person next to you. In fact, because it's mounted way up on the trough, the only way to actually get some privacy from it would be if both neighboring parties jump up on the lip of the trough to pee -- and even that might not do much because both parties would have to be 3 feet tall or less to make use of it, given that the divider is pretty short to begin with. Take the thing down, please, since it does nothing.

8. A classy bathroom that's very clean and somewhat funky, thanks to the urinal trough.

I wouldn't mind seeing some more decor on the walls. Also, either get rid of the urinal divider or, if you're keen on keeping git, at least set it up so that it actually offers some privacy -- and seeing that it's in the middle of the trough, you may want to add two more to the sides to ensure privacy from all sides. Then again, you lose the ambiance of the trough -- so perhaps the best bet here is to indeed get rid of it. Sorry.
at 19:12