Outhouse #10: Four Corners Port-O-Let No Different Than Other Port-O-Lets (Including Those at Expensive Wedding Banquets) 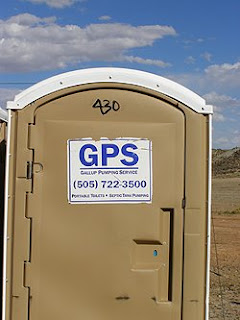 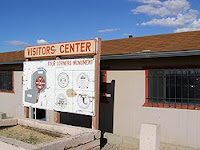 Pretty easy to find. Just look for the Visitors Center. To the right of that is a stand for Navajo Fry Bread.

Walk between the Visitors Center Building and Fry Bread stand and you'll find a row of port-o-potties. (In fact, a circle of port-o-potties surround all the stands here.) Look for #430 and you've found the one I visited. Woohoo! 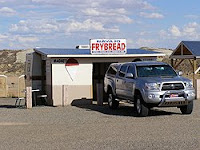 Four Corners National Monument has a sort of mythic standing in my life, as it seems to be one of the few places many people who have traveled across the U.S. have been, and of it they always say the same thing: "Eh, it's kind of a let down."

After visiting finally, I now understand what they mean by that statement.

What the monument itself is is just a point in U.S. geography, and when you visit you see a small cross hair marking indicating where Colorado, Utah, New Mexico and Arizona meet. That's it. 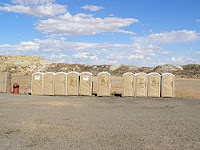 There's another Four Corners in the U.S., of course -- one in Virginia that brings together that state, West Virginia, Maryland and Washington, D.C. (click here if you're interested in the location of that one) but that one never receives as much press, perhaps because the landscape isn't as barren (can't say for sure, since I've never been that one).

Anyway, this experience is mostly about the "been there, done that" variety. The land itself is owned by the Navajo nation, and to get in you pay $3 per car to get in. You park, you go up to a small area surrounded by flags that holds a marker where the four states intersect, you take your picture, stand on the marker, take pictures of others in your party standing on the marker, peruse the stalls (about 20 in all) selling fry bread, T-shirts or various Navajo knickknacks, go into the Visitors Center for a short spell (which has a brief history of the place, along with more knickknacks for sale), use the port-o-potty and leave. 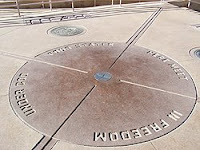 That's about it. Takes 15 minutes at most per visit, as long as you don't have to wait long to take your picture. If you see tour buses there, then you may want to be patient (or pushy) with your picture-taking.

Yes, a bit of a let down, but then again you're kind of glad you went because at least you can say you've been there and now you can honestly tell other people who are contemplating visiting it that it really isn't worth a stop unless it's on your way somewhere. 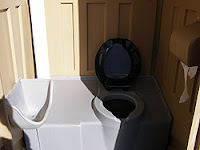 And of course, they in turn will say treat your remarks just as I treated the ones I was greeted with before my visit. So it goes.

Anyway, the port-o-let I visited here, like the monument itself, was nothing special. A standard port-o-let, through and through. It was about as clean as any port-o-let gets on the inside. Beige plastic unit with beige plastic walls, a beige plastic swinging door with a metal hinge lock on the door, a side receptacle for peeing, a central toilet filled with blue chemical water and mounds of human waste. And two full rolls of toilet paper, which indeed is a a rarity for port-o-lets, since their toilet paper supplies tend to run out. 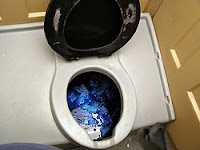 The pee receptacle was crusted with various dried elements, making that a bit of a ghastly site. As was the sheer mammoth amount of waste in the toilet hole itself.

But the smell wasn't any worse than any of the other outhouses I've been to and in some ways it was a bit cleaner than some of the indoor toilets I've been too -- though not by much.

Even more amusing, I thought, was that this outhouse was more out in the open than the horrid toilet I visited at the Southwest Indian Traders (about 25 minutes away), which was attached to a building, yet this port-o-let was far less shoddier in in terms of construction and far less draftier than that one. Go figure. 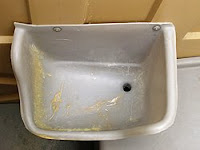 As a bonus, it should also be worth stating that the port-o-let here was no better or worse than the one I experienced at a fancy wedding in Winter Park, FL some years back. Which of course tells me that the port-o-let experience does not change across income brackets. Spend more, spend less -- it's still a port-o-let, right? Right.

Well, except maybe for one thing: The Four Corners port-o-let I visited had GPS tracking, and the one I visited at the fancy wedding in Winter Park, FL did not. For that alone, I give the edge to this one. 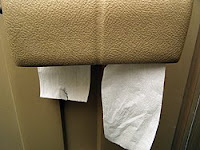