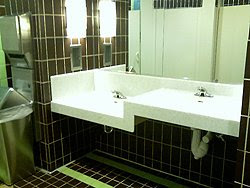 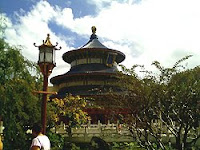 Once in China, head to the side of the Pavilion that borders the Norway Pavilion (but you're still in China -- just the back border of it) and head towards the recreation of a mammoth Chinese temple there, which in itself is surrounded by a pretty pristine garden area. 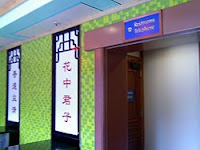 Walk along that back pathway there. About 100 feet in, you'll see the semi-outdoor dining area to the Lotus Blossom Cafe. Keep going forward and you'll come to the entrance to the restaurant, . Go beyond that and you'll enter the area's shops and attractions, which are nice but not the focus here.

Once inside, go left, into the dining room, and head to the back wall of the place. Once there, you'll see a hallway opening with a blue sign above it reading, "Restrooms."

Go down that hallway (it's a pretty long one, to be honest). The first door you come to is the men's room, the second is the women's. Beyond that are supply closets and behind-the-scenes passageways for employees. 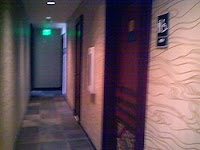 Design-wise, the China Pavilion is pretty impressive. The gardens are indeed immaculate, as is the faux architecture constructed here. It looks like you've stepped into a well-kept tourist site in mainland China.

The main attraction here is the CircleVision 360 movie showing the many shapes and spectacles of China's natural landscapes, which indeed is a wonderful show. Also worth seeing is the acrobatics demonstration put on here several times a day in the very front of the pavilion, which showcases some wonderful theatrics.

Each EPCOT World Showcase pavilion tends to have a casual dining spot and a high-end one. The Nine Dragons is the high end spot here, and the Lotus Blossom Cafe (as you can tell from the description above) is the casual eatery. 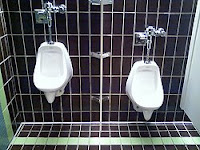 I should say that I did not eat here -- nor have I ever eaten here -- though the smells I walked through seemed pleasant enough. The menu, what I saw of it as I passed, appeared to be filled with the standard fast food Chinese dishes, as well as a couple of specialties. Can't say if it's any good though.

What I can say, however, is that the bathrooms are very unique. Unique in a way that reminded me of the bizarre design touches found at Bloomindale's Orlando, only just not as extreme. But like that place, the design here lacks a good deal of practicality. 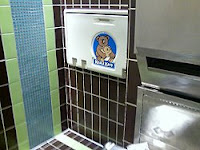 Visitors here will find a decently sized square-shaped bathroom with two toilet stalls, two sinks and two urinals. Setup of those items is a bit strange, though, as it all seems to be built on a high/low principal of Feng Shui. (Note: I'm not expert in Feng Shui, but I do know it revolves around space and patterns used within that space.)

For example, it's got one urinal lowered for kiddie visitors and one up higher for adults. Perfectly normal if you think about it, because that's pretty common -- and surely not as extreme as IKEA Orlando, which has an entire corner of a bathroom lowered for kids

But then the same idea gets put on the sinks, which have one high sink and one low sink. And both sinks are part of the same counter. Again, not too bad, except that the lower one has a tendency to pool water because of its design. Double that with the fact that kids don't think about the mess they make and what you get is a near lagoon of spilled water found on the lower sink. Looks good, sure, but it's not practical. And the inclusion of automatic sinks didn't help either, if you think about it. (Many soap pumps, however.) 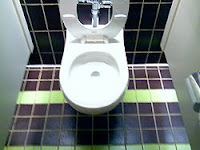 The toilet stalls don't follow the high/low principle, but they do adopt the large/small concept since one is a handicap stall and the other is regular. So, if you stretch the idea some, it fits as well. (Automatic flushes all around, by the way.)

Other strange design choices include a front atrium area, which like the one in Bloomindale's Orlando, just feels totally unnecessary, and the baby changing area, which has been crammed into the back corner (beside the paper towel dispenser) so that, if it's in use, it both corners the baby and parent using it (because of people coming to get towels to dry their hands -- and they'll need to after seeing that waterlogged sink) and blocks access for others to the paper towel dispenser, since no one will want to get close to the baby as its being changed. Seems like the baby changing station should be moved to the front atrium area, since that has no purpose as is.

A more dangerous design flaw can be found inside the toilet stalls themselves. The coat hook inside them has been placed next to the door lock. This means that if you're getting out, you have to avoid the coat hook otherwise you'll run right into it and hurt yourself. Not a big deal in the handicap stall, since there's more width there, but the regular stall is narrow and performing such a maneuver isn't as easy as it looks given the limited space. 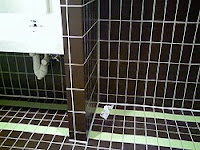 And then, on top of those flaws, is the the color scheme, which sticks out quite pronouncedly here. In fact, it's so off color and clashing that you may find yourself squinting while you're inside. And it's especially bad because of the overly bright lighting used here.

Now, I should say that I'm not opposed to unique colors in a bathroom. Sometimes it even works to the bathroom's advantage, like at the Barrier Island Center in Melbourne Beach, FL or (in another direction) Bongo Java in Nashville, TN. Here, however, the desire to appear unique has backfired significantly.

The walls are covered in deep brown tiles, but the highlights are bright lime green. Very clashing. Makes it look like you stepped into an exhibition that was only partly done, if you know what I mean. 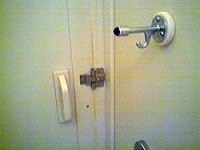 Now I know this might work in the restaurant's dining room -- and it does to an extent -- but in a more confined area, where you can't look beyond the tacky decor and onto something more worthwhile (like a garden surrounding a recreation of a Chinese temple), it feels nightmarish. (Perhaps if you'd done something unique with the lighting, like what Teremok in St. Petersburg, Russia did, it would have lifted the effect into cute novelty status, but that isn't the case, sadly.)

Odor-wise, the place isn't bad -- some urine in the air and some dankness from the water, but nothing too bad. It's kind of expected to have some stink in a theme park bathroom, after all -- that was the case with Universal Orlando Islands of Adventure, after all. Also, there was some trash on the floor, however, as well as a good amount of water around the sink area (as stated earlier).

5. At its heart, a decent bathroom, but the design eccentricities have totally backfired here, making it somewhat unpleasant to experience.

Change the color scheme, make the design more uniform, clean the place more regularly. Heck, if Universal Orlando Islands of Adventure can do it, why not Disney? Not sure what else can be said.
at 15:59