Outhouse #12: Bathroom at Grand Canyon's Yavapai Point Shows "Your Fees At Work" -- But Is That a Good Thing? 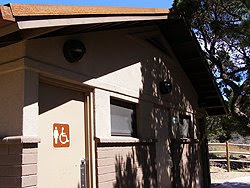 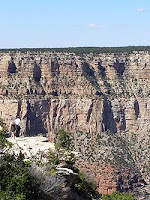 Head to the Yavapai Point lookout inside Grand Canyon National Park, which is a short distance away from Mather Point, which holds the park's most visited (and photographed) vantage.

Once there, round the small parking lot loop to the back side of it and look for the lone khaki-colored concrete building there. Those are the bathrooms.

The parking lot here is considerably smaller than the one at the Desert View lookout, which is strange because this stop feels about three or four times as crowded as that one. As a result, parking here can get pretty sticky -- best bet is to follow the loop to the end and park there, then walk up to the canyon rim (about 250 ft. at most), as this will allow for a less stressful time finding a space and leaving the lot. 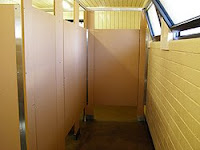 The toilets here are pretty straightforward in construction. It's a concrete building, medium sized, with a brown roof. Men's room to the right, women's to the left. Unlike the Desert View lookout bathroom, the ones here actually blend in with the landscape around them (must like how the bathrooms at the Temple of Sinewava stop at Zion National Park do), and they certainly convey the western motif found in much of the rest of the park. 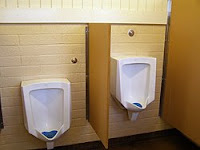 Inside, they are pretty predictable and archaic. You walk in, and the sink station is to your immediate left. Beyond that are two urinals, and beyond that are three toilet stalls, two regular and a handicap in the very back. Beige-painted metal dividers (the same color as the metal entrance door to the place) separate the stalls and urinals. The bottom half of the walls are concrete, painted a dark beige, and the top are wood, painted a lighter beige. The floor is painted concrete - also beige, albeit a darker shade than the others found here.

The toilet stalls aren't anything special -- white porcelain commodes with plastic toilet paper holders, nothing more. The handicap stall is pretty roomy -- bigger even than the over-sized stall found at the Main Street Brewery in Cortez, CO, the green bathroom toilet stall at Eddie McStiff's in Moab, Utah, or the one at the Kolob Canyon Visitors Center in Utah. 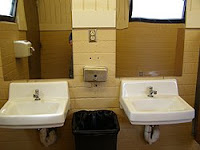 The sinks are white porcelain, as are the urinals; both look and operate like relics from the pre-automated flush days, especially the urinals which utilize the old push-the-button-in-the-wall means to flush them. The sink has that push-the-faucet-button-to-start-the-time-limited-water-flow faucet on it, as seen at JFK's Delta Crown Room or IKEA Orlando, only not as effective as those.

The place is somewhat brightly lit thanks to the line of windows set along the top perimeter of the place. It's a bit dank regardless, due mostly to the concrete construction, but not nearly as cave-like as the Desert View lookout bathroom (or the bathroom by the small duty free shopping area at Pulkovo International Airport in St. Petersburg, Russia -- perhaps the most cave-like toilets I've been to). As a result, it's a little musty in here, though surprisingly I didn't smell much in terms of urine or other waste in the air, for which I was thankful. It's a popular stop at the park, so I kind of expected some stink here. 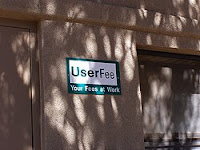 It's clean too. Some spilled water, but that's unavoidable in a bathroom where you can dry your hands only with hand driers (on the front wall).

Most surprising of all is the sign outside the door reading "User Fee: Your Fees at Work," which implied to me that this bathroom gets some sort of special funding. I didn't see this in the Desert View lookout bathroom, though I can say there is a definite difference between the cleanliness of that one and this one.

However, with that special funding help, you wonder why everything here is so antiquated. No automatic flush, old-fashion soap dispensers, old-looking sinks. It's very dated here. Why? Even the amenities at the Desert View lookout bathroom were considerably more modern -- and they didn't have special funding. What gives?

6. A decent, though unremarkable, place for a pit stop. The amenities are quite antiquated, though.

How about making those fees do a little more? How about some color on the walls, like images of the canyon and such? And how about updating the urinals and sinks -- these look like they are the same ones that catered to visitors from 1954.
at 14:14