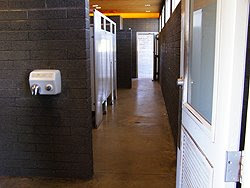 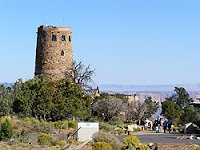 When coming from the west into Grand Canyon National Park, and using HWY 64 as your entrance route, Desert View is the first viewpoint you will come across.

Once there, park your car in the vast lot found there and make your way to the canyon itself. As you walk, you'll see signs leading you to the bathroom, which will be the first building (it's a gray concrete building) you'll come across while heading towards the canyon. If you reach the Desert View Trading Post, you've gone too far -- turn around and go into the building behind that -- that's the bathroom. 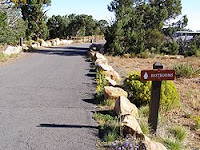 Those coming in from the park's main entrance sometimes forget to journey to this part of the park, mostly because its the furthest east of all the viewpoints and away from the central action of the Grand Canyon Village. That's not to say it isn't crowded -- it's very busy, but tame in respects to the hustle and bustle found in the Village, which is downright urban by comparison.

Also, Desert View's vantage is not as epic as some of the others, as the view asks you to look left, into the canyon, instead of giving you the epic canyon view most people expect to see the canyon hit them head on the instant they step up to the rim (like at Grandview Point, Mather Point, Yavapai Point and the view of the canyon from El Tovar Lodge, my favorite of the lot). Not that it isn't vast, it's just that viewers has to work a little from this POV. Also, it offers terrific vistas of the desert beyond the canyon, including shots of many of the tall mountains you've just driven through to get here. 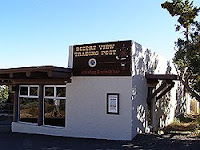 Still, the stop has a distinctive western feel. It's sandy, brown, and is centered around the Desert View Watchtower, which is historic stone observation tower filled with Native American crafts. It boasts some terrific views into the canyon (best for looking out into the desert, if you're asking me); just be willing to climb up to the top (about 50 steps, essentially) to experience. There's also a "trading post" here, though it's nothing more than a quick bite cafe and souvenir shop for tourists.

The toilets here are found in a monolithic gray building that kind of ruins the western vibe of the place. It's a large facility, with the women's room being on the back end (length-wise) and the men's room being closer to the main path. 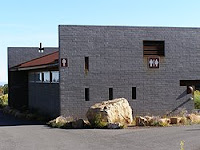 The setup is pretty Teutonic: There's a front and back entrance, and essentially the offerings mirror each other from the entrance inward. Going inside, you first come across a small sink station, featuring two white porcelain sinks and two small mirrors overhead. Each sink has an old-fashioned pump soap dispenser above it (not quite as antiquated as what was found at the Red Canyon Visitors Center, but close). Some hand driers are fixed to the walls to the side of the sinks.

Behind that, closer to the center of the bathroom and behind a concrete half-wall divider, is a string of urinals, separated by beige-painted metal dividers. These are also white porcelain but do not have an auto-flush feature (which puts them in the same boat as the bathroom at the Zion Canyon Main Entrance Toilets in terms of non-environmentally friendly bathroom items being employed here). 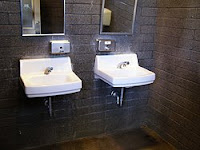 Beyond that, taking up the center of the bathroom, is a row of about eight toilet stalls, each separated by your basic beige-painted metal stall walls. Again, nothing special here. And the pattern continues on the other side, with the urinals following the stalls and then the sinks again.

Unlike the Zion Canyon Main Entrance Toilets, which have a similar layout, the room here is long and lit by a row of windows built just below the roof line. Not too dim, really, though on a cloudy day you can see it becoming very shadowy here.

The walls and floor are painted concrete, and both doors on both sides of the place were wide open upon my arrival, making the place pretty drafty in its central walking areas. Not as drafty as the air-tunnel-like experience I had at the Southwest Indian Traders, but not far off.

Also, the tunnel-like design here lends a strong echo to whatever is said. If you're talking by the entrance, even if you're just outside the door, and even if you're not shouting, expect your voice to be carried down the way. More than anything, this is a cave.

But the draftiness eliminates most of the odors and the place was clean enough too, though there was some water spillage on the floors and a general dankness to the air of it (again, very cave-like).

6. A definite step above the Zion Canyon Main Entrance Toilets, but not by much.

The place is pretty drab in design and decor, so a little playfulness (some wall decor, etc.) might make it more comfortable. If not that, then at least consider closing the doors some so it isn't so drafty and the conversations of the people outside aren't as noticeable to the people inside.
at 14:44