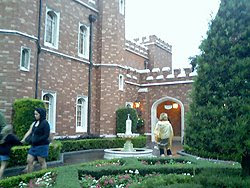 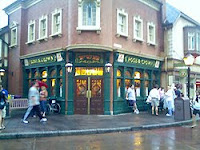 This is pretty deep inside Disney's EPCOT theme park.

To get here, head to the United Kingdom Pavilion. Once there, look for the Rose and Crown pub, which is pretty much in the center of the pavilion. When you see it, look across the street, and you'll see a quaint little English garden set before a structure that looks a little like Windsor Castle.

There's a set of archways at the far end of the garden -- the bathrooms are inside those archways. (There's also a sign on the central street there, indicating which way the bathrooms are, as well as which way the Rose and Crown Pub is, in case you need to get back there and can't quite remember where it is.... for obvious reasons, of course.) 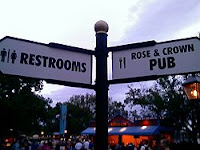 Like with the China Pavilion at EPCOT, the United Kingdom Pavilion houses a small array of structures that sum up traditional English experience for the non-initiated. There's the Tea Shoppe (notice the spelling of "Shoppe" -- doesn't that scream "English?"), the Rose and Crown Pub, a fish and chips place, some quaint gardens, windy streets reminiscent of a quaint Cotswolds village and architecture that looks like it was modeled after postcards of famous castles, like the aforementioned Windsor dwelling.

The pavilion itself makes for a nice diversion, but unlike China Pavilion, there isn't any attraction here (no movie; though there is a Beatle-mania-type show a few times a day) and no fine dining restaurant, unless you count the pub here as being fine dining. (It's got table service, and it charges $9 per beer, whereas the fish and chips place is just a fast food counter.)

The bathrooms look nice on the outside -- as said earlier, the architecture outside them is reminiscent of Windsor Castle and the like. Inside, however, they are just your standard mass market multi-person toilet -- nothing special. They're very hectic and busy too because they sit in the dead center of a busy thoroughfare between the France and Canada Pavilions, both of which have great fine dining restaurants and decent attractions to see. 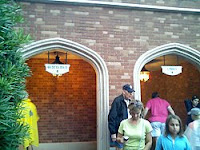 Of course, given its bland interior, I can't complain on its lack of ambition as the bathroom at the Lotus Blossom Cafe in EPCOT's China Pavilion exhibited too much ambition and as a result created a somewhat unpleasant toilet environment. So there is something to be said for having a straightforward practical restroom on premises.

But at the same time you're letdown by the fact that the outside of the place has lots of personality and the inside doesn't.

Anyway, this is a long, rectangular environment. When you enter, you first face an area of sinks and counter spaces (for changing babies and such). Turn left from there and you see a long stretching room with a long row of urinals on one side and a long row of toilet stalls on the back, with the handicap stalls being in the back corner. (Why they are all the way back there, since it makes it hard to get to for anyone with disabilities, is anyone's guess?) 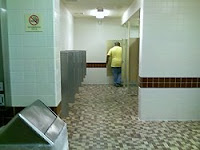 Regular stalls are average in size and are divided by beige metal stall walls; the urinals are separated by stainless steel dividers. Because of the shape of the place, and the fact that many people visit here, anyone in the stalls will have to endure lots of noise and activity. During my visit, I encountered lots of shouted conversations and many kids, who ran around frantically, bumping into things and having water fights. This was actually what I expected to experience at the Spiderman toilets in Super Hero Island in Islands of Adventure, to be honest -- just kind of a bathroom free for all, if you will.

The sinks, urinals and toilets all have autoflush (soap dispensers are manual, as is in all Disney parks bathrooms, it seems). This isn't a bad thing to have in such a frenetic environment. The place is brimming with spilled water and paper and other trash (even though it's frequently cleaned by the crew -- just too hard to keep tip top when this many people flush in, I guess) so the less I have to touch anything, the better. 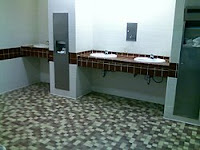 The decor is pretty Teutonic, with an off-kilter brown and white-tile checkerboard pattern on the floor and white tiled walls with a black tile highlight. Again, nothing exciting -- pretty plain Jane, like what we saw at the Grand Canyon's Desert View bathroom or at TooJay's Original Gourmet Deli in Orlando. No bits of cozy English culture, no personality whatsoever. Soulless and bland and very hectic.

A little of that would have been great -- I'm not asking for something as eccentric as what we we saw in the bathrooms outside Westminster Abbey or Bleinhem Palace, or even something as high end classy as the majestic Lumley Castle Hotel, but at least some effort to mimic the decor of the Pavilion outside would have been nice. 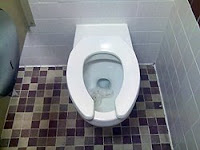 5. Would have been higher had the place not been so filled with frantic children, water, and trash and shown a little personality.

Clearly, the cleaning schedule you've placed this place on isn't enough -- you need to double the crews here to ensure it stays clean, because it's a crowded mess as is. Also, adding some decor would soften the blow of overcrowding and messiness some. Look at what was done inside the bathrooms at the Paris Las Vegas for some inspiration, or the Lost Continent Toilet at Islands of Adventure.
at 16:06