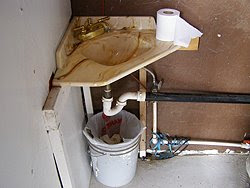 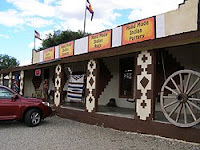 Not in the store.

Rather, when facing the front entrance, head to the right (southeast) side of the building. At the end of the front corner, turn left. You'll find two abandoned 1950s-styled T-birds (at least, that's what they looked like), sitting one in behind the other against the side of the building. Behind them, in a second building, is a rust-covered storage area and garage -- don't go there. 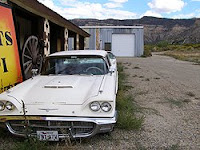 Rather, walk past the two cars (to the right of them sit two wooden frames to tipis, each of which in their center have the rusted framework of what looks like a Civil War-era cannon or some piece of dilapidated farming equipment or something (couldn't tell, they were that rusted and decomposed), and towards the dramatic landscape of the Mesa Verde plain behind that.

At the far end of the main building, you'll see a scary-looking door to your left which leads to a small little closet that's been built onto the outside of the building. That's the bathroom. No fooling. And yes, it's pretty scary inside. 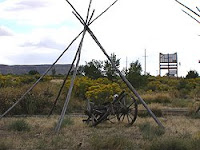 This artifact and souvenir shop located about 10 minutes south of Cortez, CO is a nice, humble warehouse-style building filled with an assortment of area-made Indian crafts (by the Ute tribe, which inhabits the region). Prices are reasonable and the personnel is pretty friendly. A very casual place that doesn't seem to put on my airs about what it sells and who it sells it to, but still pleasant enough.

I wish I could say the same about the bathroom here. This is a small closet room built onto the side of the building as an afterthought. There isn't much here in terms of offerings or niceties. There's a white porcelain toilet that looks like it was picked up on the cheap, a brown and white patterned porcelain sink that looks like it was purchased on closeout or donated, a roll of toilet paper (only one), and a few pipes that extend from the ceiling into the sink and commode respectively -- some of which are supported by rubber bands and straps. 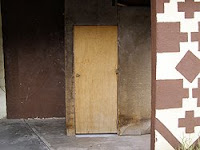 Clearly, this is where the tourists are directed to by the staff in their time of need, as there isn't another place to visit for miles on this road. I imagine the employees' toilet inside is much nicer. Not that this place is very dirty. It isn't. It's just not tended to. And that's very apparent the instant you step inside.

Looking up, you can see where the roof rafters were extended to make room for this place, along with plenty of coagulated dust and some leftover spider webs. There are no walls, just support beams to the main building and two-by-fours. The floor is concrete -- part of the concrete terrace that wraps around the place and also doubles as its foundation -- and is stained in parts from water and other forms of spillage. The door is just a piece of plywood slapped onto some other pieces of plywood as a means to create a chamber, and it has a sliding latch to lock it, nothing more. A lone light bulb hangs above everything -- the only light here, outside of the natural light, that is. Beneath the sink is a bucket lined with a plastic supermarket bag -- not sure if it's supposed to be the place's trash can or if it's there to catch any water seeping out of the plumbing. 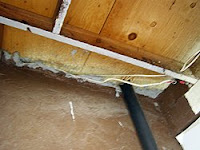 This makeshift construction, of course, gives you little separation from the outside world. Being this is mountain country, the air is pretty drafty, and while you're sitting on the pot here, already feeling pretty gross about the situation you've found yourself in, and you feel the wind blow through the cracks in the walls and against your bare skin, believe me that you feel very naked and exposed to the world. It gets pretty drafty and cold in there, that's for sure. Likewise, you hear the traffic pretty loudly when it passes on the highway outside.

Really, this is the shoddiest bit of construction I've encountered since my visit to the Zion Canyon Main Entrance Toilets and Babys R Us in Orlando -- and those places look downright palatial compared to this one. 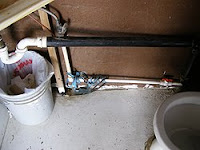 Of course, I've labeled this place as an outhouse when in a way it really isn't -- it has indoor plumbing (well, sort of -- the toilet flushes, but no water comes from the faucet when you turn it, so make sure you've got some hand sanitizer with you, because you'll need it). But you feel the elements so much here that in a way it can also be considered an outhouse -- only there are many other outhouses I'd prefer to visit over this "indoor" facility. 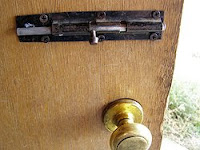 On the plus side, there is little of foul smell here -- but that's mostly because the draftiness of the place ensures odors don't stay inside the chamber for long. I guess that's a plus, right?

1. A truly terrible experience -- a sad compliment to an otherwise charming knickknack store.

Clearly, this room isn't a priority to you, so I'm not sure what could be done to fix it up if you don't care about it. 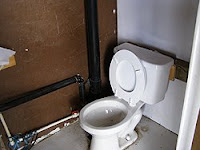 Perhaps the easiest thing to do is to just put up a proper outhouse in the parking lot, which would actually offer considerable more comfort. Then again, those things can be expensive, so perhaps the thing to do is put up some drywall to hide the plumbing and rafters, put in a proper garbage can, make sure the water to the sink actually runs, seal up the gaps in the door, and perhaps even put up a poster or two on the wall to add a bit of local color to the place. As is, it's probably the worst toilet I visited this year, sorry to say.
at 15:46