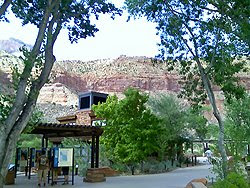 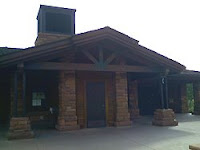 Drive up to the main visitor's center, park, and make your way to the central information building and gift shop.

Along the way, you'll see signs for the toilet -- not the ones inside the visitor center but the building set up amid the outdoor displays and such.

Follow those signs as best you can -- there are many distractions and people around you to divert your path, and the signs on the main path are only partially accurate, as they sometimes tell you to turn left and head into buildings that really aren't the bathrooms.

Either way, eventually after walking in circles some, you'll come across a large wooden building that looks like a stately rangers lodge. That's the toilet -- discernible only by the small man and woman icons found on the main approach and doors. (Clearly, this is a situation where you'd want to have the icons be enormous, like what's done at IKEA Orlando -- something to think about when renovation time comes around.) 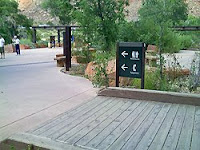 On the outside, this place looks stately, classy and old fashioned -- like an upscale log cabin sort of complex, and it instantly reminded me of the Wayne M. Densch Discovery Center toilet at the Central Florida Zoo.

But the similarities end once you step inside. Really, this has more in common with the toilets at the trail head to the Temple of Sinewava area of the park than anything else. 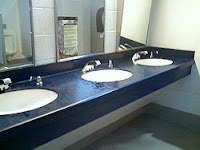 These are dark, cavernous bathrooms, lit mostly by natural lighting via the skylights built beside the main beams in the rafters. Because of the placement of the skylights, the light beaming in has too many angles and corners to contend with before it reaches the common area, and as a result the place is filled with more shadows than it should have, even on a sunny day -- especially daunting in the toilet stalls, believe it or not.

The cave-like feeling extends to the whole place really, which is surprising, considering the size of the place. (It's the most cave-like bathroom I've been in since my stop in Pulkovo International Airport in St. Petersburg, Russia.) 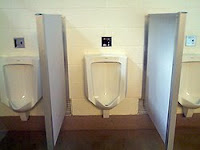 This is a large bathroom, and the setup here is similar to the ones found at the toilets at the Ft. Drum and Port St. Lucie rest stops on the Florida Turnpike. Wooden on the outside but mostly concrete (painted of course) on the inside. You walk in and then choose to go either to the left side or the right side, with both wings housing a similar assembly of offerings -- in this case, it's three toilet stalls along the center wall (the wings are mirrors of each other based off that center wall), three urinals along the outside wall, and a three-sink vanity area to the side of the urinal row. 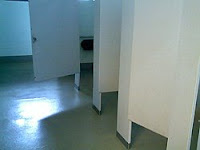 What interesting is that the toilets, urinals and sinks are all automatic and sensor-driven (the soap pumps on the vanity are not) but there is no semblance of an environmentally friendly toilet system in place -- like what you'd find at IKEA Orlando, Nona Sushi and Whole Foods South Orlando. As a result, the place (with its natural lighting and concrete construction) feels somewhat cheap in construction. Not as bad as, say, Babys R Us, but still cheaper than it should be. Why spend the money on some things but not close the deal, you know?

The toilets, urinals and sinks are all white porcelain. The vanity is similar in setup to its brother at the Kolob Canyon Visitors Center, except this is black in color and that's red and this has three sinks instead of two (which that one has). 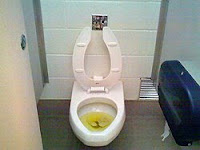 The air here is dank and quite ripe with the smell of urine -- just like its cousin near the trail head to the Temple of Sinewava area of the park. Though that one does smell a little worse, if you were to compare them side by side.

This one is a little cleaner, too, but not by much. Though the toilets were automatic, I found a couple with waste still in them, and there was a good deal of spilled water on the vanity and floor.

It's also a noisy place, considering the traffic and the many open areas (screens along the top, by the skylights), making it a surprisingly non-peaceful place to make a pit stop. Lots of echo here, due to the cave-like design. Go figure. 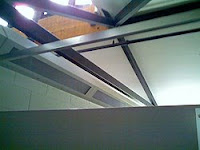 Note: The left half of the bathroom was quieter than the right on my visit and seems to have done less service that day, so I'd opt for that if the choice were presented to me.

5. Further in the park, you expect things to get a little shoddy, but not in the well-traveled and well-manned main entrance, where most of your traffic comes through.

I would insert some regular lighting in the place -- if you're using electric flush systems, I don't see this as being much more of an add on. And perhaps add a fan or two into the mix, just to trump up the ventilation factor -- I know it's an outhouse and should smell a little but not this bad. Really. If you're only going to spend part of the cash you have on amenities, at least make them count.
at 14:04