Outhouse #7: Red Canyon Restroom About As Smelly As Can Be 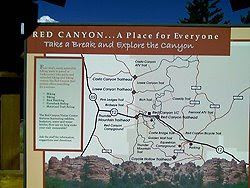 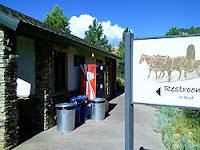 Park in the lot and while facing the main visitor center's building, look to your left. There, you'll see a map of the area and its many trails.

Behind the map is a sign pointing to the restrooms, which ironically enough are just a few feet to the left of the sign. One of those "duh" moments, if you will. 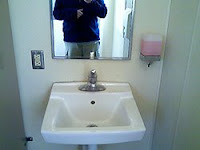 Anyone traveling by road from Zion Canyon to Bryce Canyon will pass through Red Canyon on the way. It's about 10 or so miles from the entrance road to Bryce, at the intersection of Scenic Byway 12 and HW 89 in southwestern Utah. It's certainly a worthwhile passageway.

Red Canyon looks a lot like Bryce Canyon, in that it's filled with that parks famous hoodoo structures. Only the rocks here are more red in color and the parks lets you travel through the canyon from the bottom, instead of from the top, as you would at Bryce. As a result, you can experience the sculpted look of the rocks from a different angle than you would at Bryce Canyon. 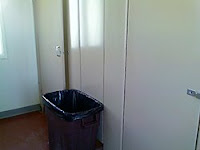 Unlike Zion, which also positions you on the bottom of a canyon floor surrounds you with rock formations and makes you feel closed in, the spaces here are wide, open and laid back. There's a lot of road and foot traffic here, and a lot of RVs (the place is legendary for its camping and stargazing), but rather than feel overly congested (and don't get me wrong, the traffic gets a bit sticky in parts, mostly when people drive through the arches cut through the rock in places) it has a feel of a small, friendly western town. Definitely worth spending a few hours here before heading to Bryce, if you can afford to do so. 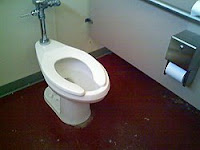 The bathrooms here are another story. On the surface, they are very reminiscent of the ones experienced at the Kolob Canyon Visitors Center, only not as spacious and with more amenities and with better use of space.

However, they are also much, much smellier than those. Really, a very rancid, urine-and-feces-based stink permeates the air here -- and it's so sharp it will not diminish or lessen in intensity as time passes. I was in here for about five or 10 minutes, and that stink didn't go away, and when I finally went outside, I sucked in the fresh outdoor air as if I'd been underwater for too longer and needed fresh oxygen in my blood. Very smelly. 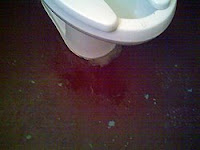 The rest of the place is pretty much straightforward for a national park bathroom/outhouse. The walls are white-painted concrete, the floors are red-painted concrete; both are chipped badly, especially the floor in areas where lots of foot traffic has been (like in front of the toilets and such).

No wall decorations, and there is lighting by fluorescent bulbs and natural light through windows, though on this visit the former was not on. 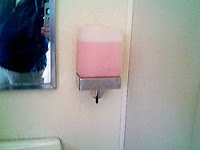 There is also a heater fan attached to the ceiling -- and it looked to be a bit too small for the amount of area it hoped to covered. Can't tell for sure because it wasn't on when I was there, but still it sure made me wonder how cold it got in the bathroom in the winter, especially if you were stuck behind those stall doors and away from the air flow.

Speaking of the stalls -- there are two of them here, both standard in size, with the place's lone trash can sitting in between their entrances. Inside, they feature white porcelain toilets that look to be set in front of the back wall just a little too much to look normal. As a result, the toilets kind of stand out too much -- and not in a decorative way, as seen in places like Sensi. 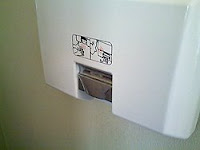 And, as said earlier, the paint on the floor in front of the toilet was badly chipped and some water seemed to be leaking from the commode in one stall, as the floor around it was pretty wet. (At least I hope it was water.)

Off-white steel dividers separate the stall and provide privacy for the two urinals and separate the urinals from the vanity, which is just your simple sink here, nothing more. Pretty bare bones, really. 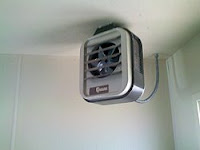 Even the soap dispenser was ancient-looking -- one of those old plastic tanks with a metal put button that seeps soap onto your hand. I thought stuff like this was supposed to be in museums!

The sink is white porcelain, as are the urinals, and it has a regular faucet on it instead of some automatic one. To the left of the sink is an automatic hand drier -- also, very no frills.

The place isn't the cleanest I've been in, but outside of the smell and some leaking water, I saw no discernible trash on the ground. I guess that's a plus, no?

Still, while Red Canyon may be worth a stop, you may want to pass on stopping in these rest rooms unless you absolutely have to.

4. Not very pleasant at all, especially the horrid smell.

There's a draft in here, but clearly the strong odors here indicate that little air circulation is happening. That certainly need to be fixed -- unless, of course, it's a plumbing issue and not a ventilation issue. Also, the walls and floor could seriously use some new paint, and the toilets and sinks could go for a good scrubbing too. And to extend the friendliness of the setting outside, why not put up a few posters or events listings for the area around you.
at 10:00