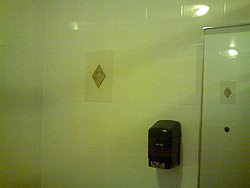 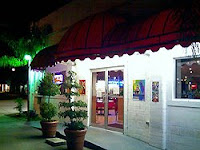 After entering, you will find yourself at the back of the dining room. Take an immediate right, down the white-walled hallway there and you'll come to the bathrooms, which are down that corridor. 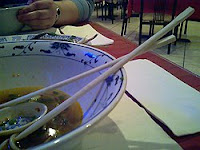 One of the city's better Vietnamese restaurants and specialists in pho, the traditional soothing beef noodle soup that features a clear but well-seasoned beef broth (usually with star anise and rau ram, or Vietnamese coriander), rice noodles, slices of beef (usually lesser cuts that require a long simmer time to tenderize), and vegetables like onion, bean sprouts and chili. Few places in town can match this spot for pho, really.

The restaurant's decor itself is a bit campy. The back wall is made of mirrors, giving the place the impression that it's larger than it is. (Not that it's small -- there are about 50 tables here, along with a stretch bar that takes up most of the west wall.) Windows form the other two walls, giving the people sitting there decent looks of the busy street outside. 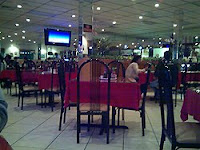 A half-wall divides the dining room in two and serves as a mounting place for many of the dining room's decorations, which include various ethnic trinkets. More items sit in or around the aforementioned bar. A large flat-screen hangs high on that mirror wall, usually televising a sporting event or karaoke. The atmosphere is usually festive and family oriented, though there are also several people who come here just to hang out and watch TV -- and to be honest, for watching a big football game, this place supplies a better setting than a sports bar. Fewer distractions, a more in-tune crowd that isn't as overtly boisterous and delicious food. Watching football with a big bowl of pho from Pho 88 before you is one of this life's great pleasures. 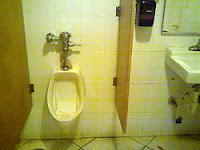 Service is attentive, if a little cold at times, but also speedy. Prices are wonderful -- most bowls of pho run $6-$7 dollars and the regular-sized bowls are enormous (the larger are the size of volcano craters). Other dishes worth getting include the rice noodle bowls, which come with various grilled meats and dipping sauces, and the Vietnamese crepe, a large flourless crepe (it's really just a long, thin omelet) stuffed with pork, shrimp and veggies -- delicious.

Given the amount of windows and mirrors found in the dining room, you half-expect the bathrooms to be somewhat light and airy. They aren't -- they're dark and cave-like. Similar to what was experienced at the Pulkovo International Airport in St. Petersburg, Russia, only without the looming grime and stink. 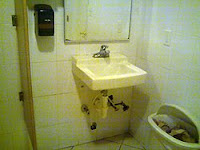 White tiles cover the walls here, with diamond pattern placed sporadically for accent. The floors are covered in standard large beige tile, like what we've seen at places like the Long Point Cafe and Greens and Grille.

There isn't much else of note to report here, decor-wise. The place has one urinal, one toilet in a stall and one sink -- all white porcelain and with the standard basic add-ons. Wall-mounted mirror with no frame, stick-to-the-wall soap dispenser. Kind of bland, really, like Sharky's Shrimp Shack or the aforementioned Long Point Cafe, just with a little more heart, thanks to those accent tiles. 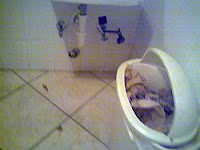 The place is somewhat clean, though I did find a good number of paper towels on the floor and some spilled water, especially around the sink and toilet. More troubling was the paper towels stuffed behind the piping on the urinal, which hinted to me that there's a leak there that needs to be fixed.

Otherwise, the place's most discernible feature is its dim lighting -- not enough to make it hard to see but enough to make the place seem a little seamy, even underground. Quite a contrast, considering the light-filled, airy dining room. 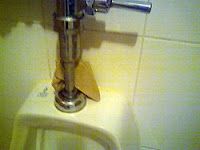 6. Good enough for a 6, but the potential of leaky plumbing keeps the score in check.

Fix that plumbing -- or if there isn't a problem, at least make sure there isn't a paper towel behind any of the pipes. Also, please make it a little brighter in here.
at 14:47