Too Much Style Keeps J. Alexander's Toilet From Perfection 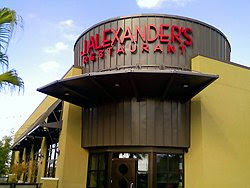 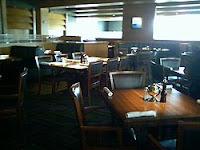 On the exact opposite end of the place from the entrance.

So to get there, you enter, cross the large dining room, passing the semi-open kitchen on the far left wall and the glass-walled wine room on the far right.

Once you reach the very back corner, you'll see a waiter station on your left (this is where the dishes coming fresh out the kitchen get their last bit of dressing for table presentation). Veer right then, walking backward even further, until you see a small cutout in the hall, very dimly lit. Once there, you'll see some ornate wooden doors, one leading to the men's room, one to the women's. 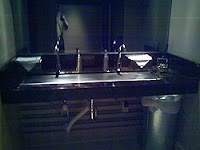 Style is definitely the focus at this upper-class semi-class gourmet chain. The dining room is dimly lit and filled with dark woods, dark carpet, bits of modernist art, sleek metal highlights and a hip vibe. Tables are wide and offer plenty of elbow room, and sitting here reminded me some of the warmth one feels while sitting in a ski lodge's main room (you know, with the fireplace) -- yes, it that's cozy -- only it's not as common feeling as that. Rather's it's like a sophisticated fireplace den. Pretty nice.

The menu works a similar charm, albeit at times it works a bit too hard to achieve that effect. Both the in-house smoked salmon appetizer and house chili (the soup of the day on my visit) proved to be stellar starters -- very good versions of these traditional dishes. Also impressive-looking were the onion rings, which came in a foot-tall tower; sadly, I didn't get to try those. 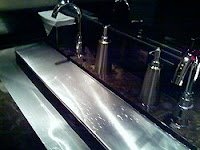 Sandwiches were good but at times got a little too complicated for their own good. The ahi tuna burger, for example, made a strong first impression, with its Asian marinade and toppings of pickled cabbage and carrot, among other things, but those toppings and sauces eventually gave way to pretty bland fish. The same could be said of the Hyde Park, essentially a club sandwich; it started strong (with its freshly baked bread and abundance of toppings) but again ended up revealing some bland basics.

Mains were not sampled because we were there for lunch, though I will say the house mac and cheese was very good, though entirely too rich for any one person to eat -- and if one person can eat that as a side dish, then that person needs to see his/her cardiologist soon after, since the thing was more gooey cheese than anything else in it; very good but very wrong, if you catch my drift. 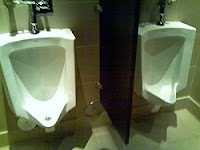 Prices are medium to high, but then again this is what one would call an affordable fine dining restaurant. You can come in shorts and a T-shirt but you can also come for special occasions.

What's a real shame here is that for all the work put forth in the food, decor and service (which is also very good, with waiters hitting you from all angles at times), none of it feels very memorable. Once I was out the door, I had a hard time remembering what I'd eaten. It's all style, if you think about it, and not much substance past the immediate. Some might make the case that this is OK with them, since not all meals need to create memories, but I sense that the place is trying to reach beyond that basic connection with its customers, only that it was coming up short. 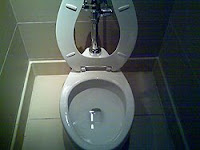 The bathrooms, of course, are very similarly minded to that. They offer plenty of sleek design touches and a few things that make you pause and smile, but at the same time they are all style and little else. And in the case of the men's room, some of that style gets in the way of practicality and proves detrimental.

This is a small, multi-person chamber. Once inside, you'll see a tightly packed multi-station sink station to your immediate left. In the back right corner are two toilet stalls, and across from them are two urinals. 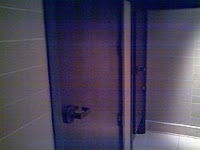 The toilet stalls are in fixed-wall chambers (not the standard separator-wall-created stalls), with floor-to-ceiling doors -- very similar in spirit, but much smaller in scale, to what was seen at the wonderful Paris Las Vegas Hotel and Casino bathrooms. Only, of course, this place has more contemporary design on the door, whereas that place has art nouveau doors.

The toilets are white porcelain and the chambers are very private, though at the same time they are a bit dark -- reminiscent of what was seen at the stalls of the at the Musee de l'Orangie in Paris. 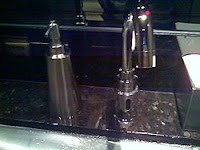 The urinals, also white porcelain, aren't anything special -- a standard area for those, with a nice dark wood divider between the two.

The sink is the highlight of the place. It's a trough sink made of stainless steel, with two faucets in place but only with enough room for one person to stand there comfortably. Standalone metallic soap dispenser sit alongside, with containers for heavy-duty paper towels in the corners. A large single-pane stretch mirror, which accentuates the metallic sheen on the vanity all the more, hangs behind it all.

But as said it's a tight fit here, almost uncomfortably so, and it gets even tighter when you're washing your hands there and the door opens and someone practically runs into you because the door is situated too closely to the sink. 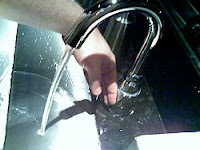 Also, while the faucets are automatic, their progression of flow is too far back on the sink trough. As we saw in the Wynn Las Vegas bathrooms, which have set the standard for trough-styled sinks, the water sprays down against the back end of the trough, which in turn sprays waters everywhere. Something this clean-looking needs to be clean on all accounts, and all that spilled water ruins the facade. Really, if you extend the faucet out from so the water hits the back of the trough, this problem can be solved easily.

Stylish, sleek and sophisticated, but also a bit clumsy in parts. Not sure if you can add more space to the sink area (perhaps fitting it into another part of the bathroom, like to the right of the urinals) but something needs to be done to make it feel less tight-fitting. Even if you're alone there, it's tight. Also, extend those faucets out so the splash from them is lessened.
at 14:12