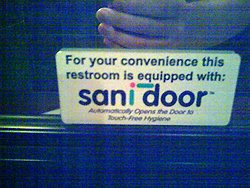 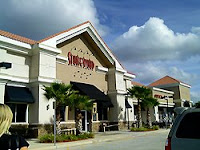 Think of the interior of this place as a large U. At the entrance, you find yourself at the back of the U and facing the hostess station. The dining room is to your left and sprawls backward a good distance, housing in all about 30 to 40 tables. To the left is a bar area -- not as large area-wise as the dining room but still quite sizable, and with an elegant wooden bar taking up the center of it.

To get to the bathroom, go into the bar and wrap around it to the very back. Once there, you'll see a small enclave that houses the bathrooms. (Go past the enclave and you end up in the back of the kitchen.) The men's room is on the right when you enter the enclave, the women's on the left. 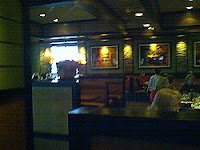 This upscale chain is one of many places these days that offers a modern, sophisticated environment and an upscale menu -- the sort of place that is a cut above the standard family restaurant chain (Friday's, Chili's, Ale House, etc.) in terms of ambiance and menu offerings.

The decor here is similar to other places of its ilk, like J. Alexander's and McCormick & Schmick's -- with its abundance of dark woods, pieces of modern art on the wall, dim lighting, sleekly dressed waiters and waitresses and an overall air of sophistication. 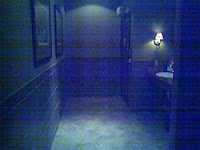 The food is decent -- especially for what is essentially medium-priced dishes (about $5 or so less per plate, give or take, than what's at J. Alexander's, for example) but the food is also a little less inspired than what you'll find at some of its like-minded locales. Not that it's bad (though there are a few hit and miss items), but the emphasis is on the oak grilling technique used here, not (to bring up J. Alexander's again) making contemporary extensions of comfort food. The food here is a bit simpler and more tested and less experimental and unpredictable than what you'll find at its contemporaries. Still good, especially the grilled items, but a little less original. 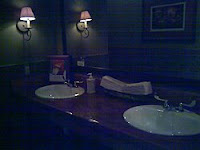 Service is good but like at Avanzare (which I feel is a better overall restaurant but which also has an inferior bathroom) it's also a bit too gregarious on the front end. Following the rapport between me and my waitress, it seemed like I was expected to get the blue cheese chips (which are just french-fried potatoes with blue cheese and balsamic reduction). While I didn't want them, that didn't prevent her from continuing to pus them on me -- and when the rest of the table agreed and we got them, they ended up being too vinegary and soggy. So the key here is to stick to your guns, no matter what (though really you shouldn't have to find yourself in that predicament) 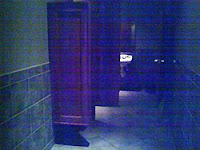 Given the decor, you expect the bathrooms to be similar to what was found at either the aforementioned J. Alexander's and McCormick & Schmick's, in that they either would be very modernistic or modern interpretations of traditional setups. These sort of fell into the latter, with a setup that reminded me -- at least at its most basic -- of what I found at Texas de Brazil. It's a long environment, with a two-station vanity in the main drag (to your immediate left after entering), with two urinals beyond that and two stalls beyond that, in the back of the room.

More than anything, it was the place's dim lighting (as evident in our dark photographs) that proved most characteristic of the facilities. We're talking dark like Shari Sushi, Le Castagne and the aforementioned Avanzare. Only I think this place was even darker than those.

The floor is covered in gray tile with an ornate highlight trim. The walls are dark (and I can't recall if they are tile or dry wall, though I'm leaning towards the latter). The vanity is lit by two dimly lighted lamps, and the rest of the place is lit by soft bulbs placed in the ceiling (a la the Musée de l’Orangerie in Paris). 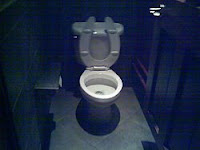 Like those other places I've mentioned so far, the vanity here has plush paper towels and free standing soap dispensers. The sinks are manual though -- no automatic stream. The stretch mirror overhead is flush with the wall and has no frame. In all, it's nice but not quite on par with the elegance seen in similar places.

The urinals are white porcelain and set behind thick heavy wooden privacy barriers -- a nice touch. The toilets, also white porcelain, are fitted into stalls with thick wall-to-ceiling barriers -- not quite as isolating as, say, what you'd find at the wonderful Mansion at Forsyth Park, but not too far off either. Of course, the heaviness of the stall walls is also felt while inside, which makes the stall feel a little smaller than it actually is, but for the sake of privacy it's a sacrifice I'm willing to make. 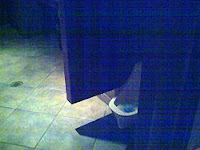 The other highlight here is the Sani-Door mechanism employed on the main door. What this is, simply put, is a sensor that lets you not have to worry about opening the door on your way out and getting your hands in contact with whatever germs someone who hasn't washed his hands has put on the door handle. Of course, it's not a foolproof plan -- there are still other ways you can contract germs (like turning off the faucet -- hence a good case for automatic faucets here) but it's a nice touch. I'm curious to see how it would perform in a high-traffic situation though -- since the door opens a bit quicker than you expect and I can see someone getting bopped coming in or out in the process.

Otherwise, it's a clean place and odor free and pleasant. Just very dark. 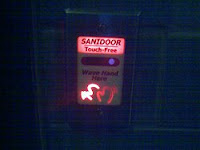 7. Almost an 8, but the darkness keeps that score in check.

First off, please increase the lighting here, making it more bright inside. It's a little too dark for a bathroom, I think. Second, get some automatic faucets and soap dispensers -- this will fulfill the promise imparted by the Sani-Door system you've installed. Adding a piece or two of modern art to the walls couldn't hurt either -- it extends the design of the dining room better into the bathroom.
at 14:31