Hard As It Tries, Bathroom at Encore Las Vegas Doesn't Quite Match Grandeur of Bathroom at Neighboring Wynn 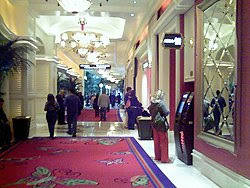 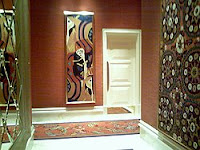 This bathroom is just past the Lobby Bar and is off the hotel's main drag. To reach it, enter the hotel through the main entrance, pass the check-in desk and walk onward, towards the hotel's casino. Along the way, you'll see the pool on your left (through windows) and the elevated Lobby Bar (a swanky cafe/bar environment filled with deep reds, plush patterned carpets and intricate glass work) on your right.

Pass the Lobby Bar, continuing in that direction (which leads to the hotel's Atrium). You will cross a pathway on your right that is just beyond the Lobby Bar; it leads to a sundries shop and the hotel's guest room elevators. Just past that is a sign for the restrooms.

At the sign, turn right and go down a hallway, about 50 feet. At the back, you'll find the bathrooms, men's to the right, women's to the left. 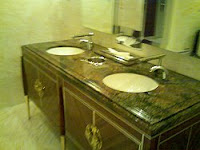 Encore Las Vegas looks very much like its sister property, the Wynn Las Vegas: Although not as tall or wide as that establishment, it boasts a similar-looking exterior composed entirely of copper-colored glass. Inside, those thematic similarities continue, especially in the place’s emphasis on curved walls, lengthy esplanades and elegant chandeliers.

But where the Wynn Las Vegas' décor takes a modern approach to art nouveau, Encore’s design takes many cues from Eastern cultures, primarily China and Thailand. Stepping through the place, you stroll under intricately carved ceiling and chandeliers containing hundreds of pieces of sparkling colored glass. You walk over floors covered with plush carpets and mosaics of dragonflies and butterflies. You pass Siamese statues, modern art paintings and found art, which pack the corridors, corners and enclave of the place. Even the staff (dealers included) come dressed in Chinese-inspired uniforms. 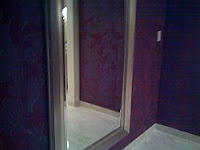 Encore Las Vegas itself carries a sense of intimacy that most other Vegas mega-hotels seem to lack. This is best seen in the hotel’s casino. It’s smaller than most of the gambling floors in town (it houses approximately 65 tables and 860 slots) and has been designed with high ceilings, square spaces, straight lines and natural light (let in through windows and skylights) -- a far cry from the typical Strip casino, which usually features a maze-like design, low ceilings, dim lighting and loud noises.

As a result, walking through the casino to get to the hotel’s other hot spots becomes easier and feels less stressful than expected, which in turn lets you admire the design and artwork around you all the more. 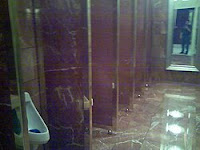 Naturally, given that this is the upscale cousin of the already upscale Wynn Las Vegas, I expected to be blown away by the design-based wonders that would no doubt be found here. I mean, Wynn Las Vegas to this point has some of the best bathrooms I've ever stepped foot in.

But while Encore Las Vegas' restrooms do offer much elegance and sophistication, the "wow" factor here falls somewhat short. More than anything, these bathrooms seem like they've channelled Wynn Las Vegas through Caesar's Palace. Pretty damn good in the scope of things, but still not earth shattering, as you might expect. The hotel itself is literally jaw dropping in its over-the-top-yet-elegant decor and design. The bathroom tries to exhibit those excesses to the same degree here, but a few missteps keep it from achieving that goal. 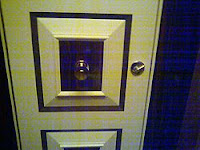 This is a good sized room. You enter, take a quick turn past a ceiling-high framed mirror in an entrance hallway, and find yourself facing the sink stations -- two-person vanities on each side of the room, which is long and rectangular. Think of what was at Amway Arena, scale it down to about 1/3 of the size, and you get the basic set-up of this place.

Beyond the sinks, in the main section of the bathroom, on the respective sides of the room, are lines of urinals and toilet stalls, about six or so of each. What's unique here is that the urinal stalls are floor to ceiling in height and as such provide maximum privacy. They, like the floor and walls and stall divider walls, are made of brick-red-colored granite with gold trim and are quite beautiful. A floor-to-ceiling length mirror, like the one in the room's entrance passageway, stands at the far end of the room, a sort of counterpoint to the entrance mirror. The toilets are your standard white porcelain but clean and new-looking. The urinals are also white porcelain but they also have that thick mesh in them to absorb urine and limit unintended splashing and spraying (like what was seen at the beautiful bathrooms at Bartolotta Ristorante di Mare). 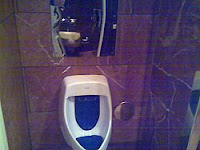 The vanity is very nice but not show-stopping like the marble wonder at Wynn Las Vegas. While I liked the copper spigot-like faucets and the dark marble vanity counters, I found that by placing a box of tissues in the vanity itself (for the sake of convenience) made people want to use the tissues as towels instead of tissues, which of course causes them to disintegrate too fast and create a globby mess on the counter itself. The paper towels were located nearby to that, but at the same time the designers need to realize that people will almost always go for the easiest solution before them -- in this case, it's the tissues, not the towels. Sadly, it's one of the bathroom's major missteps -- a small little throwaway detail that seems nice at first but falls flat upon execution (reminded me a lot of the faucet SNAFU at J. Alexander's in Orlando). 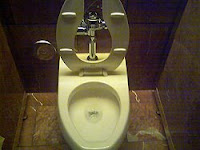 The place's other big misstep is in the urinal stalls. While the dividers offer much privacy, the choice to place the automatic flush sensor on a reflective gold-chrome plate pretty much destroys that aspect. Sure it looks nice, but it's also like peeing while looking at a mirror focused entirely on your giblets -- and anyone who's walking behind you at that moment and decides to peek over can, at one angle or another, get a solid look at your goods. (You know this because you will be able to see them in the reflection off the plate.) It's a little uncomfortable, to be honest.

Yes, it's a beautiful bathroom, and very clean, spacious and elegant, but those few hold-ups keep it well short of what was experienced at Wynn Las Vegas. I was expecting a location that might equal, even top, that one, considering the brand positioning of this hotel. Sadly, I left greatly disappointed -- a real hard thing to admit considering how much I've championed Wynn Las Vegas.

8. Missteps and all, it's a beautiful bathroom, but I just can't raise the score much higher than this, given those fallacies.

Outside of putting a little more "WOW" into the design, and even some technology and showstopping design pieces, the least you can do is move the tissues away from the sink and replace those plates behind the toilets with something non-reflective.